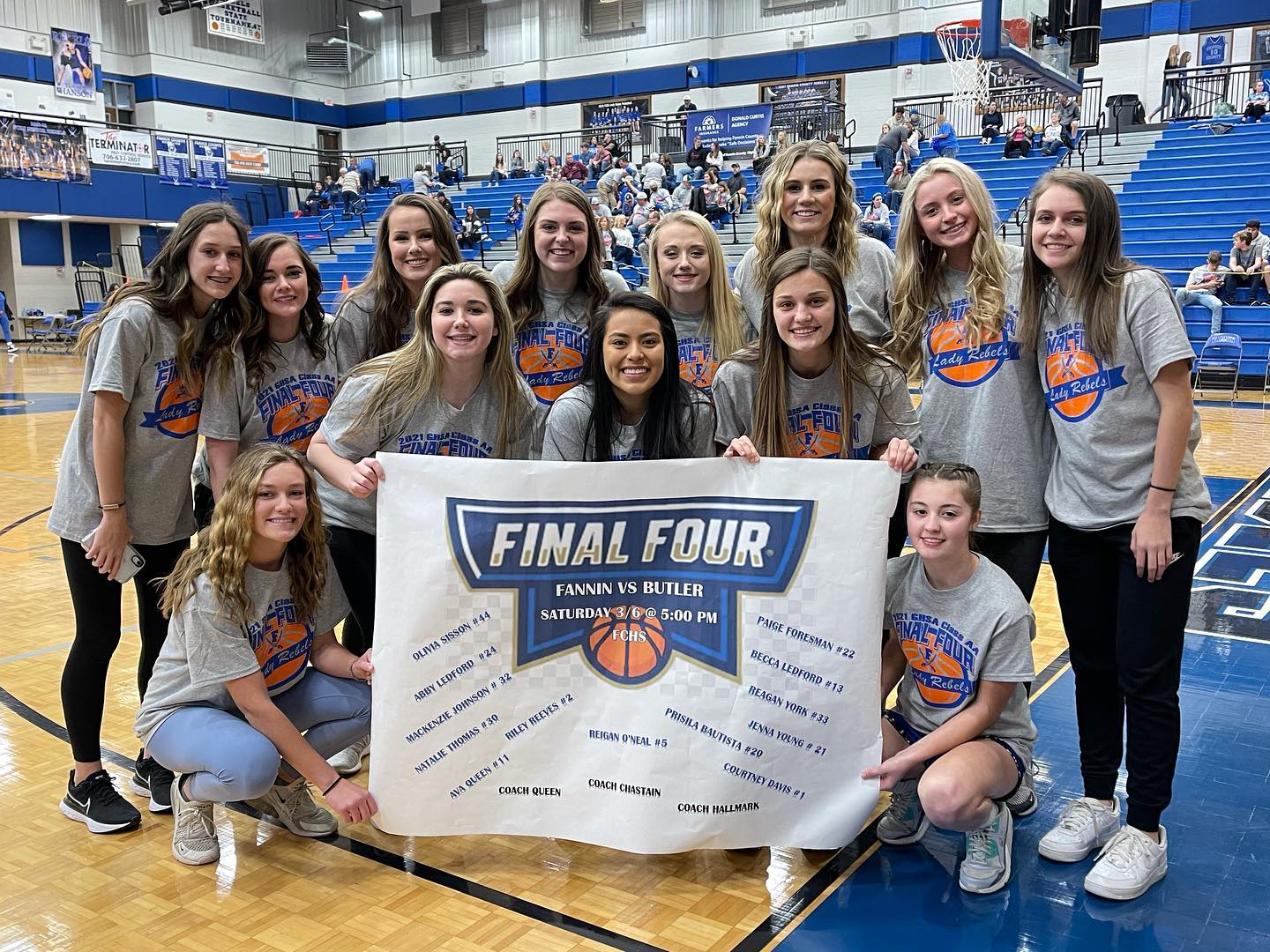 In front of a record crowd, Fannin County defeats Butler 43-41 to advance to the State Championship for 1st time since 2004. Will Play Josey High School at the Macon Centreplex Thursday March 11th 12pm for the  GHSA AA State Championship.

Butler’s Jayla Thomas would score the first 4 points of the game. Regan York would score the 1st 2 points of the night for Fannin with 5:15 left in the 1st. Abby Ledford would come up with a steal and take it all the way off the glass to tie the game at 4. Fannin County would build off the baskets made by Abby Ledford and Regan York as Natalie Thomas would knock down a 3-point shot. Courtney Davis would score her 1st 2 points of the night. And Becca Ledford would have 3 points in the quarter. Olivia Sisson and Paige Foresman  would provide great defense inside all game. Prisila Bautista would also provide good defense as Fannin would go into the 2nd quarter with a 12-8 lead.

In the 2nd Quarter, the Lady Rebels, would get on the board with a basket made by Abby Ledford. Abby would get her own rebound and do an outstanding job of following her on shot and scoring. Abby would also be the next Lady Rebel to score by hitting two free throws. Becca Ledford would continue her amazing performance by picking up a key offensive rebound and getting 2 points. Courtney Davis would score with 7 seconds left in quarter to make it 20-15 at halftime in favor of Fannin County.

The 3rd Quarter Butler would outscore Fannin 16-13. Lauren Brady would score on the first trip down the floor for Butler. Abby Ledford would score the first bucket of the half for the rebels followed by a long 3 Point Shot by Becca Ledford. Butler would score the next 6 points and tie the ball game up at 25. Butler would continue their run by adding a free throw from Paris Little to give Butler a 26-25 lead. Lauren Brady would add a 3-point Shot giving Butler a 29-25 Lead a 10-0 Run. Regan York would end the scoring drought for the Rebels by getting an offensive rebound and scoring. Becca Ledford would get her 11th point of the night at the time by sinking a Three Point Shot giving Fannin the lead back 30-29. Butler would find Thomas down in the paint to get the lead back 31-30 with 50 seconds left. Courtney Davis would knock down a long Three Point Shot to give the Rebels back the lead 33-31.

Lauren Brady would hit a free throw to give Butler the lead with 1:10 minute remaining. Regan York would answer on the following trip down the floor to give Fannin the lead 41-40 with 57 seconds remaining. Brady would tie the game with 38 seconds left by hitting another free throw.

Becca Ledford would attempt a 3 Point Shot with 16 seconds to go and the shot would not fall. Butler would get the rebound and Mackenzie Johnson for Fannin almost created a near turnover but the basketball would go out of bounds with 9 seconds left and a tie game at 41 with Butler having possession.

Courtney Davis would steal the ball with 5 seconds remaining, Courtney threw a perfect pass to Becca Ledford. Becca was able to get the shot off underneath the basket as time expired and the basket was good!

The Video of the Final Play has received thousands of views. Kyle Sandy who is the leader in High School Basketball coverage in Georgia Tweeted the Following about the Rebels Buzzer Beater.  https://twitter.com/KyleSandy355/status/1368340910019346434?s=20