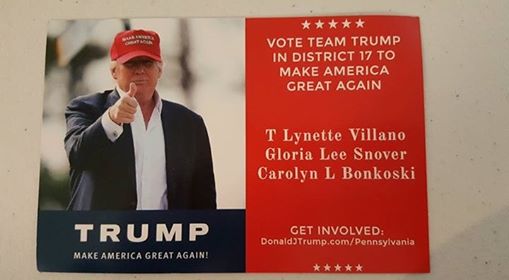 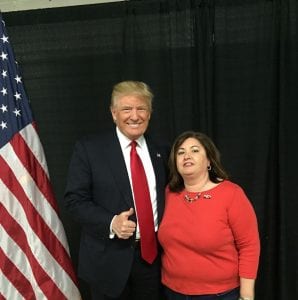 Donald Trump could win Pennsylvania and lose the delegates. If you can’t win at the ballot box then it’s time to go after delegates. All eyes on delegates.

When citizens in the Keystone state go to vote on Tuesday they have to make not one but four decisions when it comes to who they want to represent them at the Republican National Convention in Cleveland.

Pennsylvania has a total of 71 delegates. There are 17 pledged and 54 unpledged delegates.   The state is divided into 17 regions. The Presidential candidate who receives the most votes in the region wins one delegate. If Trump, who has a double digit lead in the state, wins every region it will give him 17 delegates who are dedicated to vote for him at the national convention.

I interviewed a Pennsylvania delegate candidate this morning, Gloria Lee Snover.   Snover met with Trump last week before a rally in Harrisburg where he asked for her support and for her to pledge to vote for him at the convention.  Snover made a commitment to vote for Trump on every ballot. Donald Trump has endorsed Snover for delegate.

Snover told us she has received two phone calls from the Cruz campaign attempting to get her to switch. She went on to say the “Never Trump”  Our Principles PAC and Kasich PAC have been making ROBO calls encouraging people to vote for certain delegate candidates without telling them who the candidate supports.

I have now received 5 robocalls for Tom Whitehead in Congressional District 17 who does not disclose in those calls whom he is supporting. However, those calls were paid for by the following two Political Action Committees: 1) A New Day for America which is a Political Action Committee Supporting John Kasich and 2) Our Principals PAC, which is expressly a part of the anti-Trump or Stop Trump movement (http://www.factcheck.org/2016/03/our-principles-pac/)
[Our Principles PAC-Political Leanings: Republican/Anti-Trump Super PAC Spending Target: Unknown Our Principles PAC was formed in January 2016 to thwart Donald Trump’s 2016 presidential campaign. Its founder, Katie Packer, is a veteran Republican strategist who was the deputy campaign manager of former Massachusetts Go…factcheck.org]

Don’t be fooled by those stealth candidates who while saying they are going to represent you, in fact are going against your wishes.
The real Trump endorsed delegates for the 17th are
#2 T Lynette Villano
#7 Gloria Lee Snover and
#9 Carolyn L. Bonkowski
Proof is on Donald Trump’s Website found athttps://www.donaldjtrump.com/pennsylvania

CAUTION get this out. There have been 5 robo calls for a delegate candidate in the 17th Congressional District that does not say who they are for, but when you look up the PAC that paid for the call it is Kaisch and Never Trump. Dont be fooled by this phone calls. DO NOT VOTE WHITEHEAD. The establishment is funding his campaign.

The Principles PAC who is running the anti TRUMP campaign has been making calls for delegates. Make sure you do not vote for those delegates. They made four calls to my house for one of the establishment candidates. Caution.

Snover told us she has been active in the Republican party since she was twenty five years old working to get Republicans elected.  Although her views are more in line with Cruz, she said it’s time to elect a doer. Below is her testimonial for why she is supporting Donald Trump,

For the last 23 years I have held an elected position in the Republican Party. During those years I work feverishly to get conservative republicans elected; which I am still doing. I am currently Vice Chair of the Northampton County Republican Committee. However, too many times candidates got elected and then went down the establishment or moderate road. Worse yet they completely forgot who helped them get elected or even what their campaign was about. Recently, at a committee meeting one elected official said, “we cannot vote right or we will lose our jobs.” That night I realized I am really volunteering just to get candidates jobs. They will not do what it takes to move this country in the right direction. I am pro life, NRA member, and strong fiscal conservative, but I cannot strictly use that ideology this time. Of course I am more in line with Cruz, but this election is about a man who can break up Washington and the media. I must be willing to cast aside politicians and lawyers and do what is needed to turn this country around; YES a builder/developer. Yes, I think the medicine needed right now is someone who can get the job done; “the doer.” No more conservative speak, but a guy who deals in real. Please do not tell me where Trump stands on the issues because it does not matter. Conservatives please stop debating the issues and go elect a guy who will take the ball all the way down the field and not just five yards.

Forget the media spin and listen to our interview with Snover where she calls it the Pennsylvania Delegate Wild West.