One of the key issues today is education.  Everyone should be interested in all children getting the best well rounded education available. Children are the future and it is concerning to have a growing populace that purposely remain ignorant due to the cookie cutter approach to public schools.

My question is why have the American people allowed education to become a government led agenda?

Initially, when America was young, there was no guideline for schooling. In England, schools were available for the privileged, but not the masses.

The American spirit formed its own brand of education. Children were taught at home or in the homes of neighbors. As communities grew, the one room schoolhouse was brought into play. This building housed the school, served as a community center and often a church on Sunday.

Laura Ingalls Wilder, author of the “Little House” books, became a schoolteacher two months before her sixteenth birthday. She taught in a one room schoolhouse.

The one room school system allowed for the parents and the community to decide on the curriculum and the values taught in the schools. The community that sponsored their own school would have been up in arms if anyone from the government had tried to interfere with their wishes. They accepted some guidelines, but interference would not have been tolerated.

The one room school allowed for a child to go further than his or her own age level. If the child was advanced, they could finish their lessons and listen to the next age level’s work. The community school usually only went up to the eighth grade. This provided basic education.

If a student wanted further education, they could go to a central high school within the county or state.

Standardized tests did not come into play until much later, if you went to school and attended and passed all of your classes, you could graduate.

This system spawned many a leader within the United States. 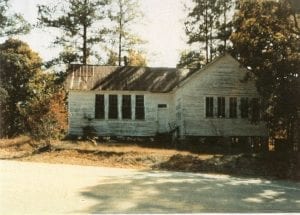 Though his scholastic career was interrupted by family needs on the farm, my Uncle Herschel returned to school later. He later completed all of his studies and graduated from Oglethorpe University. He went on to be the principal in the Paulding County school system.

Herschel Jones Middle School in Dallas, Georgia is his legacy to education, and a tribute to the power of the one room school.

Instead of relying on the government to educate children, parents need to be in charge of the local educational system. More thought needs to be given to how each parent is personally is going to provide education to their children. In this way, the values of the parents, not the government are instilled

Taking back the power of education is key to developing free thinkers.

The Federal Government’s interference has led to teaching to tests and leaving students behind on important basics, especially American History. It is an indictment of the public school system every time some reporter asks college age students questions, like who is on the $ 20 bill. The school systems have taught our young people to be ashamed of our great nation and have misled them on how our country was founded.

When school systems insist on teaching values that are contrary to the values taught at home, it is unacceptable.

It is time to take your children and their education back from those who are running their own agenda.