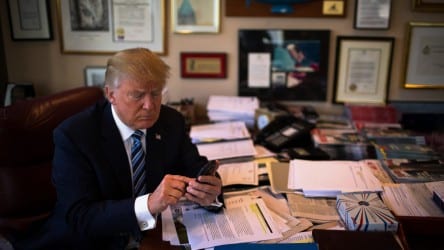 HIAWASSEE, Ga. – Many Towns County citizens are aware of the existence of the CodeRed alert system, designed to warn citizens in the event of a local emergency, but others may be unaware that a national notification program is in place.

The Federal Emergency Management Agency (FEMA) announced that a text alert will be sent to celluar phones, nationwide, in order to test the efficency of the system. The mass message is scheduled to be delivered on Thursday, Sept. 20, at 2:18 p.m. The message will state that the text is a “Presidential Alert”, with phones blasting a jarring tone with unique vibrations.

Although the federal emergency alert system was adopted in 2012, this will be the first time it will serve under the direction of a president. Since the program’s inception, the service has transmitted over 36,000 messagess, ranging from Amber Alerts to extreme weather warnings.

The test will clarify that it is just that – a test – and no response is necessary. The alert strives to ensure that the notification system will operate correctly in the event of a national emergency.

Cellphone users are permitted to opt-out of Thursday’s test.

According to FEMA, the message will read, “THIS IS A TEST of the National Emergency Alert System. This system was developed by broadcast and cable operators in voluntary cooperation with the Federal Emergency Management Agency, the Federal Communications Commission, and local authorities to keep you informed in the event of an emergency. If this had been an actual emergency, an official message would have followed the tone alert you heard at the start of this message. A similar wireless emergency alert test has been sent to all cell phones nationwide. Some cell phones will received the alert; others will not. No action is required.”

The wireless emergency alert system “shall not be used to transmit a message that does not relate to a natural disaster, act of terrorism, other man-made disaster, or threat to public safety,” according to regulations authorized by Congress.

In the event of a major weather event, the test will be postponed until Wednesday, Oct. 3, 2018.