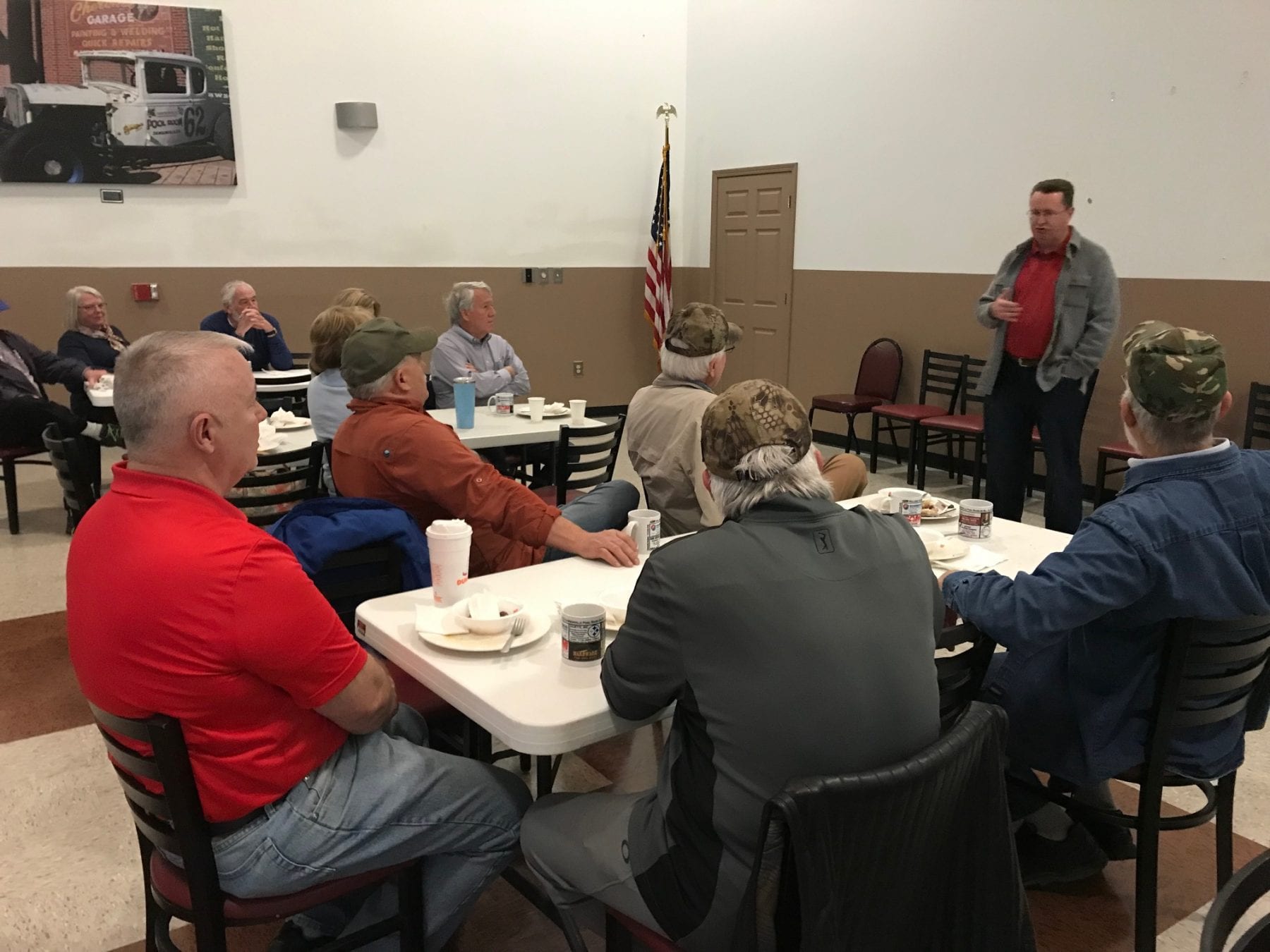 DAWSONVILLE, Ga. – Voting machines, Georgia’s mental health system and transportation issues were very much on the mind Rep. Kevin Tanner (R-Dawsonville) when he spoke at a breakfast meeting with constituents Saturday at the Georgia Racing Hall of Fame (GRHOF).

Tanner holds these meetings throughout the 40 days the Georgia General Assembly is in session, alternating between the Wagon Wheel restaurant in Dahlonega and GRHOF.

The House voted 101-72, mostly along party lines last week, to replace the state’s old voting machines with new ones that print paper ballots at a cost of $150 million. The new machines, Tanner explained, use touchscreens, printers and optical scanners. Voters can select a candidate on the touchscreen, print the ballot out to review, correct any error, then insert the ballot into a separate scanner for tabulation.

“Probably the most controversial issue from a partisan view that we have taken up this session is the voting machine bill,” he said. “There has been a lot of talk by everyone on changing how our voting machines work.”

“I can tell you that everyone in elected office in Atlanta has felt a whole lot of pressure from their constituents to make a change in the voting process – Democrats and Republicans.”

Tanner also has been concerned about Georgia’s mental health issue for some time. Last week, he introduced a bill to create the Mental Health Reform and Innovation Commission.

“There has been a lot of excitement about this. I have had visits this week from several mental health court judges. The advocacy community is very excited about this also. It’s very much needed in our state. We need to take a deep dive into our mental health system with a group of experts. What I like about this commission is it will have 21 members, but only four legislators all the others are experts in this area. Hopefully we will be able to get that legislation through committee on Tuesday and voted out Thursday and over to the Senate.”

Tanner, who chairs the House Transportation Committee, has been working to identify ways to remove transportation barriers in the state. To address the issue, he has introduced a bill that would create the Department of Mobility and Innovation which would replace the Georgia Regional Transportation Agency (GRTA).

“Right now we have six separate agencies involved in transportation at the state level. This would streamline that process down to one agency and one commissioner. It can be transformational if we are able to make it happen.”

The bill would provide public transit throughout the state, including some small, rural pockets of the state, especially in south Georgia.

The bill aims to provide a steady source of income by charging some transportation services a 50-cent fee on all rideshare, taxi and limousine trips and a 25-cent fee on shared trips instead of a sales tax, which some companies like Uber and Lyft have not paid anyway and are currently in litigation.

Tanner said both companies are very supportive of the bill replacing a sales tax.

“For one thing,” he said, “if the court finds in the state’s favor, they would be charged at the highest rate. But also, by putting the money into mobility they understand it actually helps their companies.”

The change could generate up to $60 million in new revenue.

Tanner said the money would help pay for a couple of pilot programs. One would use a tax credit to incentivize employers to provide transportation options such as a vanpool for employees who lack reliable transportation. The other would offer direct aid to unemployed residents in middle and south Georgia who need a way to get to work.

Thursday is Crossover Day — the 28th day of the 40-day legislative session is the last day for bills to move from one chamber to the other — and still have a clear path to becoming law this year. It’s created by a Senate rule.