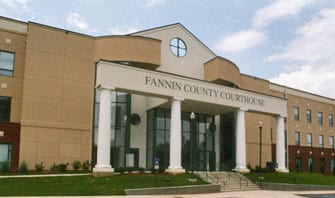 BLUE RIDGE, Ga. – The Fannin County Board of Assessors (BOA) discussed the department’s proposed 2018 budget one last time at their regular meeting Tuesday, Dec. 12, ahead of the final adoption of the entire county budget later that evening during the Board of Commissioners (BOC) meeting.

At a Nov. 29 called meeting of the assessors, the assessors agreed to speak individually with BOC Chairman Stan Helton and post commissioners Earl Johnson and Larry Joe Sosebee about potential cuts by the BOC to the assessors requested 2018 budget.

Chief Appraiser Dawn Cochran reported to the Board of Assessors Tuesday those meetings did take place since the Nov. 29 called meeting and that she had a chance to explain her concerns to the BOC.

“Both post commissioners were willing to review these line items (of the budget) with myself, and after both meetings, the post commissioners stated that they would get with (County Finance Director) Robin Gazaway and go from there,” Cochran told the assessors.

Cochran further explained she along with Board of Assessors Chairman Lane Bishop met with Helton and Gazaway about the proposed budget again Dec. 11.

“That meeting resulted in Mr. Helton stating that his position was to leave the budget just as was recommended (by the BOC) and that if the Board of Assessors run into any issues with their budget in 2018 that they can come back to the Board of Commissioners at that time and revisit the budget needs,” Cochran continued.

As in the Nov. 29 assessors meeting, Bishop again brought up the need for an additional vehicle to be added to the assessors fleet and the additional 10,000 parcels yet to be assessed by the department across the county. The assessors requested $40,000 in capital outlay for 2018, $22,000 of which was hoped to be used to purchase another vehicle. The commissioners recommended amount for this line item was $15,000.

“We are being unfair to the rest of the taxpayers of Fannin County that have gone through these appeals and that we’ve gone out to visit … This other 10,000 – they’re going to (be appraised). We’re going to do it,” Bishop stated.

To this, Cochran agreed that assessing the remaining 10,000 parcels would not only add to the county tax digest but also provide uniform treatment to all county taxpayers.

Assessor Anthony Holloway inquired about the cut in capital outlay and the $21,000 cut in education to the department from the requested amount and asked, “So, the cuts that they (BOC) have proposed … how do you deal with that?”

“Right now, I don’t know how we’re going to handle it,” Cochran replied.

After this, Bishop stated he was told by the BOC to “make do with you’ve got. That’s exactly what we were told … That’s sort of a flippant kind of answer.”

Also, during the assessors meeting, Cochran presented a draft of the department’s revised locked gate/access denied policy for approval by the Board, but after Bishop inquired whether the draft had been forwarded to County Attorney Lynn Doss for review, Cochran explained the policy was not yet given to Doss. The Board then tabled the approval of the policy so as to give Doss a chance to review it and decided to revisit the policy again afterwards.

The draft of the proposed policy contains four steps. Once approved, upon first visit to a parcel, a door knocker complete with date, appraiser and reason for the visit would be hung at the gate of the parcel. After that, a phone call to the legal owner of the property would be made, if possible. If no contact can be made at that point, a certified letter would be mailed to the property owner again requesting access. Finally, if the department still does not receive a response, the assessors would utilize any information, such as aerial photography, building and/or septic permits and real estate ads and/or listings, to estimate a value for all structures on the property.

The Board also approved the 2017 pre-bill digest for mobile homes and approved that digest’s upload to Harris Govern, the computer software vendor of the Fannin County Tax Commissioners office. According the information presented by Cochran to the assessors, the total count of mobile homes in Fannin is 1,193 for a total fair market value of $13,346,429.

Approval of upload and mailing of the 2018 personal property reporting forms was given by the assessors. Cochran explained the reporting forms are sent out to business owners or owners of boats or airplanes at the end of each year, and that these taxpayers are responsible for returning the forms to the assessors office. According to Cochran, the assessors office utilizes an independent vendor to print and mail out the forms to taxpayers, and the cost of using the vendor will be $2,996 for 2018, which is the same amount as in 2017.

BOA Chairman Bishop also addressed the recent public hearing on the potential school tax exemption for seniors held Nov. 16 in the jury assembly room of the Fannin County Courthouse, at which Georgia Speaker of the House David Ralston and state Senator Steve Gooch heard from opponents and supporters of the potential exemption. Bishop explained there were already three types of tax breaks in place for senior taxpayers based on age and income qualifications of which he feared taxpayers are unaware. The chairman directed Cochran to draft a press release to give to the media detailing the three avenues of tax relief already available to seniors.

The assessors approved a number of invoices, one of which was $1,739.97 for the purchase orders of three new iPad Pros. Cochran stated one of the new iPads would be added to the department’s inventory while the other two would replace existing iPads. Also, protective cases for the iPads were purchased for $292. Additionally, approval was made for the final payment of $13,297.50 for 2017 to Data Cloud for technical and maintenance support for the handheld iPads used by field appraisers.

The department also approved an expenditure of $9,271.50 for upgrades to the Data Cloud system, advanced mapping and six new laser distance measurers. The Leica Disto E7500i 650-foot laser measurers, Cochran said, would be an upgrade for the department from the traditional 200-foot tape measures currently be used by field appraisers. The expenditure will come from the 2017 tax assessors capital outlay fund.

Born in Merrillville, Indiana, raised in Cleveland, Tennessee, and currently resides in Copperhill, Tennessee. Graduated from Bradley Central High School in 1996 and attended the University of Tennessee at Chattanooga, eventually earning a B.A. and M.A. in English. Hobbies include hiking, camping and fly-fishing. Interests include baseball, hockey and cliff jumping.