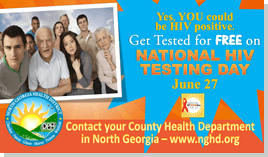 North GA – Why should you get an HIV test?

Because, according to the Centers for Disease Control and Prevention (CDC), about one in seven people in the United States are HIV positive and they don’t know it. If you are age 13 to 64, you should get tested for HIV at least once. *People at higher risk should get tested more often.

National HIV Testing Day on Wednesday, June 27th is your opportunity in North Georgia to get HIV tested for FREE at your local public health department in Cherokee, Fannin, Gilmer, Murray, Pickens and Whitfield Counties or at The Living Bridge Center in Dalton. Just go to www.nghd.org to find your health department or The Living Bridge Center hours of operation, phone number and location, or call the North Georgia Health District at (706) 529-5757.

Our HIV testing is fast, safe and confidential.

National HIV Testing Day is an annual occasion to encourage people to get an HIV test. CDC recommends that everyone between the ages of 13 and 64 get tested for HIV at least once as part of routine health care. *People with certain risk factors should get tested more often. People who test HIV positive can take medicines to stay healthy and greatly reduce their chance of transmitting the virus. People who test negative can continue to take steps to prevent HIV infection, such as always using a condom during sex.