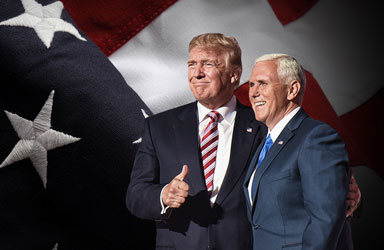 “We have assembled an all-star team dedicated to keeping Georgia in the Republican win column. We are committed to taking Mr. Trump’s message to all Georgians, and turning the enthusiasm of this grassroots movement into votes to win in November,” said Brandon Phillips, Mr. Trump’s Georgia State Director, in announcing the senior members of the Georgia campaign team.

“Georgia voters understand that Hillary Clinton represents a third Obama term while the Trump-Pence campaign of tougher law enforcement, stopping illegal immigration and bringing back jobs is resonating strongly across the state. Voters are tired of the same old Washington corruption and back room deals and will vote for change in November,” said Phillips.

Jennifer Hazelton will serve as Communications Director for the Trump Pence 2016 campaign in Georgia. Hazelton served as an award-winning Communications Director for Rep. Tom Graves (R-GA) in Washington. She also occupied the same role during a 2014 congressional campaign in San Diego, CA. Prior to working in politics, Hazelton worked as a journalist in television news. She started her career at CNN, working up the ranks to producer, executive producer, and programming creator in Atlanta, London, and New York. After her time at CNN, Hazelton worked for Fox News, managing the newsroom in the network’s Washington, DC bureau. Hazelton is also an occasional panelist on WAGA-TV’s “Georgia Gang.” She is a native of Atlanta.

Billy Kirkland will serve as the Senior Advisor for the Trump Pence campaign in Georgia. Kirkland is the founder and principal at PWK Group, LLC.  He launched the firm in 2015 after overseeing the successful election of David Perdue to the U.S. Senate. Prior to the campaign, Kirkland worked as the National Field Director for the Faith & Freedom Coalition. He also worked in former Governor Sonny Perdue’s Intergovernmental Affairs Office. He brings over 15 years of political and campaign experience of all levels to the table. Kirkland is a native of Henry County, Georgia.