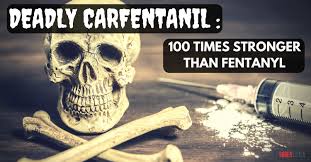 Decatur, GA – Within the past week, the GBI Crime Lab’s drug identification unit received three cases from separate seizures of the synthetic opioid carfentanil. Carfentanil is a fentanyl analog used as a tranquilizer on large animals such as elephants.

It is purported to be 100 times stronger than fentanyl and suspected of playing a role in hundreds of overdoses in the Midwest part of the country this past month. It can be inhaled or absorbed through the skin and very toxic in small quantities. The cases that came in the lab were from the metro Atlanta area and were all suspected to be heroin. As a result of this drug coming into the GBI Crime Lab, lab scientists have enhanced their safety protocols to protect them from the potential dangers.

Some of the changes include wearing a face mask as well as testing any case suspected to contain heroin under a ventilated hood. Officer safety is of grave concern and all officers are strongly encouraged to take extreme caution when handling any suspected opioid.

Carfentanil is not intended for human use and the opioid overdose reversal drug Narcan may be effective but only after multiple doses. The public is urged to be aware of the extreme dangers of handling and consuming carfentanil.