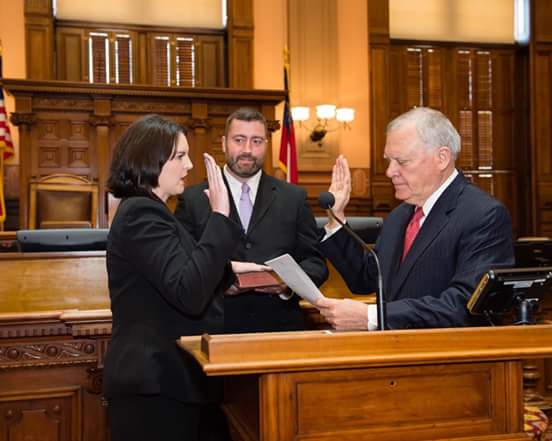 The swearing in ceremony was held December 29th and saw the addition of three new appointments to the Court of Appeals.

Amanda H. Mercier
Mercier currently serves as a superior court judge within the Appalachian Judicial Circuit. She earned a bachelor’s degree from the University of Georgia and a law degree from Syracuse University College of Law. She and her husband, Joseph, have one child and reside in Blue Ridge.
Nels S.D. Peterson
Peterson currently serves as vice chancellor for legal affairs and secretary to the Board of Regents. He previously worked at the Georgia Department of Law and established Georgia’s first Solicitor General Office where he served as solicitor general. He was also the deputy executive counsel and executive counsel for Gov. Sonny Perdue. Peterson earned a bachelor’s degree in Political Science from Kennesaw State University and a law degree from Harvard Law School. He and his wife, Jennifer, have two children and reside in Marietta.
Brian M. Rickman
Rickman currently serves as district attorney of the Mountain Judicial Circuit, where he was previously an assistant district attorney. He is an adjunct professor and serves on the board of trustees at Piedmont College. Rickman earned a bachelor’s degree from Piedmont College and a law degree from the University of Georgia School of Law. He and his wife, Maggie, have two children and reside in Tiger.
david ralston Georgia Governor Nathan Deal