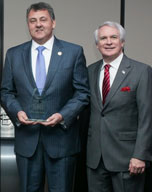 ATLANTA (January 19, 2017)  |  Sen. Steve Gooch (R– Dahlonega) was named as a ‘2016 Legislator of the Year’ by InsiderAdvantage and James Magazine during their “2016 Influential Georgians” reception on Wednesday.

“It is my distinct privilege to have the opportunity to serve my community and the state under the Gold Dome,” said Sen. Gooch. “It means a great deal to me to have been chosen as Legislator of the Year for 2016. My time in the Senate would not be possible without the support of my constituents so I share this award with them.”

“InsiderAdvantage and James Magazine were honored to name Senator   Steve Gooch as one of our ‘2016 Legislators of the Year’,” said Patrick Hickey, InsiderAdvantage Director of Operations. “His meteoric rise up the Senate ranks and his work on transportation, a key issue facing Georgians, have earned him a spot as one of the most influential legislators in the state.”

Please click here for the official release from InsiderAdvantage.