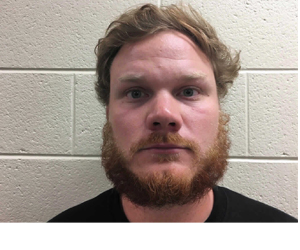 Mr. Daniel Culbreth, a math teacher at Pickens High School, was arrested on Thursday night (October 6, 2016) for Computer Exploitation of Children and Sexual Assault by Persons with Supervisory Authority.  Culbreth, also a PCHS running back coach was arrested for DUI of alcohol in 2015. (see arrest/booking report below).  The arrest came during an investigation into inappropriate communications with a student. Led by Detective Steven Holmes of the Pickens Sheriff’s Office, who also serves as an agent for the Georgia Internet Crimes Against Children Task Force (ICAC) with the Georgia Bureau of Investigation, detectives began following up on a tip that Mr. Culbreth had been using the popular teen social media app Snapchat to communicate with female students. According to the information received by detectives, the content of some of his communication was highly inappropriate. After receiving and verifying this information, Pickens Sheriff’s Office Detectives executed a search warrant on Mr. Culbreth’s Snapchat account and found this information to be true. 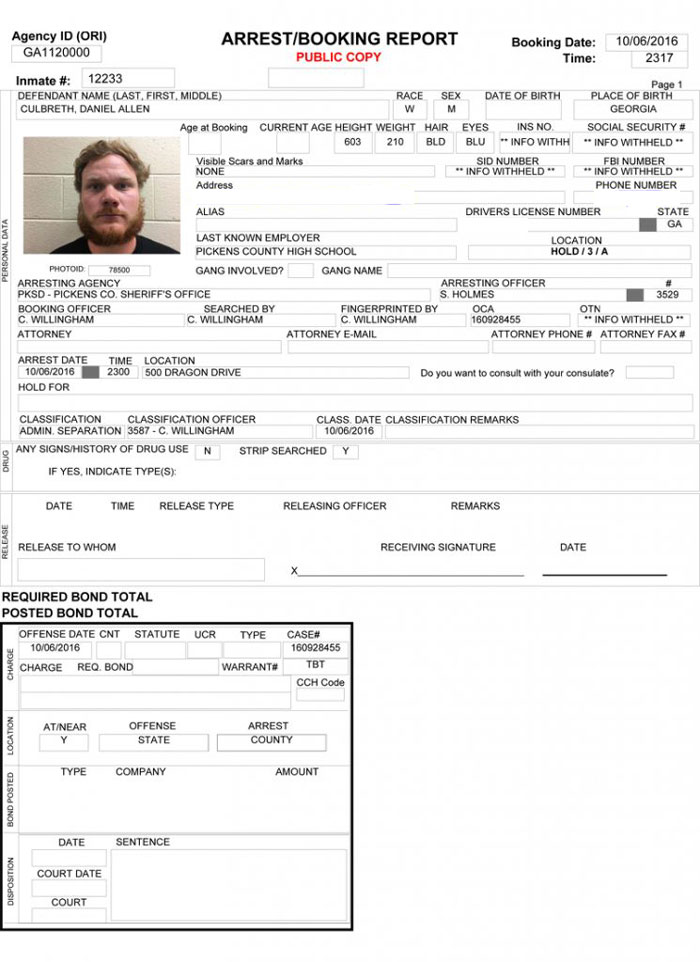 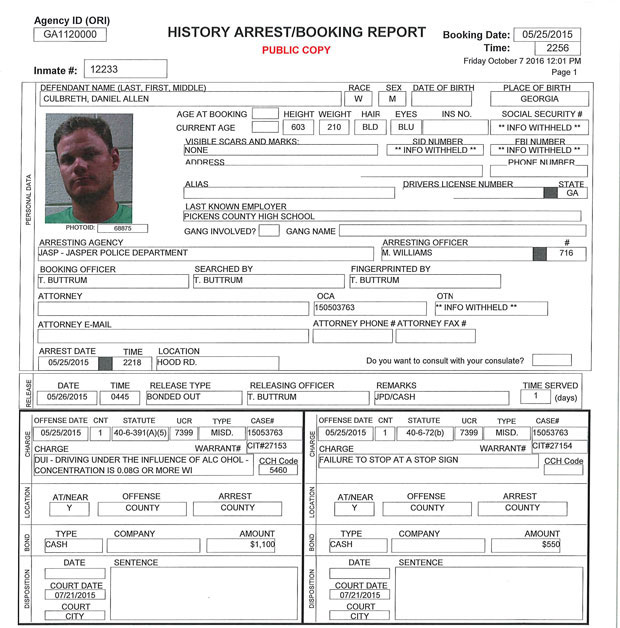 Numerous Pickens High school students were identified in the content of Mr. Culbreth’s Snapchat account. The content indicates that Culbreth had engaged in inappropriate conversations with several students. As a result, search warrants were obtained which led to additional information being gathered. This information together with multiple interviews with students verified Mr. Culbreth had multiple cyber relationships with students and had a physical relationship with at least one student.

Once verified, Mr. Culbreth was arrested without incident and is currently being held at the Pickens County Adult Detention Center. He is awaiting a First Appearance Hearing before a Judge to determine if bond will be set.

Detectives are also examining all evidence, and additional charges may be forthcoming.

Sheriff Donnie Craig stated, “In cases like this, nobody wins.” He went on to explain, “Yes, we may have made a good arrest, but a number of teenage girls have been made victims by someone that we, as parents, have entrusted to care for them.”

The Pickens Sheriff’s Office is urging parents to be very proactive in knowing how their kids are using social media. Detective Steven Holmes urges parents to “know who your kids are talking to and what they are sending over these sites.” If you believe that your child may have been a victim of inappropriate communication with Mr. Daniel Culbreth, you can contact the Criminal Investigation Division of the Pickens Sheriff’s Office at 706-253-8935.

If you would like to learn more about what you can do to prevent your child from becoming a victim of internet crimes, please visit http://www.gaicactaskforcecom.