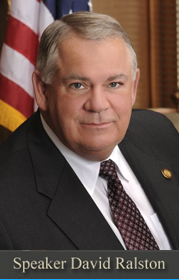 ATLANTA — The Pastor Protection Act (HB 757), sponsored by Representative Kevin Tanner (R-Dawsonville), unanimously passed the House of Representatives today. Announced by Speaker David Ralston (R-Blue Ridge) last summer, representatives from both political parties spoke in favor of the bill prior to the vote.

“The Pastor Protection Act is a simple reaffirmation of our bedrock principle of separation of church and state,” said Representative Tanner. “It makes clear that Georgia respects and honors the sacred oaths taken by our pastors, priests, rabbis and other clergy and that government has no intention of asking them to violate those oaths.”

“This bill addresses real concerns that came from citizens across this state, including many in my district,” said Speaker Ralston. “I thank Representative Tanner for his fine work in seeing this bill through to passage and for doing it the right way – by listening to and working with those who had concerns or suggestions.”

The Pastor Protection Act, modeled on similar legislation in several other states, reaffirms the separation of church and state in Georgia. The bill assures clergy that they will not be required to perform any marriage which violates their faith. It further protects churches, synagogues and other places of worship as well as religious organizations from being required by state or local government to host an event which violates their religious doctrine. Businesses are also protected from any ordinance which might require them to be open on a day of rest (Saturday or Sunday).
With passage in the House of Representatives, the Pastor Protection Act will move to the State Senate for consideration. 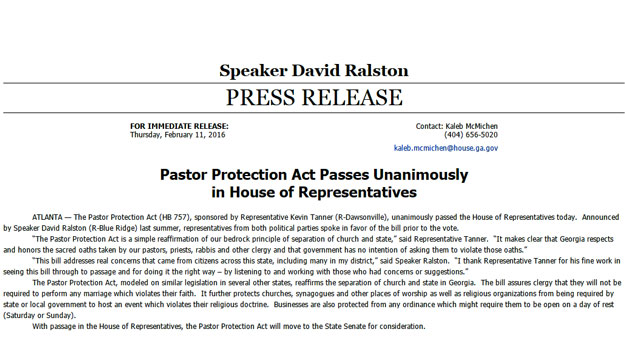