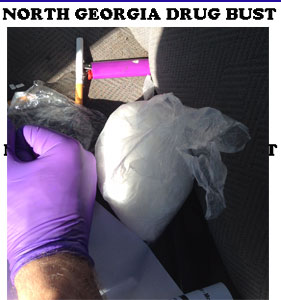 Lavonia, Georgia – On August 14, 2016, Travis Shelton Courtner, 33 years old, was arrested for trafficking in methamphetamine, possession of Xanax (a schedule IV drug), giving false name and date of birth, and two counts of obstructing of a law enforcement officer.

Lavonia Police Department received a call of a suspicious vehicle with Tennessee license plates on the vehicle that had been running for two hours with no one in the vehicle.

The Lavonia Police Officer arrived on scene and observed a prescription pill lying in plain view inside the vehicle.  The officer encountered Courtner in the roadway who provided them with a false name.  As a result, Courtner was arrested for providing a false name and obstruction.

The North Georgia Drug Task Force was called to the scene and initiated an investigation with the Lavonia Police resulting in the seizure of approximately a 1/2 pound of methamphetamine with an estimated street value of $9,000.00.  The investigation is ongoing and additional arrests are possible.