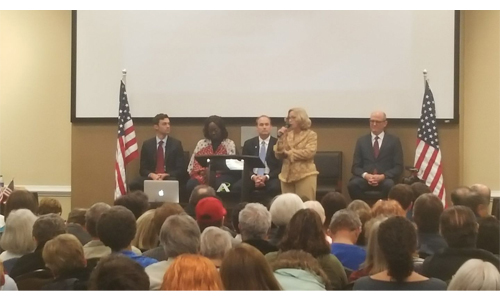 Tom Price’s recent confirmation to be Secretary of Health and Human Services has left his Congressional seat open with an election scheduled to fill it on April 18th.

The election will take place on April 18th and if no one gets 50% of the vote +1, there will be a run off election in June. There are 18 candidates that have qualified for the election, 11 Republicans, 5 Democrats, and 2 Independents.  This district went to Donald Trump by 1.5%.

Sunday, March 12th 2017 “Needles in a Haystack” hosted a democrat forum with focus on 5 democrat candidates in the race:  Ragin Edwards, Richard Keatley, Ron Slotin, Rebecca Quigg, & Jon Ossoff.  The forum was held in Roswell, Georgia with approximately 500 in attendance.  FYNTV.com  televised the event live and will have one on one interviews published soon.  See video below: