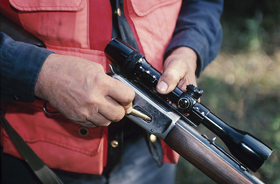 SOCIAL CIRCLE, Ga. (October 13, 2015) ­– The sense of anticipation that comes prior to the opening day of firearms deer hunting season is a feeling that many will have this week.  Beginning on Saturday, Oct. 17 and continuing until Jan. 10, 2016 statewide, hunters will have the chance to hit the woods in pursuit of white-tailed deer.

“There is no better way to manage the deer population than by hunting,” said John W. Bowers, chief of game management for the Wildlife Resources Division. “Deer hunting also provides an economic benefit to the state, with hunters spending millions of dollars every year traveling to hunting locations, purchasing equipment from local retailers, and visiting lodging and dining establishments.”

During the 2014-2015 firearms deer season, over 300,000 hunters harvested more than 400,000 deer in the state. The use of regulated deer hunting ensures that Georgia’s deer population continues to be healthy and strong.

Georgia hunters have access to more than one million acres of public hunting land across the state, including over 100 state-operated wildlife management areas. In addition to traditional hunts, a number of special hunts are offered, including ladies-only and adult/child hunts. Dates and locations for these hunts, as well as WMA maps, can be found in the 2015-2016 Georgia Hunting Seasons and Regulations Guide at www.gohuntgeorgia.com/hunting/regulations.

Hunters are allowed a harvest of up to 10 antlerless deer and no more than two antlered deer (with one of the two antlered deer having a minimum of four points, one inch or longer, on one side of the antlers).  While these are the maximum limits, harvest of female deer should be appropriate for the property hunted.  Information on establishing deer harvest guidelines for your property can be found at www.eregulations.com/georgia/hunting/general-hunting-information.

To pursue deer in Georgia, all hunters must have a valid hunting license, a big game license and a current deer harvest record. If hunting on a WMA, a WMA license is required. Licenses can be purchased online at www.gohuntgeorgia.com/licenses-permits-passes, by phone at 1-800-366-2661 or at a license agent (list of agents available online).

All deer hunters must wear at least 500 square inches of fluorescent orange above the waist to legally hunt during firearms season except on archery-only areas.

Get a preview of what to expect during deer season with a brand, new video.  Go to www.youtube.com/georgiawildlife and click on “Georgia Deer Season 2015-2016.”

SOCIAL CIRCLE, Ga. (October 13, 2015) – Hunting is a safe sport with only a small fraction of hunters ever involved in a hunting incident.

However, no matter how well you know the rules, safety is always an important point of review, and with the upcoming Oct. 17 opening of firearms deer season, the Georgia Department of Natural Resources’ Wildlife Resources Division reminds all hunters to review the ‘Four Primary Rules of Firearms Safety’ before heading to the woods.

“Handling a firearm is a responsibility and all who do should take the time to review safety precautions,” said Walter Lane, hunter development program manager with the Wildlife Resources Division. “This includes respecting all firearms safety rules, being 110 percent certain in identifying a target and awareness of what is in front of and beyond that target.”

During the most recent hunting season, Georgia reported 33 hunting incidents, 15 of which involved firearms.

The following checklist, comprised of only four items, is covered in all hunter education courses and easily can be remembered with the acronym ACTT:

CONSERVATION EFFORTS SUCCESSFUL THANKS TO HUNTERS AND ANGLERS

SOCIAL CIRCLE, Ga. (Oct. 13, 2015) –Every time a hunter or angler purchases a sporting license, or buys hunting and fishing equipment or related items, they are participating in a subtle, yet successful conservation program that has been at work for more than 75 years.

“The Wildlife and Sport Fish Restoration Program benefits all wildlife species, protects and restores habitat and helps improve wildlife management through research,” says Dan Forster, Director of the Wildlife Resources Division. “Through this program, America’s hunters and anglers represent by far the most substantial source of funding for wildlife management in the United States.”

The program works by placing a federal excise tax on sporting equipment like guns, ammunition and fishing equipment. Based on a formula that includes such factors as the number of paid sporting licenses sold yearly, a portion of the funds created by this excise tax is available to the Georgia Department of Natural Resources to be used for conservation and restoration efforts.

In other words, every time a hunter or angler purchases a sporting license or related equipment, they are helping fund the sport they love in the state that they call home.

The WRD uses Wildlife and Sport Fish Restoration funds in a number of ways: