Pastor Bill Honaker introduced Mayor Conley and briefly described his career in Blairsville government. Conley was elected to the Blairsville City Council (Council) in 1995 and served on the Council from 1996 to 2001. He was reelected to the Council in 2003, and then elected Mayor in 2005 where he continues to serve to this day. Conley is a native of Blairsville.

Conley’s first words were: “I stand before you today a sinner saved by Grace.” Conley said he was saved when he was 11 years old; then he went on to describe his struggle as a young man with alcoholism and his victory over the disease. Conley said he ended up at the Georgia Mental Health Institute in Atlanta for two weeks in 1985 because they had a program for alcoholics. He said when his son came to get him, he didn’t want to leave; he didn’t want to face the world outside, and only by his Christian Faith and the support of Alcoholics Anonymous (AA) was he able to overcome this monster of life’s obstacles. He said he asked the Lord to help  him not to drink, one day at a time; and since Oct. 12, 1985 he has been sober. Conley praised the AA Program and Narcotics Anonymous. However, he said, it only works if you work it. Conley said his Christian Faith, his asking God to come to his life, his rebirth, is what gave him the strength to work the program and stay the course.

Conley said he has opened Blairsville City Hall up to Awake America, a prayer group that prays for America on the first Thursday of every month at 11:59 a.m. He said it started out to be in the parking lot, but because of a rainstorm at the first event, they have prayed inside ever since.  He said everyone is welcome. When asked whether it was legally permissible to allow such an event, he said he didn’t know, but will continue to do it no matter the consequences.

In conclusion, Conley thanked Joshua’s Warriors for inviting him to speak and praised the group for their efforts to reintroduce Biblical Principles into American culture.

Joshua’s Warriors is a Christ centered men’s group whose mission is to restore, preserve and protect the God given rights and freedoms endowed in the Declaration of Independence and Bill of Rights. Web address: http://www.joshuaswarriors.com/. 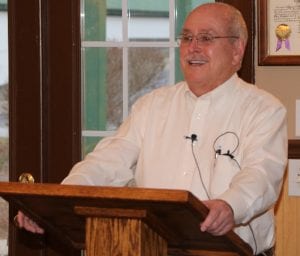 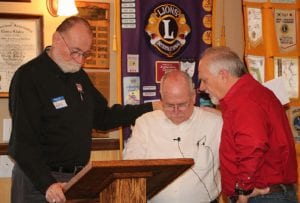