Mark Thomason, the publisher of the Fannin Focus has been in the news a lot lately. This is an unrelated story to Thomason’s arrest, “Journalist Jailed”. It does, however go with the big picture of Thomason’s publication the Fannin Focus, “Intent on Integrity”. Read the story and you decide.

FYN has a copy of every Fannin Focus issue since primary election qualifying. We have reviewed each page for all campaign advertising. We also have a copy of the Fannin Focus advertising rate sheet. We have cross referenced the ads with the rate sheet. We have all the documents to support this article. FYN files the following report on three Fannin County Sheriff Republican Party Candidates, Johnny Scearce, Jack Taylor and Larry Bennett.

“A coalition or cooperative arrangement between political parties intended to promote a mutual interest”. Did this happen in the Fannin County Sheriff’s race?

Remember the marquee at the Swan Drive-In, “Vote Jack Taylor for Sheriff”? What did Taylor pay Steve Setser, the owner of the Drive-In, for the advertising? Taylor listed Setser on his Campaign Contribution Disclosure, but in the space where a candidate has to give the amount of the contribution, Taylor wrote “Setser“ but would not give a price or “no charge” (You can legally donate goods or services to a candidate {In-Kind} but the candidate must describe the donation and place a value on their campaign disclosure). In-Kind contribution values must comply with campaign finance laws. Setser is required to place a value on his contribution. Steve Setser also donated $463 for T-Shirts and $300 for flyers to the Taylor campaign. 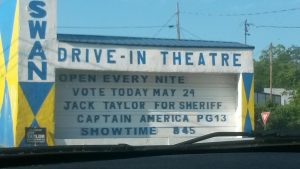 Now, that brings us to Johnny Scearce. Scearce is currently the Blue Ridge City Police Chief. Scearce has run for Fannin County Sheriff several times and is used to filling out a “Campaign Contribution Disclosure Report”. One would assume that Scearce would understand he has to list everyone who contributes to his campaign and show all outlets where he has spent money.  According to Scearce’s Campaign Contribution Disclosure Report filed on 6/30, he showed $0 left in his campaign account. 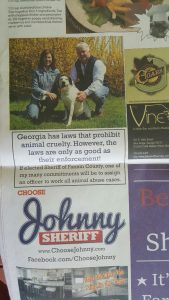 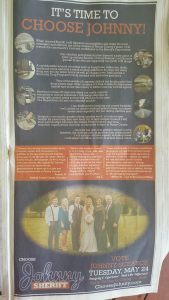 Let’s just suppose Goss used some of the money to place ads in the Fannin Focus…it still would have to be disclosed! Scearce disclosed that he spent money directly three times with The News Observer and once with WPPI – FM so why wouldn’t he disclose any money paid to the Fannin Focus or place the ad directly himself?

There is no disclosure on who paid for the ads. We could not find one Johnny Scearce or Larry Bennett ad in the Fannin Focus that discloses “Paid for By.” One could understand if the publisher missed one ad but it seems he missed them all! Why not show who is paying for the campaign ads, it’s a campaign finance rule?

Sheriff Dane Kirby spent $0 with the Fannin Focus and placed no ads in its paper.

Some questions…Did Mark Thomason extend $13,460.30 of free advertising to three Fannin County Sheriff candidates? Why just the Sheriff candidates? Could they have been in cahoots (colluding or conspiring together secretly)? Wonder how the other candidates who paid for their ads must feel? Wonder what the Georgia Government Transparency and Campaign Finance Commission will think?