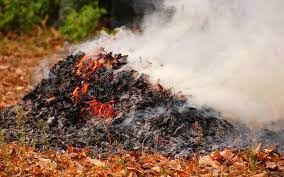 WHITE COUNTY, Ga. – White County Fire Services responded to a woods fire at 144 May Apple  Drive in a remote area of White County Sunday that also involved three campers under the same roof.

Firefighters from Stations 3 and 7 along with mutual aid from the Helen Fire Department were called at 3:15 p.m. but when theta arrived, the campers were fully involved. A report stated a resident was burning leaves and following burning guidelines when an ember from the leaf pile was blown near the cabins, starting the fire.

It took longer than normal for the fire department to arrive at the scene due to the remote location of the fire.

A temporary pond was created from a nearby stream to draw water to fight the fire.

No injuries were reported.