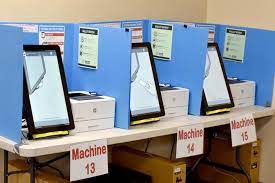 FORSYTH COUNTY, Ga. –For the second time in the last two weeks, Forsyth County residents called on the Board of Commissioners to remove the Dominion voting machines used here and in many, if not all, Georgia counties and replace them with paper ballots..

Speaking during the Public Comments portion of the Board of Commissioners meeting Thursday, Jeff Tormey  said, “Voters have significant concerns about the Dominion voting machines. They are frustrated because they believe their votes do not count.”

He added, “From my perspective, you intend on doing nothing. Nothing only makes the lack of trust  in our system worse. This voting system has vulnerabilities that can be exploited by bad actors.”

He cited an election in DeKalb County earlier this year where, following a headcount, the results were reversed. “The loser was the winner and the winner was the loser. This is a massive problem.”

Frank Schneider has expressed concerns in the past about the voting machines, so he asked, “What have you done?” He then asked, “What can we do to help you?” He recommended County officials conduct a hand count of votes immediately following the close of voting but before certification of the votes. “I do believe that your constituents do not trust the voting process in Forsyth County.”

Before the end of the meeting, County Attorney Ken Jarrard said he would provide the Board with an analysis of what power they possess relative to replacing the machines. He also noted, “This is not the only jurisdiction where requests of that kind have been made.”