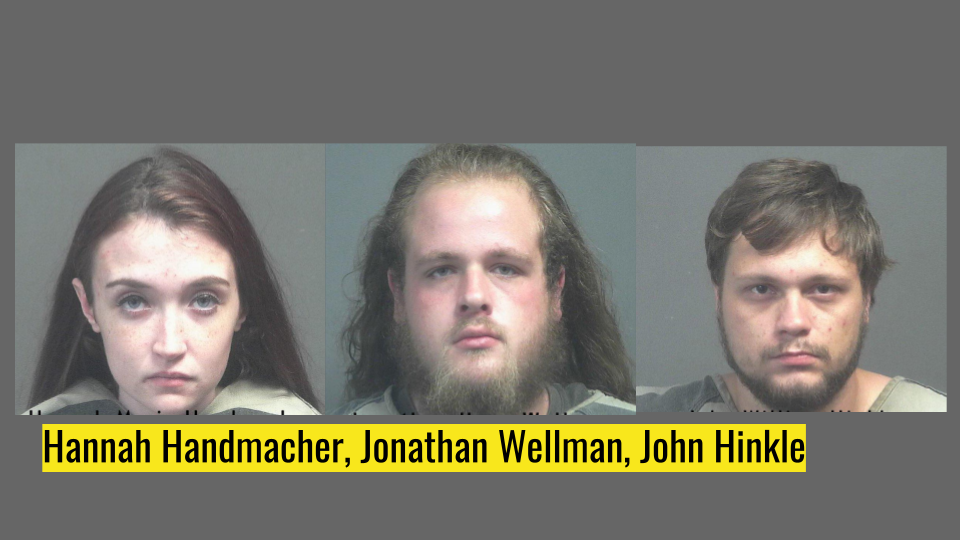 MARYVILLE, TN –   Three arrests were made for catalytic converter theft. Eyewitness claims that suspicion was raised when red sedan was parked at church on Calderwood Drive in Blount County. Dispatchers were called to the scene after midnight on June 8th, 2022.

According to the police report, officers were dispatched to a church parking lot located on Calderwood Highway due to a suspicious red sedan. Upon arrival the red sedan was spotted and nearby a man and woman stood next to a van. A third suspect was under the vehicle. After questioned, one suspect admitted to attempting theft of catalytic converter under van. The man under vehicle attempted to flee the scene as well. Once other officers arrived the three suspects were taken into custody. The tools of burglary were located and taken.

The three suspects are John William Hinkle of Knoxville, Jonathan Hans Wellman of Knoxville, and Hannah Marie Handmacher of Speedwell TN.  All charged with theft of motor vehicle and possession of burglary tools.

The PIO Officer made a brief statement with FYN News,” The theft of converters has gone down in the last two years and the law implemented in 2021 has helped us keep these types of arrests at bay. We want locals to be aware of thefts regardless and we caught this group red handed. The police report on our Facebook Page [linked above] encourages the proper precautions as well.”

According to the witness report, there were concerns of theft the night before by the same suspects. The suspicion was raised when the car stayed overnight once, and the suspects were attempting theft. The witness has been a staff member of the church and decided to stay the next night to keep an eye out. Police were called to the scene immediately upon witness of theft.

Furthermore, the catalytic converter goes on two parts of the vehicle and filters the exhaust system. The part contains many different expensive metals such as platinum.

In Tennessee, it is illegal to sell single catalytic converter parts for money. It registers as a Class A misdemeanor.

In line manner, FYN News has reached out to the Public Information Officer in Blount County for statement above. The Outreach Church has yet to respond.