As many of you reading this probably already know, it’s not uncommon to see a female reporter on your TV screen for sports outlets like ESPN or Fox Sports. Women are branching out into the sports world unlike ever before, with just as much if not more knowledge than their male co-workers.

Unfortunately, despite the strides already made, I believe sexism still exists in the sports world. I think some men find it hard to believe that women are getting into sports because it isn’t “feminine” or a hobby that they should naturally enjoy. These men don’t realize that a woman’s enjoyment of sports often begins with spending time with a loved one. I always like to mention my Papa Skip, and the football knowledge I gained from being around him and spending Saturdays in Athens.

But whatever reason people have for why a woman shouldn’t work in sports, this post is dedicated to those women who haven’t been listening. 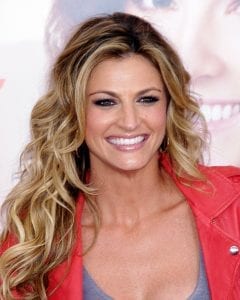 Erin Andrews is one of my all-time favorite sports reporters because she knows her stuff!

I’ve always been a fan of Erin Andrews, mainly because the girl knows her stuff. Although she’s primarily spotted on the sidelines of NFL games, Andrews has covered everything from College GameDay on ESPN to the World Series. Outside of sports she’s had the opportunity to contribute news to Good Morning America and currently co-hosts on Dancing with the Stars. Side note: she also spent some time in nearby Atlanta covering the Braves, Thrashers and Hawks for Turner South. Whenever people think of successful women in the sports arena, Andrews is usually one of the first ones that comes to mind.

Unfortunately her fame from her work as a sportscaster has not made her immune to those who want to tear her down. In 2008 a man filmed her completely nude through a hotel door peep hole and posted the video online. The video went viral, and Andrews sued the man along with the hotel company and several others. Although Andrews eventually won her case, the time period from when the video was filmed until the suit ended lasted eight years. I can only imagine the embarrassment and anxiety that she endured during that time. I admire her strength and perseverance.

As a die-hard Braves fan, another reporter I’ve watched a lot of and enjoy seeing is Kelsey Wingert. I love Wingert’s delivery on camera because it comes across as so natural. While she does typically have a notebook on hand, she does not use a teleprompter to read a script. In other words, she also knows her stuff. 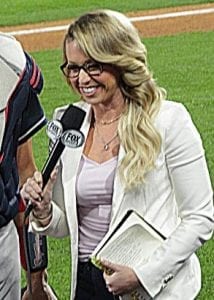 Kelsey Wingert is another admirable reporter because of her on-air delivery and relationship with fans.

I follow Wingert on social media, and another thing I like about her is her constant interaction with fans. There have been numerous times I’ve scrolled through my Twitter feed and seen her respond to a fan asking for a chance to meet her during a game. It’s always met with a yes, as soon as the Braves are finished batting.

I could talk all day about female athletes who have also made waves in sports. On Tuesday, the United States women’s national soccer team defeated Thailand 13-0 in the first game of the world cup. Of course we all know the controversy in recent years about the players receiving less pay than their male counterparts.

A fellow reporter told me a story the other day about a young female athlete he once covered who wanted to play baseball in Louisiana. The locals were not having it, and despite all of her hard work throughout the season, she missed out on being able to play one of the biggest games of that year. However, as is the theme for this entire post, she didn’t let that stop her from continuing to work hard. I haven’t mentioned yet that she was also a phenomenal basketball player, and she is Kim Mulkey, head coach of the Baylor women’s basketball team.

The point I’m trying to make here is that there’s no point in trying to hold women back from sports, when we’ve proved time and time again that we know what we’re doing and we can do it really well. I’m sure if you asked each of these women I’ve mentioned if they agree, they would.

I’m thankful for the people along the way, most of them men, that have helped me to see I can do whatever I set my mind to. I’m afraid that sometimes as a society we still judge people based on how they look before we look to see what they can do. Fortunately for me, I have these women who I have already mentioned, and many more who have blazed the trail for me. I believe it’s partially my job to make sure that path continues to stay lit for those after me.