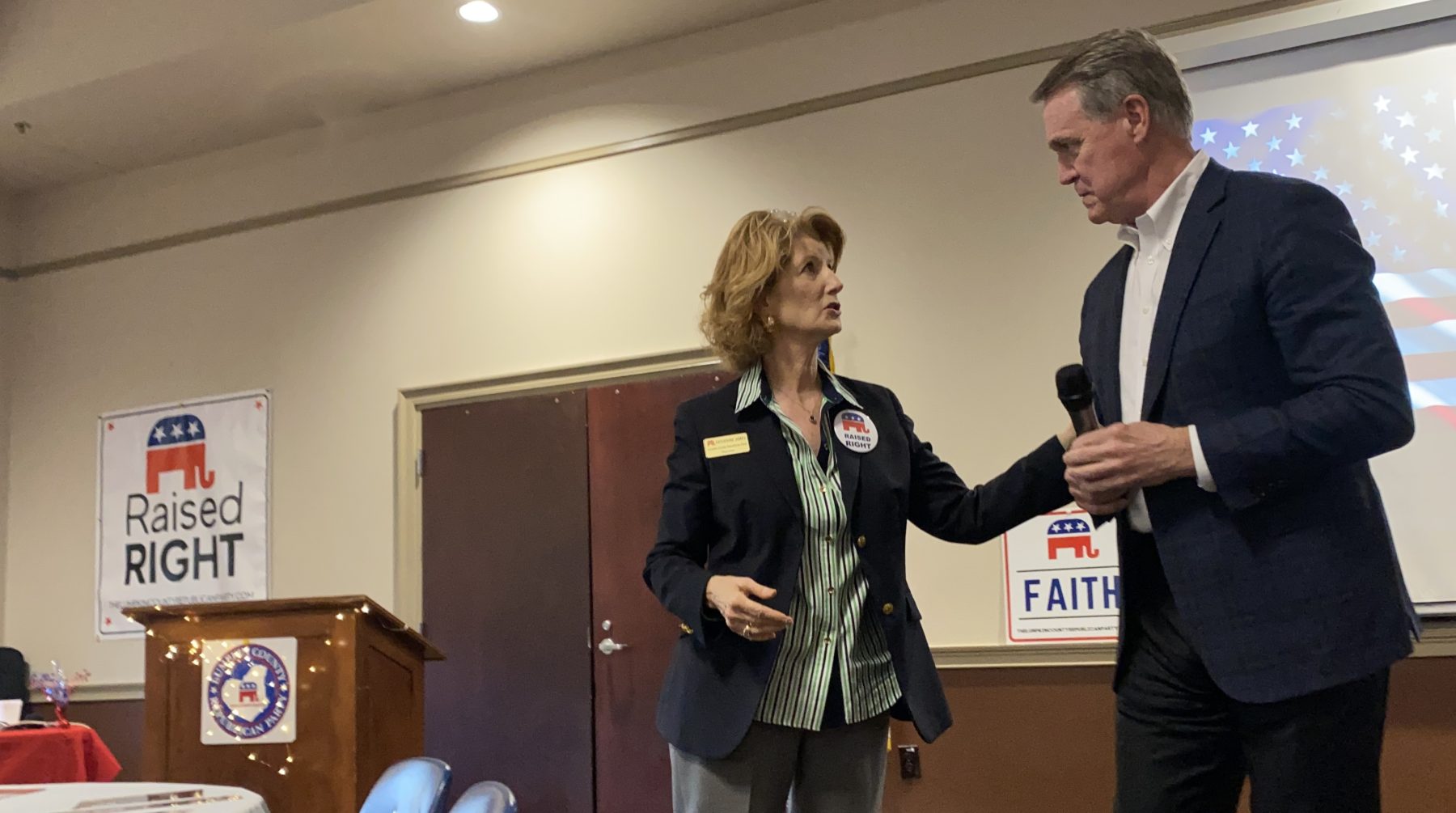 LUMPKIN, Ga. — The Lumpkin County Republican Party hosted an event featuring David Perdue, Gary Black, and J. Gregory Howard as guest speakers. All three speakers took the opportunity to share their campaign platforms with the Lumpkin Republicans, who are preparing for a primary in May. 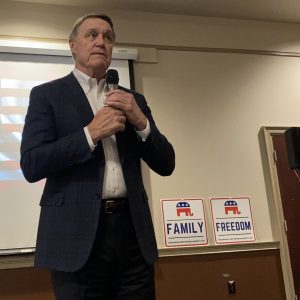 During the 2020 General Election, former Republican Sen. David Perdue failed to reach a plurality of votes in his re-election bid. The resulting run-off led to a election that gained nation-wide attention, leading Democrats to a senate majority. Perdue is now one of five Georgians hoping to become the Republican gubernatorial candidate. He spoke at the Lumpkin County event on Thursday evening, addressing several campaign issues.

“They’re tired. They’re tired of their voice not being heard, they’re tired of being taken advantage, and they’re tired of our Republican leaders, guys, not fighting for us,” Perdue began, “I’m in this race for one reason: I want a Republican conservative in the White House in 2024 to stop this madness.” Perdue emphasized the importance of Georgia’s election outcomes, and said holding off Stacey Abrams, the likely Democrat candidate for governor, is critical to ensuring Republican victories nationwide.

“I don’t have to do this, neither do you. I’m doing this for these kids in the back, and my grandkids, and their grandkids in turn. 13 dead soldiers, runaway inflation, $5 a gallon gasoline, the brink of war, 2 million immigrants, guys that all started right here in Georgia,” Perdue told the audience.

Perdue didn’t shy away from criticizing the incumbent Republican, Gov. Brian Kemp while speaking. He suggested Kemp only delivered on key issues because of Perdue’s support for them, including constitutional carry. “We saw our governor cave in to Stacey Abrams and George Soros within a year, and now we’re reaping the whirlwind in D.C.”

Perdue also claimed that he lost his re-election bid due to an onslaught of illegality, “Yes, it was stolen guys, don’t make any mistake about that.” He shared his desires to ensure election security, one of Perdue’s main campaign issues. “I want an election law enforcement agency solely dedicated to enforcing election law. We have not done that in the state of Georgia.” Along with that, he told the audience he would strengthen election integrity with more audits and by getting rid of voting machines.

In closing, Perdue touched on several other key topics for Republican voters, including his support for the elimination of Georgia’s state income tax, increasing parent involvement in education, and controlling drug and immigration issues. 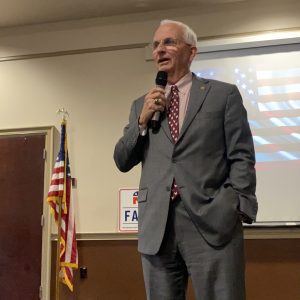 Gary Black, the current Georgia Commissioner of Agriculture, also spoke at the event. Black is one of six names that will be on the Republican primary ballot. The republican candidate will then face Democrat Sen. Raphael Warnock in November. Black’s largest challenger, Herschel Walker, has been endorsed by former President Donald Trump. Black directly called out Walker during the event, emphasizing his own experience and willingness to “show up.”

“Winning this election, restoring Republican leadership in the United States Senate is vital, I believe, to the security of our country, the security of our homes and our families, the security of our economy. I also believe that our security has been compromised ” Black said. He called immigration rates and inflation disastrous problems, blaming President Biden and the Democrats in Congress. Black also called his potential challenger, Warnock, “nothing but a rubber stamp for all their actions ever since the day he took office.”

Black discussed immigration, noting that he had recently returned from a second trip to the U.S. border. “The invasion that we’re facing right now is actually the number one threat to the future of this republic,” Black said before citing recent border apprehensions that number in the 800 thousands. He spoke against the drugs, terror, and debt bondage that he believes are being brought across the border.

Black disparaged the Democrats’ solutions to immigration issues: “They have no solution … I do have a solution. We should build it, we should equip it, and we should staff it. We must finish this wall.” Black also said that he wants Georgia National Guard members home, “163 of them now are serving on the border anywhere from California to Texas. I want them home because I want the federal government to do its job.” Along with further investment in border patrol, Black said he wants to designate Mexican cartels as terrorist organizations and help lead the effort to withhold aid to countries who don’t control immigration at their own borders.

He also touched on the “Biden-Warnock inflation formula,” that Black said is eroding the power of the American economy: “We’re paying more for food, fuel, fertilizer, consumer products, building materials.” Black said his solution is to cut it, cap it, and drill it, referring to his platform that the U.S. Government should cut spending, cap the amount of regulations, and work towards energy independence. Black also said he would lead the effort to restart the Keystone XL Pipeline project.

Black then turned directly to one of his competitors, “Herschel Walker is ignoring the voters … I think it’s a travesty.” He told the audience: “I’ve made tough budget choices. I’ve answered when Georgia has called. I have delivered historic disaster relief in the aftermath of Hurricane Michael. I know our … transportation systems, our budget systems. I have the experience. I have the leadership and the decision making capability to represent you,” drawing a comparison between his own record with Walker’s.

Attendees at the event also heard from J. Gregory Howard, who is running to be a U.S. House Representative for the Ninth Congressional District. Howard largely spoke about his conservative activism and desire to educate Georgia citizens on their rights and how to fight for them.

Howard introduced himself by noting his extensive conservative activism: “I used to do a show that’s called The News and Views with Gregory Howard, and I was the follow up to Sean Hannity on Saturday and Rush Limbaugh on Sunday.” He listed his accomplishments as a leader and member of several political groups, including being recognized by the NRA as the top legislative activist in the country. 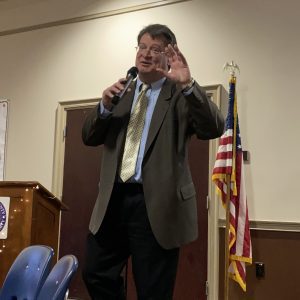 Gregory Howard spoke to the audience about his conservative activism.

Howard’s most recent activism has a heavy influence on his campaign. “One of my other big priorities is how do I help empower you to fix these problems.” He shared his experience with his current fight towards “getting citizen access to the grand jury re-established. That is your right, to redress your grievances with government, and to go to the grand jury and make what’s called a presentment.”

Howard explained that he has had a preliminary meeting with a Georgia grand jury where he and his colleagues “are making two presentments to them. One is for the reestablishment of your right to approach a grand jury without interference from any elected officer or appointed officer.” “The second one,” he said, “is I’m presenting a presentment on behalf of Voter Georgia, and we’re calling them as witnesses, and all were asking is that all the evidence that they have gathered be reviewed by a grand jury.”

“Folks, this is what I do,” Howard closed, referencing his political activism. Stressing the importance of his work, he told the audience “It’s how you can stop the school board from enacting woke policies. It’s how you can change things with the city council, your county commission. And it’s your right to do this, and that’s what I’m running for, is to help empower you.”