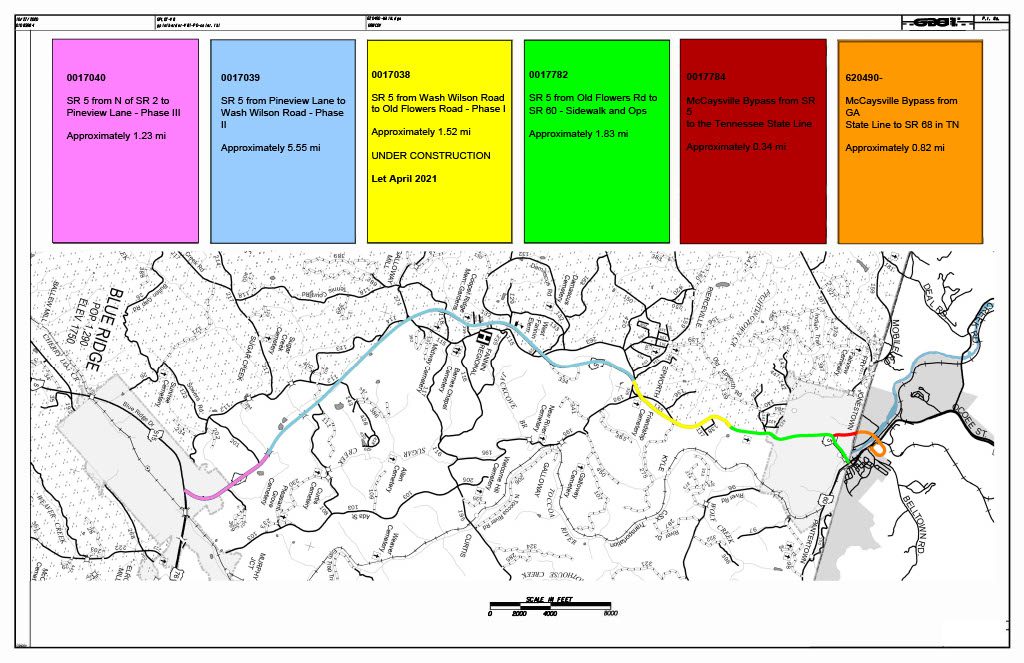 FANNIN, Ga. — The Fannin County Board of Commissioners heard updates on State Route 5 construction projects and approved purchases for the county’s jail and recreation center at their latest meeting

District Engineer Grant Waldrop, along with others involved in the project, spoke to the commissioners about current and future construction along SR 5. The board was presented with a map that detailed the six projects that will take place in the coming years.

District Six Project Manager Sonja Thompson explained “The purpose of the project is to provide improvements between Blue Ridge and McCaysville … to construct a truck alternate route around McCaysville and Copperhill downtown areas … and we are also making operational and maintenance improvements along the state route,” and that the project will widen SR 5 from a two lane road to a four lane road with a center turn lane until Old Flowers Road.

She also noted that the project is divided into six sections, and briefly described what each project section entailed:

Project 0017040, an approximately 1.23 mile stretch of SR 5, will include upgrades to the Progress Circle traffic signal and a designated bike lane.

Thompson noted that Project 0017039 is the largest section of project at approximately 5.55 miles of State Route 5, beginning at Pineview Lane and ending near Wash Wilson Road. She told the board “It’s going to take approximately about two years to acquire [the right of way] because there’s over 200 parcels in this section of roadway,” emphasizing the size of the project section.

Project 0017038, approximately 1.52 miles of SR 5 between Wash Wilson Road and Old Flowers Road, is already under construction. “It’s exciting to come provide this update for the Highway 5 widening project, especially now that we’re actually into a phase where you can start seeing some of that heavy civil construction,” Waldrop told the board. In further conversation, the board was informed that the contractor intends to shift traffic when the project starts.

Thompson said Project 0017782, at a length of approximately 1.83 miles, is commonly referred to as the “side walk roundabout section.” It will include new sidewalks, curbing, a roundabout at School Street, and a signal at West Tennessee Avenue.

Project 0017784 will bypass downtown McCaysville and Copperhill. It will veer off from the School Street roundabout and stop at the state line. On the Tennessee side, Project 620490 will continue and loop into Ocoee Street, said Thompson.

In an email, District 6 Communications Officer Joe Schulman shared the estimated letting dates and costs of each project: “Cost for the projects are updated each year as a minimum, along with any major changes and are estimated using the current design.” Letting for Project 0017040 will begin at the start of 2024 with an estimated approximate cost of $17 million. Project 0017039 letting begins in the summer of 2024 at an estimated cost of $53 million. Letting for Project 0017782 is mid-2022 with a $14 million cost estimation. Project 0017784 and 620490 both have an estimated letting date of mid-2024 but an approximate cost of $5 million and $15 million respectively.

Recreation Director Eddie O’Neal presented the bids for security cameras at the Fannin County Recreation center. The commissioners compared three bids and approved the bid from Mountain Valley Systems LLC. At a total cost of $8,278.25, 15 new cameras will be purchased for the recreation center.

At Sherrif Dane Kirby’s request, the commissioners approved the purchase of dual view X-ray equipment for the Fannin County Jail. The purchase, a total of $165,250, will come from SPLOST Public Safety funds, and will include the installation and calibration of the equipment, operator training, and two years of warranty. In addition, the board considered a potential purchase of an additional three years of warranty at a later date.

The board also approved two appointments during the meeting. Both Angelina Powell and Anita Weaver were unanimously appointed to the Tax Assessors Board and Fannin County Water Authority Board respectively.