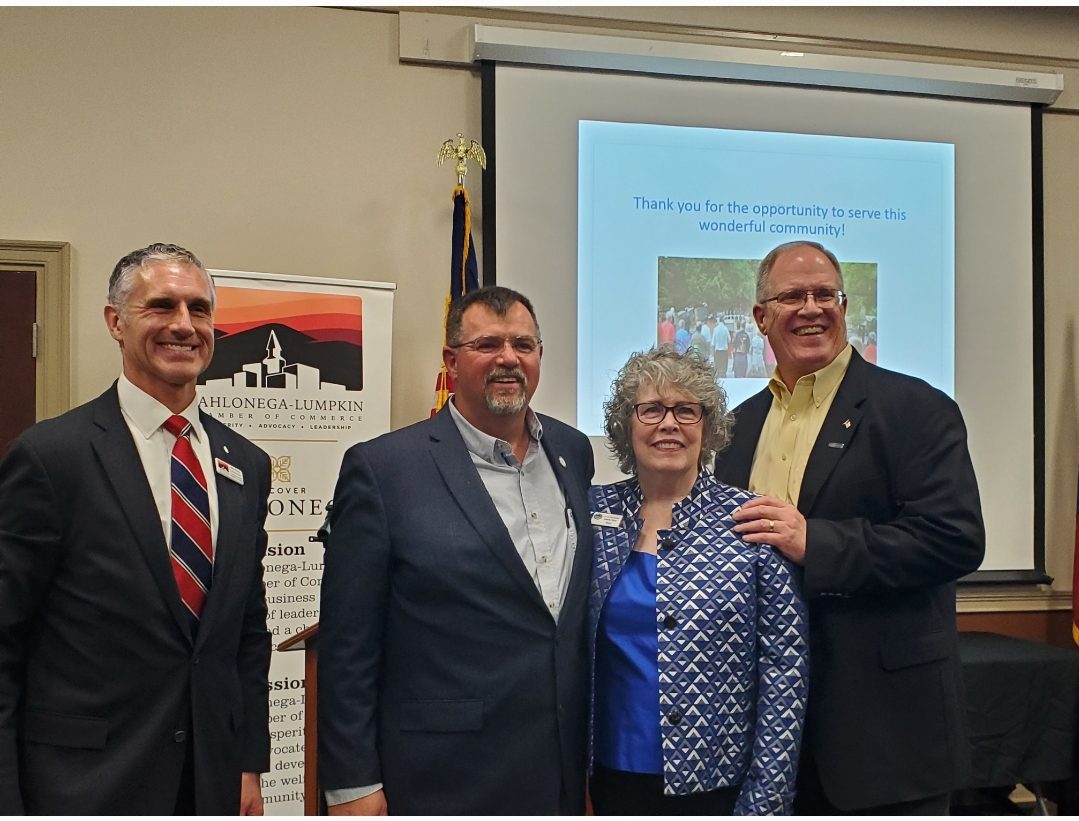 LUMPKIN COUNTY, Ga.- Mayor JoAnne Taylor and Chairman of the Board of Commissioners Chris Dockery were invited by Dahlonega-Lumpkin County Chamber of Commerce to deliver the state of the city and county address at a luncheon on Feb. 17.

At the luncheon, Taylor and Dockery addressed the different budgets that the city and county have for the year. They also discussed the goals and projects for each of the two governments for the year. 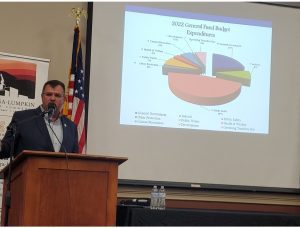 Chairman of the Board of Commissioners Chris Dockery during the State of the County address.

The majority of the expenditures come from public safety and that is 46% of the chart. The next highest expenditure is 21% for general which is for running the government. To view the full budget for FY22 visit https://www.lumpkincounty.gov/DocumentCenter/View/2005/2022-Budget-Handout—As-Adopted-082421?bidId=.

Dockery went on to explain how and why the county went about setting up a TSPLOST tax. This is a one-cent sales tax paid by everyone who shops in the county to help pay to maintain the roads. Due to this tax, the county is able to more effectively get the roads that need it, also during the winter storm recently they were able to respond better and get the roads cleared faster.

Next Dockery discussed the projects the county has been able to fund and complete in the last year. These projects include the new library and the Kelley Building for Planning and Development services. He spoke briefly about the new animal shelter that the board is beginning to look into.

He also provided an update on the aquatic center that has hit a delay due to the increase in price in materials. The project was originally budgeted for 19 million however after the plans were drawn up it came in at 27 million. In light of this increase, the board is attempting to fit the design into the budget, and should this plan fail they will simply go to a rec pool for the time being.

The last item Dockery touched on was the challenges that are being presented by the growth happening to the county. He informed those present of the moratorium that is currently in place as the board reevaluates the land use ordinance. He also invited input from the public on the matter at the next public hearing on Feb. 22 at 6:00 p.m. in the Commissioner’s boardroom.

Taylor started her presentation with a look at how Dahlonega and Lumpkin County have grown since the 2010 census. Dahlonega has grown 43.8% in that time and the county has grown 11.87%.

She then spoke briefly about the budget. Explaining how the expenditures differ from the county. The Public Works is the biggest expenditure for the city. To compare the two budgets visit https://dahlonega.gov/wp-content/uploads/2021/07/FY2022-City-Managers-Recommended-Budget.pdf. 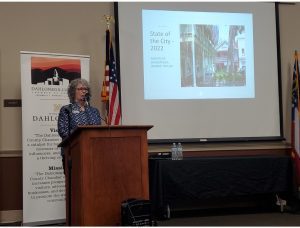 Mayor JoAnne Taylor during the State of the City address.

The next item that Taylor discussed was the 5-year capital improvement program. This is taking the money and focusing on Water and Sewer and the Stormwater improvements needed for the city.

She spoke about the low millage rate the city has been able to maintain. Showing that the city is very financially stable.

Taylor went on to explain some of the city’s assets such as the historical preservation and the tourism partnerships. She also explained the vital importance that volunteerism plays in the event the city holds.

Both leaders thanked everyone for their support. To view the whole luncheon visit http://vcloud.blueframetech.com/broadcast/embed/361857?autoplay=0. Present at the luncheon for the Chamber was Robb Nichols and Chuck Jones.