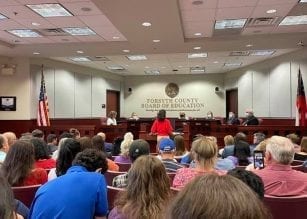 FORSYTH COUNTY, Ga. – Parents of Forsyth County students are “mad as hell and they say they are not going to take it anymore.”

The popular website Concerned Parents of Forsyth County Georgia exploded with negative comments about the Forsyth County Board of Education following the Board’s May meeting.

School officials claim that the school system “does not and will not teach nor promote Critical Race Theory (CRT).” Parents say that statement is deceptive because one component of the schools’ strategic plan, adopted in 2017, is Diversity, Inclusion, and Equity, which a number of education experts have said is another name for CRT.

The school website states the strategic plan was developed “working in partnership with Georgia Leadership Institute for School Improvement (GLISI),” a strong advocate for CRT.

Conservative radio talk show host Erick Erickson says “GLISI has embraced systemic racism as a problem and that “equity” is needed as a cure.  You can say it is not critical theory, but the whole concept is actively derived from critical theory.”

Forsyth County Commissioner Laura Ohnsman Semanson agreed. “A big part of this is semantics,” she posted. Whether or not they are “teaching” CRT if strictly interpreted can be explained away through giving the program a different name, but when the actual programming from the provider (GLISI) is examined (regardless of its name) it is deeply rooted in CRT principles. Further, one could argue it’s not being “taught” because those being instructed in the material are the educators themselves.”

Jenny Clark posted a question: “How much has this “partnership” with the GLISI cost the Forsyth County taxpayers?”

Several posters want to know what the Board is hiding. Mendy Parker Moore posted, “Looks like the teacher training platform is no longer accessible. Of course they’re covering their tracks. Not surprised but it’s very discouraging that they don’t value transparency.”

Again, Commissioner Semanson agreed. “I am not at all surprised. In the past they have failed to produce preliminary maps and related work product related to redistricting (which many believe to be highly political).”

Meg Braskett added, “A few more links I scrolled through that have been posted on here have been scrubbed from the site too…so frustrating and disappointing.”

Some posters like Tamara Bourque Sclafani and Tiffany Hall Donofrio expressed a desire to “vote (Board of Education members) out or have them recalled.”

The anger and resentment parents feel toward the Board of Education does not appear to be going away any time soon.

Danielle Reneman, who spoke at the May meeting, posted, “It’s time to get organized for the next BOE meeting!”

Margie Robinson Carroll encouraged parents to join local school councils which she said are forming now. “You should know who they are and how they will speak for you when at the “round table”.  Seems we are missing a voice at these tables at our individual schools as well! Time to get more involved with your children’s education and future. ”

Fetch Your News is a hyper local news outlet that covers Dawson, Lumpkin, White, Forsyth, Fannin, Gilmer, Pickens, Union, Towns and Murray counties as well as Cherokee County in N.C. FYN attracts 300,000+ page views per month, 3.5 million impressions per month and approximately 15,000 viewers per week on FYNTV.com and up to 60,000 Facebook page reach. If you would like to follow up-to-date local events in any of those counties, please visit us at FetchYourNews.com