Fannin would defeat Union 34-7 to even the All Time Series Record at 15. 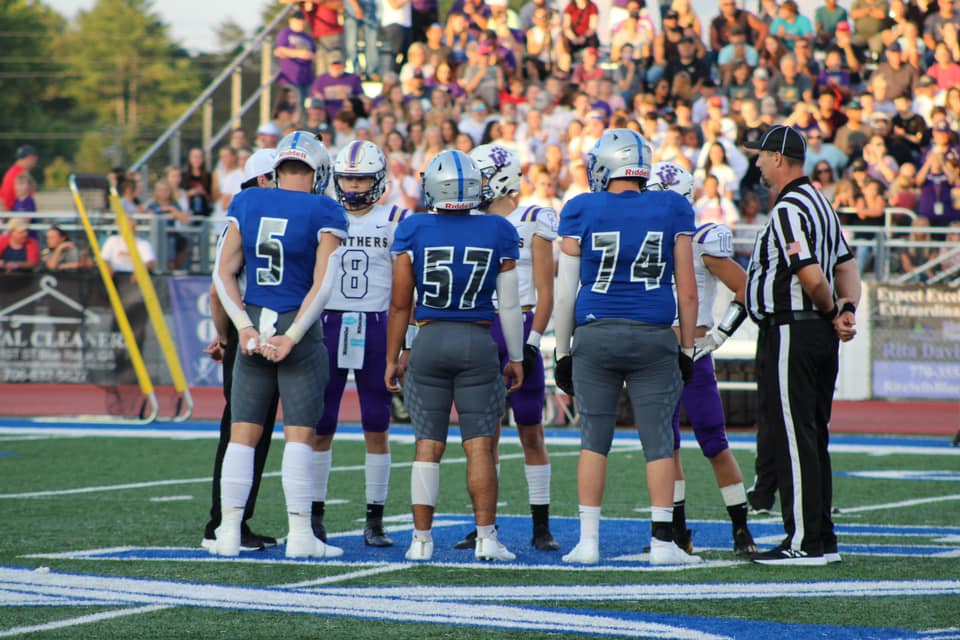 Captains Meetings at Midfield. All Photos by Rachel Adams

The game would not start on time. A lighting delay pushed the start time back 17 minutes to 7:47pm. Fannin County did win the toss and elected to receive.

Fannin would start off with the ball. Seth Reece would get the 1st 3 touches of the games picking up 20 yards. David Mashburn would pick up 10 yards on the ground moving the ball to the Union 32. Mashburn would find Carter Mann for an 18 yard pass for a 1st down that put Fannin County at the Union 14. Union County would come up with a huge stop on 4th down to get the ball on their own 5.

Union County would go 3 and out and punt back to Fannin.  Union’s Wilson Walker would come away with an Interception on Mashburn. Union would get the ball back but were unable to get anything going on offense. Carter Mann would come up with a great tackle on 1st down, Andrew Waldrep and Bryson Fink would come up with the stop on 2nd down, Logan Helcher would try and find a receiver on 3rd down but Carson Collis made a great play in coverage for the Rebels forcing another Union County 3 and out.

Penalties were an issue for Fannin on the following drive. A penalty on the punt return and the 1st play of the drive would put Fannin Starting on their own 30. Stein Harkins for Union County would have 2 back to back stops and Fannin faced 3rd down and 28 from their own 27. Mashburn would throw an incomplete pass forcing a Fannin punt.

Union took over with 2:30 left in the 1st quarter on their own 34. Corbin Davenport made a great play on Keyton Chitwood after a Panther holding penalty. Helcher decided to pick on Davenport again by trying to find Chitwood down the field but the pass was incomplete. Cade Sands, Rico Arellanes and Issac Davis were able to corral Helcher on 3rd down for a stop.

Union would punt the ball and push Fannin back to their own 19. Fannin would have another penalty on 1st down. Seth Reece picked up 19 yards on 2nd down and 1 yard on 3rd down to get the 1st down and that would be the end of the 1st Quarter.

Union played well in the 1st quarter defensively. The Panthers won the field position battle in the quarter. Defensive Coordinator Thomas Nelson done  great with disguising coverage and it took the Rebels a few drives to get adjusted. Too many penalties to start the game off for Fannin. Fannin County would settle down starting in the 2nd Quarter.

Fannin was unable to get anything going on their 1st drive of the 2nd Quarter and were forced to punt back to Union.

Bryson Holloway made a great play in coverage on 1st down. Hayden Lynch, Cade Sands and Rico Arellanes were in on a tackle for loss on 2nd down. Logan Helcher had green turf  in front of him on 3rd down but Cade Sands stayed at home and made a great tackle to force 4th down for Union. 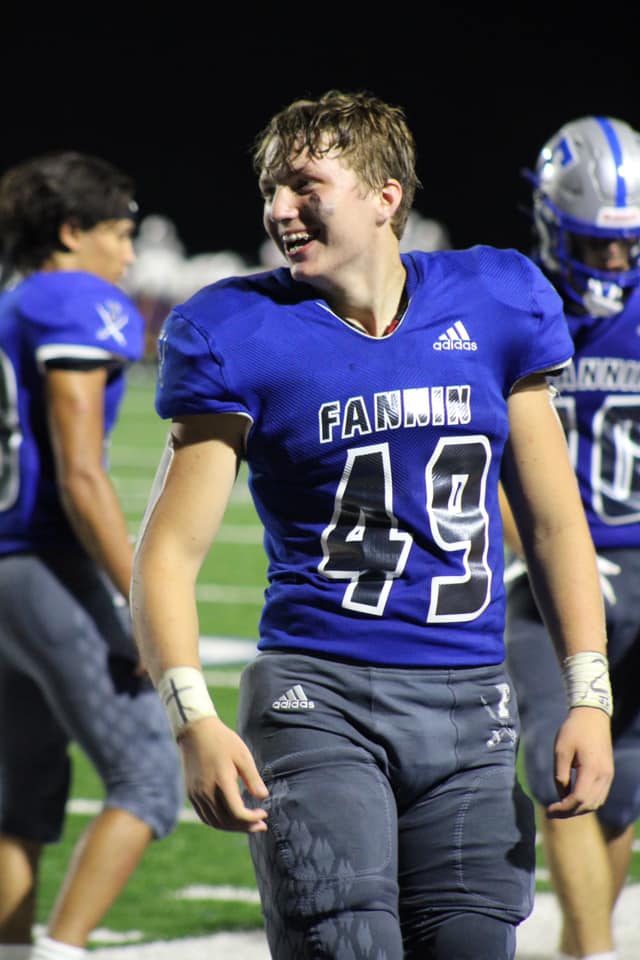 Cade Sands shares a smile on the sidelines

Union would punt back to Fannin. Fannin would start on their own 3. Seth Reece picked up 18 yards on 1st down. David Mashburn sprinted to the end zone for a 78 yard Touchdown run but a block in the back was called that took 6 points off the board. However, Fannin County did not let the penalty on the run stop their momentum.

With 3:39 Left in the 2nd Quarter David Mashburn would find pay dirt. Mashburn made several defenders miss and had a Super Man dive into the end zone. 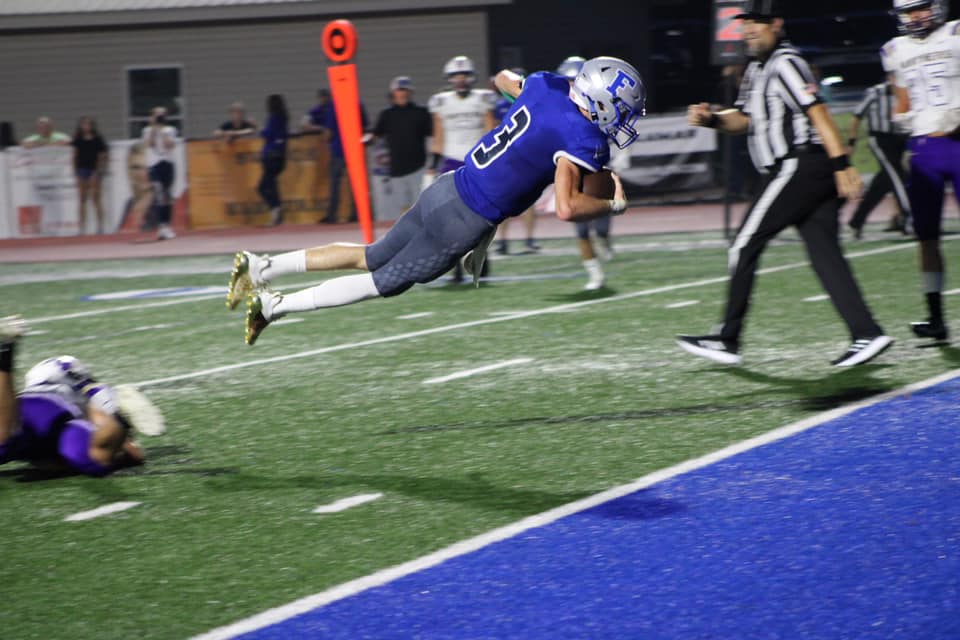 David Mashburn dives into the end zone for a TD

Union would try and get the momentum on their side on the following drive but were unsuccessful. Helcher was trying to find Chitwood on 1st down. Pass was incomplete with Carson Collis in coverage. Andrew Waldrep made the stop on 2nd down. Helcher would pick up a panther 1st down on 3rd down.

Taylor Collis made a great play in the back field to start the next drive. With 2:22 left in the 2nd quarter, Helcher found a receiver down the sideline. The Panthers cut it up field and Carson Collis done a great job of putting his helmet on the football to force a fumble. Andrew Waldrep recovered the fumble on Fannin County’s own 45. 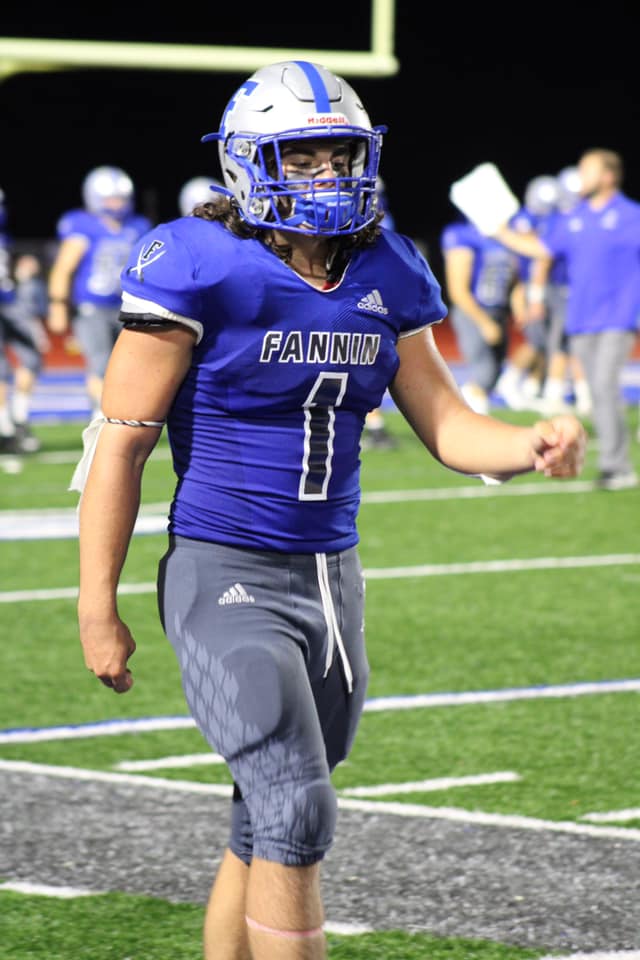 Andrew Waldrep #1 had 9 tackles vs Union

1:53 left in the 2nd quarter David Mashburn would find Bryson Holloway for a 45 yard TD Pass. Holloway hauled in a 10 yard reception on the previous play. This extended Fannin’s lead to 14-0. Fannin would take the 14-0 lead to the locker room into halftime. 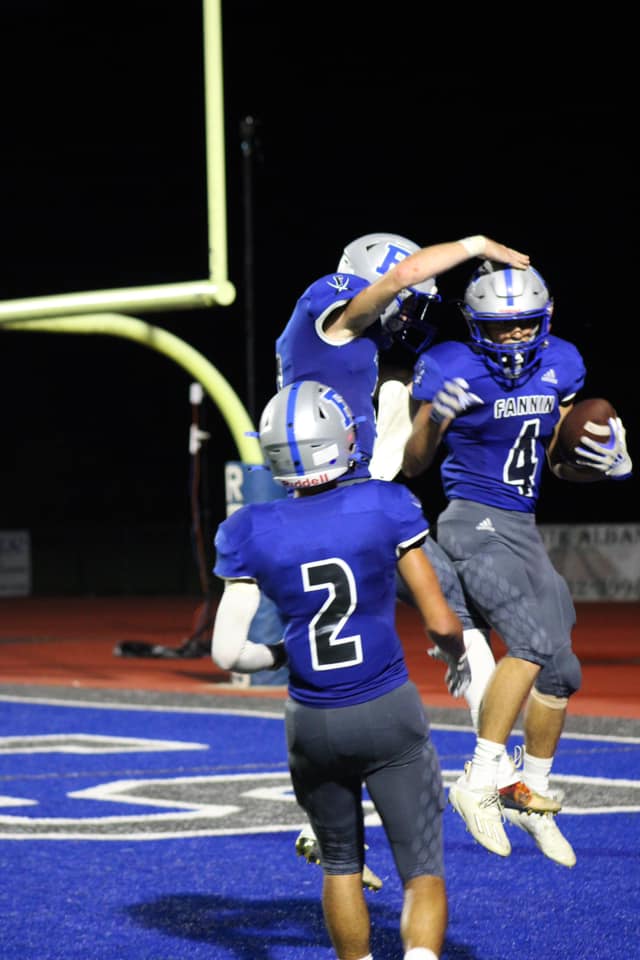 Union would start with the football to open up the 3rd quarter. On the drive, Nate Maloof and Rico Arellanes would both come inches away from getting a sack.  Fannin’s Cason Owensby, Sawyer Moreland, Cade Sands, Corbin Davenport would come away with tackles.

Logan Long would force a fumble and Corbin Davenport would recover and Fannin would take over on their own 45 with 8:43 left in the quarter. 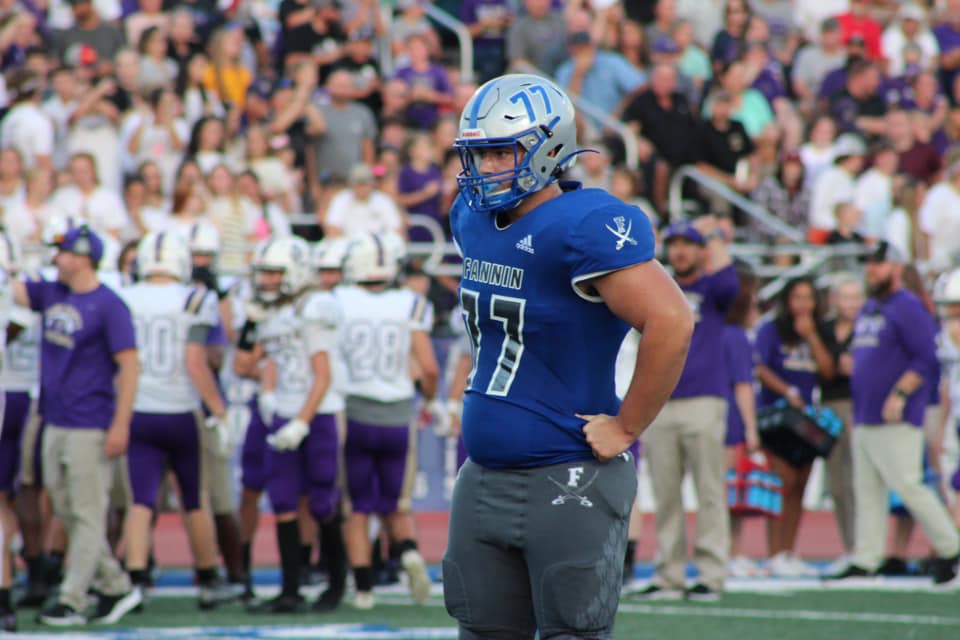 Logan Long after a tackle. Long played both ways Friday night at RT and DT

David Mashburn would find Sawyer Moreland 2 times on the following drive. A 13 yard reception and a 9 yard reception. Seth Reece would later punch it in the end zone with 5:33 left in the quarter to make it 21-0 Fannin. 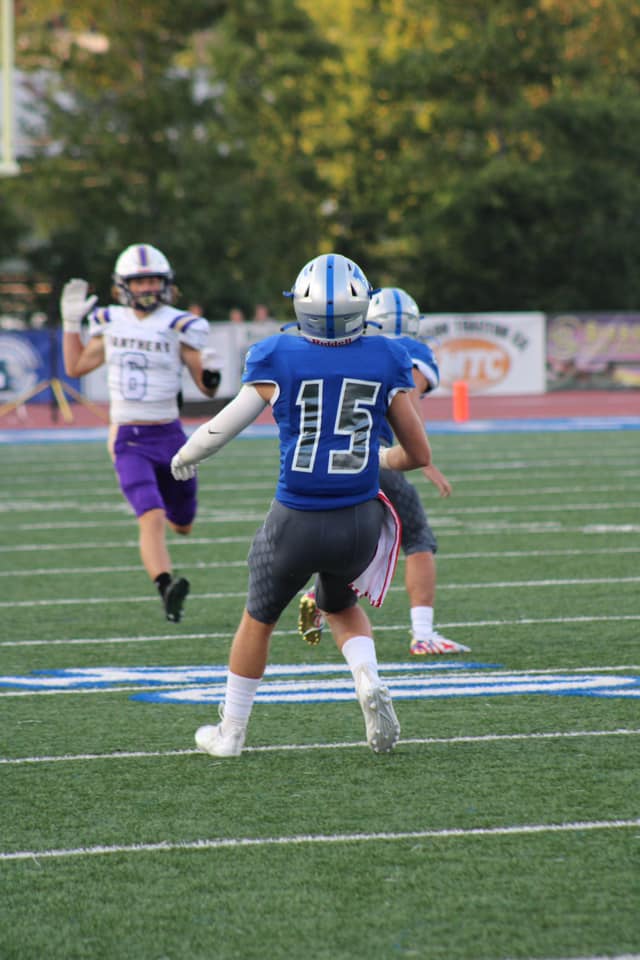 Sawyer Moreland catches the opening kickoff earlier in the night

On the following Union County drive, Case Holloway had a near sack on Helcher on 1st down. Union would pick up a 1st down 2 plays later on 3rd and 10.  Issac Davis and Cason Owensby would come up with tackles. Helcher and his Running back had miscommunication on the hand off and Case Holloway was able to come up with the fumble recovery. 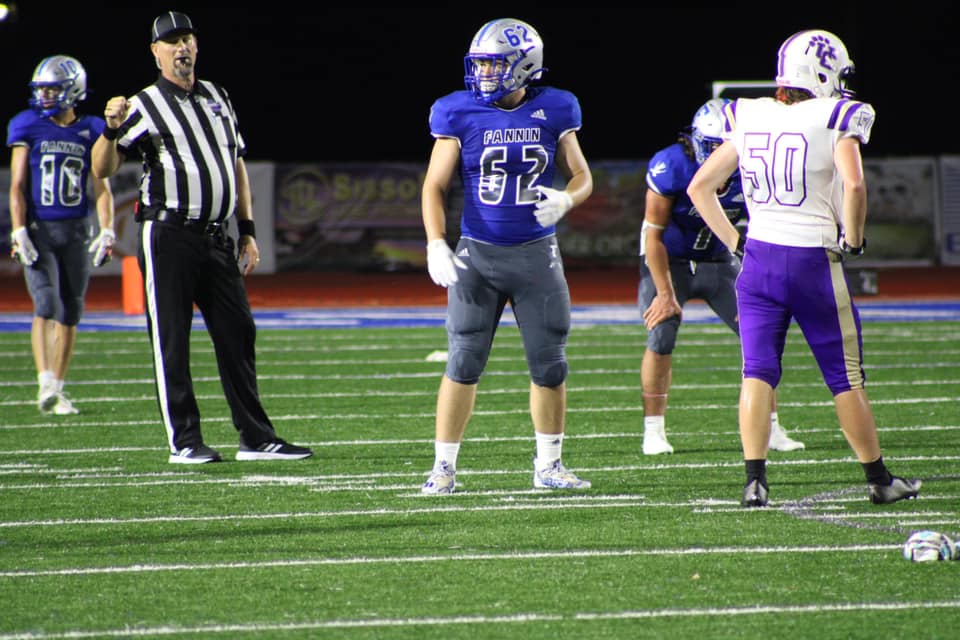 Fannin was unable to move the ball on their next drive and  were forced to punt back to Union. Nate Maloof, Carson Collis made tackles on Union County’s next drive. Helcher threw an incomplete pass on 3rd down and Union would punt the ball back to Fannin. Corbin Davenport had a great return to the Union County 23 yard line. 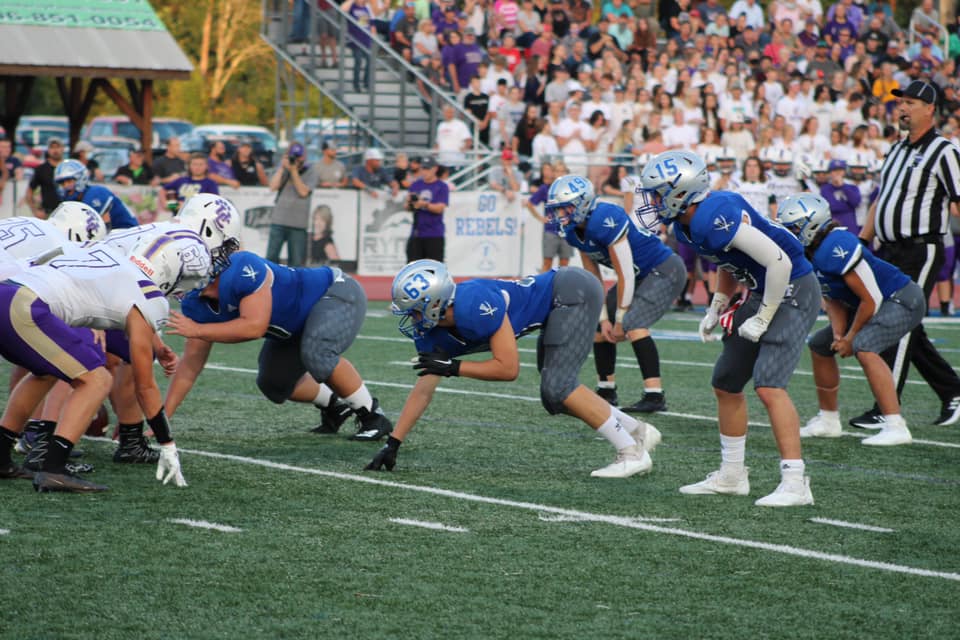 Next Play from Scrimmage David Mashburn found Seth Reece for a 23 yard Touchdown pass. Fannin would go for 2points but were unsuccessful. Fannin would take a 26-0 lead with 1:12 left in the 3rd Quarter.

Cason Owensby started the 4th Quarter off with a forced fumble and Issac Davis recovered. Fannin took the ball over on the Union 33.

The next 3 plays and 33 yards belonged to Khole Green. Khole punched it in on his 3rd carry of the drive to score his 1st Touchdown. David Mashburn punched in the 2 pt try to make it 34-0 with 10:59 remaining in the 4th Quarter.

Union was unable to get anything going on offense and punted back to Fannin.

Brody Paskill caught a pass and Jackson Davis picked up 11 yards in the quarter.

Union County would add an 83 yard TD Helcher to Griffen Young late in the 4th Quarter.

The Final Score would be Fannin 34 and Union 7

Notable Offensive Stats for the Rebels

Fannin County’s offensive lineman deserved a ton of credit for the job they did. Dylan Collins, Jeremy Tammen, Taylor Collis, Rico Arellanes and Logan Long among others done a great job all night.

Notable Defensive Stats for the Rebels

Logan Long and Carson Collis each forced a Fumble

Fannin County will host Copper Basin on Friday. This will be the 1st time since 1996 the 2 Schools have met during a game.  Stay tuned for a game preview later in the week.