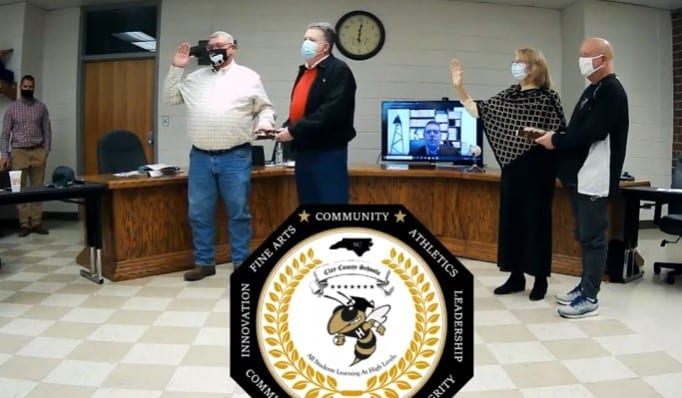 HAYESVILLE, NC – The two reelected board of education members, Danny Jones and Reba Beck took their oath of office during the December 14, 2020 meeting.

District Court Judge Tessa Sellers administered the oath. Jones and Beck swore to uphold the Constitution of the Unites States and North Carolina. They also promised to uphold their offices as board of education members.

Superintendent Dale Cole attended the meeting virtually after being advised to quarantine by the health department.

Cole thanked the Clay County Historical and Arts Council for bringing culture and enlightenment to students.

The school district is also looking to consolidate technology used between teachers and parents by moving to Edlio Engage App. It’s a source of two-way communication between teachers, parents, and students. Edlio can also translate from English to Spanish, eliminating some of the lost in translation issues. A new website is also in development to provide a more user-friendly experience for visitors.

The board implemented a new school mental-health policy that was required by the state. The focus of the policy is on the whole child, not just education, but physical, mental, environmental, and education. The district previously hired four counselors for each school and a social worker. With the extra stressors of 2020, students greatly benefited from having counselors to speak with.

board of education Clay County Schools Sworn in

ELLIJAY, Ga. – Among the final acts for Gilmer County’s government in 2020 comes the official swearing in for elected positions. Now that the local elections have long since completed and been finalized, these officials are preparing to take office as soon as January 1, 2021, now that they have been sworn in.

While many positions were re-elections like Hubert Parker moving from the special elected term to fill in for the remaining term of former Commissioner Dallas Miller, others are fresh faces in new positions like Gilmer Magistrate Judge Kevin Johnson.

In the realm of the Board of Education, new members Joe Pflueger and Michael Parks met with Probate Judge Scott Chastain to take their oaths on Friday, December 18, 2020. Additionally, Doug Pritchett also renewed his oath of office as he was re-elected after filling in for the remaining time of the previous term.

Two weeks before the new year and their own first days in the position, they met in Courtroom D of the Gilmer County Courthouse for a ceremony with close friends and relatives. Owing to the virus and procedures against it, each brought a very small group to witness the event.

Doug Pritchett was sworn in under oath with his wife, Lynne Pritchett, holding the bible for him.

Michael Parks was sworn in under oath with his wife, Donna Parks, holding the bible for him.

Joe Pflueger was sworn in under oath with his wife, Jeris Pflueger, holding the bible for him.

Each member swore two oaths, one for the office and the responsibilities associated with it, and another as a loyalty oath to people and the government,

Chastain told FYN that these would be the final oaths as he had previously administered much of the other renewals during the same day. 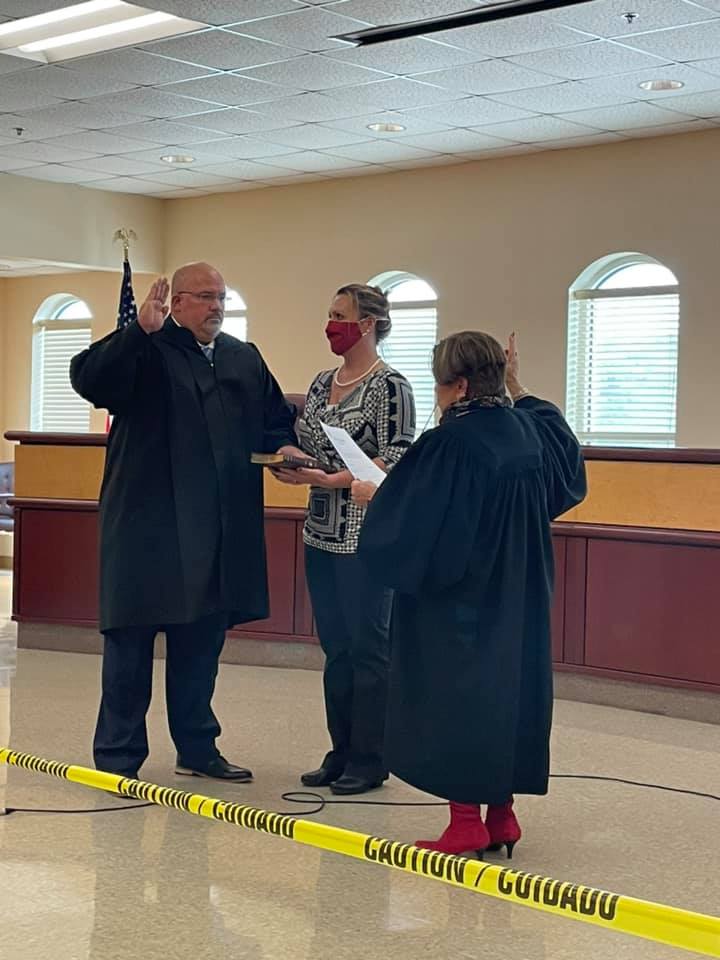 However, Kevin Johnson, newly elected Magistrate Judge of Gilmer County, received his oath of office on Thursday, December 17, 2020. He was sworn in by Judge Brenda Weaver in the presence of current Magistrate Judge Roger Kincaid and Probate Judge Scott Chastain.