EAST ELLIJAY, Ga. – With a letter from from the state reapportionment office suggesting changes, this Thursday will see the Gilmer Board of Education considering redrawing district lines for the county in regards to the board members. 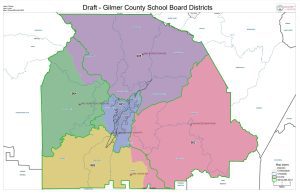 Redrawn district lines as presented to Gilmer BOE by the state.

This does not affect the county’s voting registration or citizens voting districts within the county. Instead, it changes the lines of the county and the districts that each board of education members’ seat represents. The diagram, pictured to the right, shows these changes on Gilmer’s map. The green lines represent the former district lines, established in 2012. The colored sections represent how the districts will look if approved on Thursday.

Based on the recent census, Superintendent Dr. Brian Ridley told board members that the changes look to rebalance populations within the districts.

According to documents presented in their work session, this redraw will see each district with just over 6,000 people living in each of the districts.

This redistricting has not been approved yet, but is set for consideration this week, having the districts set for the coming election. 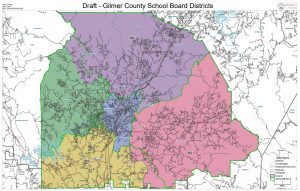 About voting on board members, Dr. Ridley stated, “The only thing that this affects is where future board members may live. Since all of you are voted on at large, it really doesn’t have any effect on who votes for who.”

Board Member Joe Pflueger question the origination of the map and Dr. Ridley clarified that the map was redrawn and provided by the state reapportionment office. Pflueger further noted that there has been no local input on the districts map as presented so far. Comments were made that the board would discuss legal options in executive session.

Dr. Ridley did note that the board could accept the map as presented or potentially alter it and ask for changes. Tomorrow’s, January 27, 2022, Regular Meeting of the Gilmer BOE will see the board’s decision on the map at 6:00 p.m.