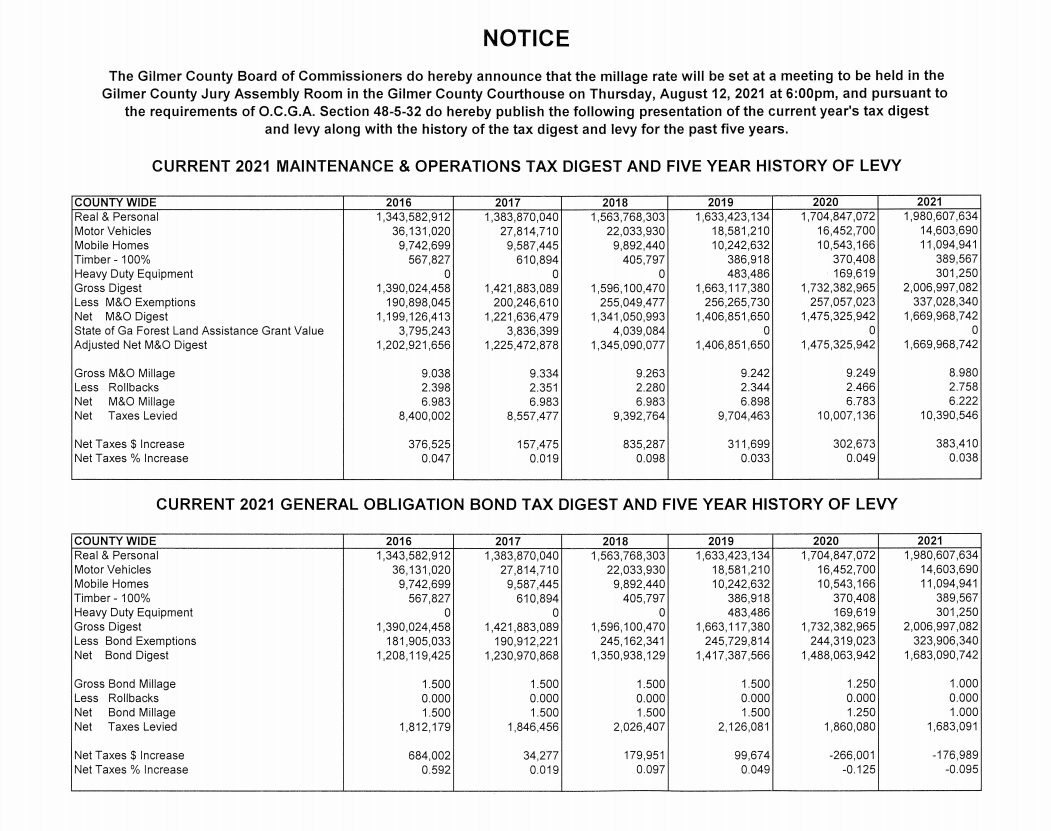 ELLIJAY, Ga. – A unanimous vote on Monday, August 24, 2020, saw the Gilmer County Board of Commissioners follow up on statements from last year where they discussed lowering the Bond Millage Rate in the county.

While they did not approve lowering the rate in 2019, many citizens have continued discussing and pushing for the reduction this year. A few have very vocally called for the reduction of the “extra half mill” that was put on the Bond Millage rate raising it from 1 to 1.5 mills. Additionally, the viral outbreak and subsequent shutdowns of counties and states cast a dark shadow on local economies and doubt for the financial future of Gilmer.

The Commissioners halted capital spending and major projects as they watched and waited to see just what kind of impact it would have, even delaying their pool project that has been underway for over a year now. The pool was closed at the beginning of May in 2019.

However, the last two months have shown quite the difference. Despite the cancellation of major events in the county and increasing numbers from the virus, recent reports show an increase in collections from tourism and SPLOST.

Whether this played a role in their decision, the commissioners did not say, but they did approve a drop in the bond millage rate by .25 mills, taking it from 1.5 to 1.25 mills.

The School-Board-approved millage rate of 13.963 was approved to be implemented by the Board of Commissioners. This is the Rollback Rate calculated for Gilmer County Schools as they have advertised over the past month since the July meeting. The Board of Education approved this rate last week during their regular August meeting.

They also moved forward with approval of the county’s M&O (Maintenance and Operations) Millage Rate of 6.783 mills. This is also a Rollback Rate calculated for the Board of Commissioners and advertised for the past month since their July Meeting.