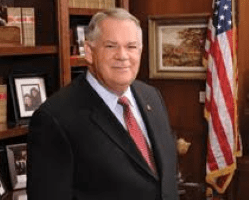 BLUE RIDGE, Ga – Georgia Speaker of the House David Ralston (R-Blue Ridge) advised prudence before superseding the state constitution. Mayor Giuliani presented a witness in last week’s Georgia Senate hearings who urged the General Assembly to convene under Article II of the U.S. Constitution. The move would overrule state law that a special session can only be called the governor or three-fifths majority from both legislative bodies.

Previously, Ralston and Giuliani spoke about the Article II option are looking into it. If a constitutional method surfaces, Ralston confirmed that he would be open to it.

“I’m not sure what that would look like,” Ralston stated. “We’ve got to be very, very careful because whatever we do will set a precedent. This issue of can we come into a session and disregard the fact that there’s been two or three certifications, whether we agree with them or not…that’s something I think we’ve want to tread very, very carefully around because that could be used against us someday.”

During a phone call with President Trump, Ralston relayed that the President was “upbeat” and wants a special session of the General Assembly. The Speaker warned it would be an “uphill battle.”

Governor Brian Kemp (R) released a statement on Sunday, December 6, stating that calling a special session to establish “a separate slate of presidential electors is not an option that is allowed under state or federal law.”

Also, the General Assembly doesn’t have the required three-fifths majority to convene. According to Ralston, the House is two votes short.

He added that President Donald Trump (R) could make a case that he won Georgia, and Ralston has reviewed “enough evidence to raise questions that need to be answered.” For this reason, Ralston hasn’t signed any statements supporting the outcome of the Georgia election.

“I’ve never seen in my public career the level of anger and concern that’s out there now. People are very upset, and I get that. I’m upset,” Ralston said. “I believe it’s vital he be reelected. His policies are good for this country, particularly when compared to policies of the other party.”

The Speaker admonished anyone considering not voting in the January 5 runoff, calling it “handing over the keys of the U.S. Senate to Chuck Schumer.”

On Thursday, the House of Representatives Governmental Affairs Committee will convene to discuss Georgia’s elections.