Written and submitted By D.A. King

In 2011, Aurelio Mayo Perez, an illegal alien, was booked into the Cobb County jail for no driver’s license but released due to an immigration enforcement reduction edict from then-President Barack Obama. Two years later, Mayo Perez was charged with aggravated child molestation and rape. The name of the ten-year old girl he was convicted of repeatedly molesting is not available.

Last week, newly sworn Cobb County Sheriff Craig Owens held an elaborate press conference packed with invited anti-enforcement activists and proudly announced his termination of the 287(g) program. The Marietta Daily Journal described the event’s big finish with “…as the event ended, and a mariachi band began to play, the mood in the room was decidedly celebratory. The new sheriff even took to the floor and waltzed for a moment, reveling in his audience’s approval.”  Cobb County Deputy Sheriff Loren Lilly – killed in a 2007 traffic crash by an unlicensed illegal alien driver – was unable to attend.

Created by Congress in 1996, and signed into law by Bill Clinton, the voluntary 287(g) program is a tool used to expand the authority of local law enforcement to locate and report to ICE illegal aliens, usually in county jails. It’s a deterrent. Then-Senator Joe Biden voted in favor of passage.

The Atlanta Journal-Constitution reports Owens claims “the program morphed into one that profiled immigrants through traffic stops, which resulted in them being deported on misdemeanor charges.” While Sheriff Owens – a former Cobb County policeman – is certainly free to smear his fellow law enforcement officers with shameless accusations of profiling, he should understand that it’s illegal aliens who are deported and that removal is the punishment for illegal immigration, not traffic violations.

Jose Alfaro-Contraras, an illegal alien from El Salvador, was one of the gunmen in an April, 2015 armed robbery of the owner of a check-cashing store in Duluth. A year earlier, Alfaro-Contraras had been in the Gwinnett County jail on a shoplifting charge. He was released because “minor crime.” 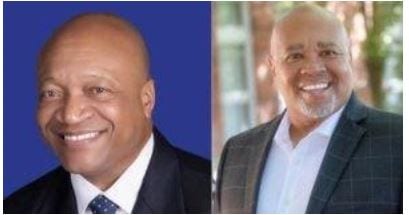 In Gwinnett County, on his first day in office, Sheriff Keybo Taylor made his enforcement policy clear when he quit the 287(g) program: “What we will not be doing is notifying ICE of anybody’s immigration status in the jail or any of our facilities…” said Taylor at his own presser. He told a local NPR interviewer 287(g) is slanted towards “people of color.”

“So basically, what that program started to do was target, uh, you know, people of color that were in this country that’s undocumented, so, you know, it became, you know, a racist issue for me…”,

Taylor says he would rather focus on gang members. I was curious, so I checked with experts on gangs in Gwinnett and the skin color concern Taylor expressed. But on that topic Sheriff Taylor does have worries about borders “…crime and criminals…they don’t, they do not respect borders, so, you know, it’s nothing to come from Atlanta to Gwinnett County…” says Taylor. Indeed.

In print and radio interviews, both sheriffs have done a remarkable job of learning and adhering to the anti-287(g) talking points distributed by the far-left. Below are some of those tips from a 2008 ACLU ‘toolkit.’

‘How to oppose 287(g) agreements in your state or locality’

* Always describe how police enforcement of immigration laws endangers public safety for everyone.

* Assert that local police of immigration laws will result in widespread racial profiling.

* Assert that immigration enforcement is the responsibility of the federal government.

Georgia law: A ‘Plan B’ to address anti-enforcement sheriffs

Attention Georgia prosecutors, including Flynn Broady in Cobb County: Independent of 287(g), longstanding (2006) state law (OCGA 42-4-14) requires jailers to check the immigration status of incoming foreign prisoners. “If the foreign national is determined to be an illegal alien, the keeper of the jail or other officer shall notify the United States Department of Homeland Security, or other office or agency designated for notification by the federal government.”

This “Plan B” would be much more effective if it is actually enforced and if Gov. Kemp would end his silence on illegal immigration. See the Dustin Inman Society Brian Kemp file here.