Doug Collins, a contender for U.S. Senate in a field of 20, stopped in Jasper to talk to crowds and engage “in the sounds of freedom” at the Appalachian Gun, Pawn and Range. After voicing his support for the Second Amendment, farmers, and pro-life, the representative took time to try out the indoor range, even helping Simona Mangiante, wife of political insider, George Papadopulous, on her maiden shooting experience. 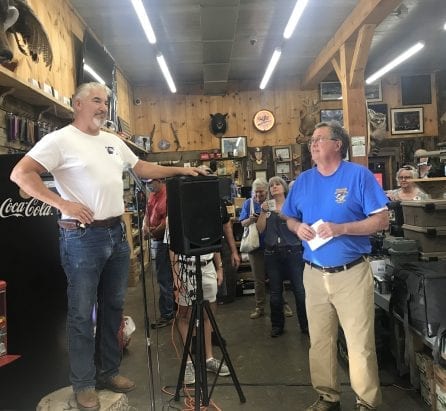 About 125 people turned out at Appalachian Gun, Pawn and Range to hear Senate candidate Doug Collins speak. Collins, who currently serves as Georgia’s 9th District representative is one of 20 on the ballot for the Special Election to fill Sen. Johnny Isakson, who stepped down due to health. Kelly Loeffler was appointed by Governor Brian Kemp to fill the term until the special election.

Collins said he doesn’t begrudge Kemp for choosing Loeffler, but he with the election coming, it’s anyone’s game.

“Donald Trump wanted (me). Kemp had the right to make his choice and he made it. but he only gets one vote, the State of Georgia is going to get the vote now,” Collins said.

Collins told the audience that they can believe he would defend their second amendment rights, something the Loeffler campaign has accused him of being against. He reminded the audience in AGP that he was the son of a trooper. “I learned to shot a gun before I learned to ride a bike,” he said.

“I received a mailer from the Loeffler campaign,” Rep. Rick Jasperse said. “On the back side, it accused Collins of not being pro-life. I’m calling b-s.”

Jasperse went on to tell the audience that Collins was the number two signer of the H.R. 784, the Pain-Capable Unborn Child Protection Act.

Collins himself pointed out that he and his wife “shut the doctors down” when they suggested aborting their third child after tests revealed she had spina bifida.

“It’s amazing to be down here in God’s country,” said Papadopouls, who served time in federal prison for making false statements to investigators during to the now debunked Russia collusion scandal. “We are in a war, we need a fighter. This isn’t a normal time in our country. The democrats want to take your country, your liberty,. They are communist. I like to be on the offense. I want someone who will fight for the Constitution. We’re going to keep this country great. We want the Nadars and Pelosis and even Hillary Clinton thrown in the dust bin of history.”

On the local level, Ralph and Kim Fritts, owners of AGP, supported Collins.

“If we don’t have people who don’t think like us, we’re in trouble. It’s concerning what could happen,” said Ralph Fitts.

Collins ended his visit by checking out the indoor firing range, taking time not just to look, but to try it out.

“I love waking up in the mornings to the sound of freedom,” he laughed.