ELLIJAY, Ga. – After a lightning strike hit the Central Office of Gilmer County Charter Schools damaging internal systems and losing power, back-up power in the form of a generator and UPS (Uninterruptible Power Supply) systems for emergency power proved to be insufficient for the office building. A situation that the Board of Education is looking to rectify after inspections have provided options for replacement.

The emergency power system could run operations for roughly 30 minutes, enough time to save projects and shut down or to active that generator to take over. However, the full generator is needed for anything longer. One of the issues the board has faced is that when the system tries to run off of the generator, the system overloads and shuts down. With new systems having been added over the years, the generator was never updated to keep up with the additional electrical draw.

Adding in a new 250 amp interface switch in addition to replacing the actual generator is just the start of the costs for the school. The switch itself will cost about $13,000 according to Superintendent Dr. Brian Ridley. 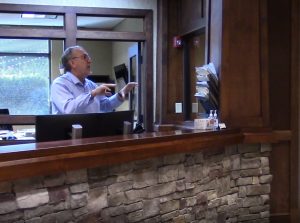 In addition to the switch, continuing supply chain issues mean that a replacement will take between nine and twelve months to get here. Dr. Ridley informed the board that one option for immediate response could be to rent a 250 amp generator for $2,800 a month until the replacement arrives. He quoted a total cost before installing anything new to be $47,396.

He went on to tell the board that he could get the switch and rental generator quickly and address the office’s back-up power issues. Additionally, all of the information given for replacement generators was an estimate from inspections and repairs. Ridley said the board would have to go through the process of a Request for Proposals (RFP), but wanted to offer the immediate information to the board so they would have an idea.

The board was also informed that the lightning strike also damaged the UPS Emergency power systems.

Boardmember Michael Parks stated, “If we’re going to spend that much money, we need to make sure it’s going to work for what its purpose is meant for.” Advising extra caution as the office already built over its capacity once. He said he didn’t want to gamble on a generator that will also immediately fail do to overload, suggesting that they take time to gauge and see exactly how much power the system needs.

The board was assured that the school system has already had two separate electrician’s look at the system and would also go through the RFP process, fully covering their bases on the office’s needs. The 250 amp generator would run the critical systems, but not the whole office. The 800 amp generator could support everything. No action was taken in the meeting as Ridley wanted to inform the board of the situation so they could ask questions and deliberate on the path to take.

The board also briefly discussed purchasing the additional generator to support their current one, operating both simultaneously. But as the school system continues collecting information, this and other options will be revisited in the October meetings.