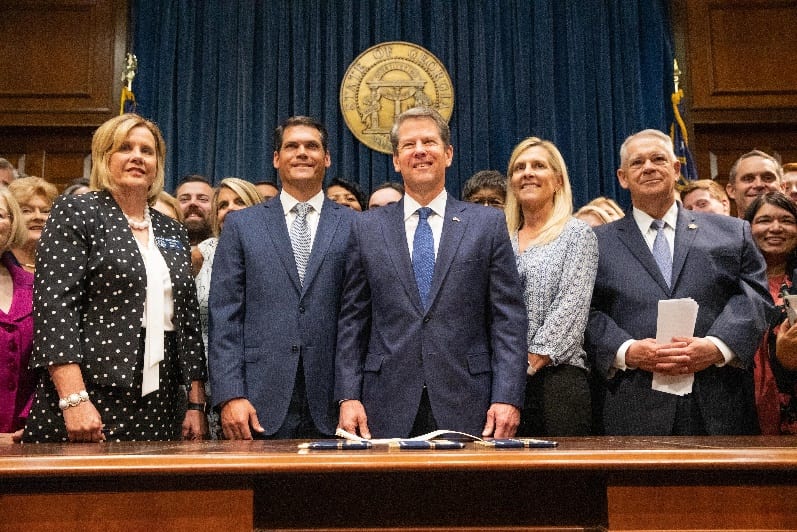 HB 481 prohibits abortion when an unborn child has a detectable human heartbeat. It contains exceptions in the cases of rape, incest, risk to the life of the mother and medically-futile pregnancies. The law becomes effective on January 1, 2020.

Speaker Ralston spoke at today’s bill signing ceremony and the text of his remarks is below:

Good morning. I’m honored to be here – to stand with Governor Kemp and Lt. Governor Duncan – to once again reaffirm Georgia’s commitment to the sanctity of life.

At its core, House Bill 481 – appropriately known at the LIFE Act – is about protecting those who truly cannot protect themselves.

I realize this is a contentious issue – one with strong emotions on both sides – and I want to applaud all those who participated in this debate respectfully.

I particularly want to thank Chairman Ed Setzler for the manner in which he carried this legislation. Chairman Setzler always kept the policy front and center.  He did not dwell on politics and he did not demonize those who disagreed with his point of view.

As is true to his character, he worked tirelessly with the sole objective of arriving at the best policy for this state and its citizens.

I want to commend my friend, Chairman Ed Setzler, and thank him for how he represented our House.

He had a strong team of supporters in his corner, from advocates like Georgia Life Alliance and the Faith & Freedom Coalition, to other members of the House – many of whom worked and prayed alongside him.

But, as I close, I’d like to acknowledge and thank the strongest supporter of this legislation – our Governor, Brian Kemp.

Governor Kemp is a leader whose compass does not bend with the polls or pundits. He was clear from the beginning that making Georgia a leader in protecting life was a top priority.

Governor, thank you for your leadership – I’m honored to serve with you.

***Editor’s Note:  A video of the bill signing ceremony is available on Governor Kemp’s Facebook page.