On Wednesday I stopped by one of the local rec departments to iron out some details for an upcoming event that Team FYN Sports plans to cover. As often happens in small towns where time seems to move a little slower, you can’t go into a place where people are as close as a rec department and just have your meeting and leave. You end up talking about something like, in this case sports, that leads into one topic after another. Add a couple more people into the mix that you haven’t seen in a while and soon enough you glance down at your watch and you’ve been there for two hours with no idea where the time went. Southerners especially know what I mean.

Anyway, naturally with this being SEC country we had to talk about college football. And even more so when one of the people in the conversation was a Tennessee fan (you know who you are!)

Eventually our conversation turned to memories of our first college football games. The memories spanned years and were entwined with heartfelt stories of family, friends and Sanford stadium. There were tales of witnessing games where records were set and broken, of firsts and lasts. A couple of us could even recall games with rivalries so bitter that a rowdy fan from the opposing team was either physically injured or injured with glares. 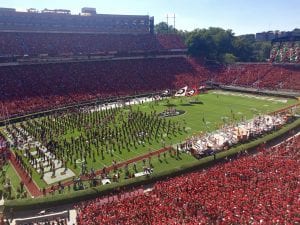 Ah the glorious Sanford Stadium! And during a Georgia/Tennessee game, too!

For each of us that was sitting in the room we had a look of wonder in our eye. We were recalling memories that were so precious to us that we wouldn’t trade them for all the University of Florida defeats in the world. Especially the ones were loved ones were involved. Those are always the most precious.

Hearing those glorious tales took me back to my own first University of Georgia game. I couldn’t tell you who they were playing, but I remember watching the team run out with the big Georgia flag and feeling a since of pride I hadn’t felt before. I was with my mom and my grandparents. I had never seen my Nana get so rowdy. And my Papa Skip was especially proud to have the three most important women in his life with him and dressed in red and black. And a new love was born for me.

As a side note, my brother would later commit the ultimate sin in that side of the family and declare himself to be a Florida fan. I’m sure it broke Papa’s heart at the time, but he soon got over it when he had someone to accompany him to the Georgia/Florida game besides my Nana. Such is the seriousness of rivalries in the Southeastern Conference. 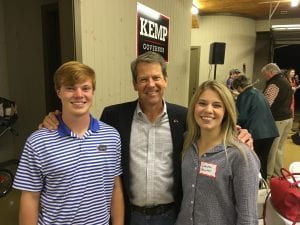 Here is a gem of a picture featuring my brother Devin, wearing a Florida shirt, and I with Governor Brian Kemp, who is a UGA alum. Even the governor gave Devin a hard time for being a Florida fan!

I know I probably sound like a broken record by now, but I firmly believe that nothing besides religion brings people together like a football game. Which is probably why it’s so common to refer to football as a religion in the South. You may hate someone during the week, but come Saturday morning if you’re both wearing red and black you’re going to at least be cordial.

I know that it may be more intense in other college towns, but in Athens people will arrive a full day early to claim their tailgating spots. Red and black tents flood the streets of downtown on every plot of grass that grows. Women (including myself) will go to get their nails and hair done ahead of time, and dress to the nine in ninety degree weather. There is no telling how many hundreds of thousands of dollars get spent on food and drinks for one weekend of tailgating alone.

I was recently watching an old episode of the show Designing Women. For those of you who aren’t familiar with the show, it’s about four women running an interior design firm in Atlanta. In one scene Julia Sugarbaker, who is the sharp-tongued primary owner of the firm, is leaving for a football game with one of her co-workers. Sadly, she was going to a Georgia Tech game, but we’ll overlook that part for now.

As the two characters are heading out the door, Julia says that she and her husband used to plan their weekends around the Georgia Tech games. She quips, “In the East, football is a cultural exercise. In the Midwest, it’s cannibalism. In the West, it’s a tourist attraction. But in the South, it’s a religion!”