The U.S. Women’s National Team has been making headlines recently for victories as a team, and as individuals for political statements.

Last week, the team won their second back-to-back World Cup. Shortly after the game, player Allie Long was seen dropping an American flag during the post-game celebration. Her teammate Kelley O’Hara recognized the significance of a flag being dropped on the ground, and immediately scooped it up.

One report from The Daily Wire explained that Long dropped the flag to participate in a celebratory dance with teammate Megan Rapinoe. But the video quickly went viral and comments poured in criticizing Long for her carelessness and thanking O’Hara for stepping in.

It’s very possible that Long meant no disrespect, but just got caught up in the moment and didn’t know that an American flag is NEVER supposed to touch the ground. Nonetheless, millions of viewers were not happy.

If you watch the video, it doesn’t appear that Long is trying to make any sort of political statement by dropping the flag. However teammate Megan Rapinoe has CERTAINLY been making headlines recently for her statements. 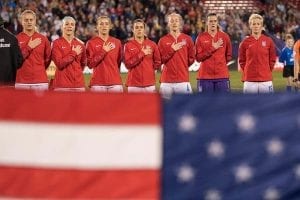 Megan Rapinoe (far right) is a great soccer player, but her political statements anger some. Credit: The New York Times

Although Rapinoe is mainly known for being a phenomenal soccer player (she won both the Golden Ball and Golden Boot awards this year), her progressive ideals have, let’s just say…raised eyebrows. Rapinoe is very outspoken about her homosexuality and dislike of President Donald Trump.  She has followed the example of former NFL quarterback Colin Kaepernick by refusing to sing or put her hand over her heart during the National Anthem. The pose she makes after scoring a goal of standing with her arms outstretched is supposed to be a symbol of fighting for equal pay, race relations and issues at the United States/Mexican border.

For years athletes have used the attention given them for their athletic success as a means to shed light on their social platforms. There’s nothing wrong with that if they’re promoting awareness for a disease or a foundation that supports children with special needs. But should we as a society draw a line when it comes to political issues?

Some would say there’s no problem- depending on what they do to make the statement. Certainly being a famous athlete gives one more media attention than the average person. Like I mentioned in my last column post, there’s no difference in an athlete and an actor or actress, and they supply their endorsement all the time!

When Colin Kaepernick first kneeled during the National Anthem in 2016, many Americans were outraged. Not necessarily because of his protest of police brutality, but because he chose to do so in a way that many Americans found disrespectful to those who have served in the military. I was, and still am, one of those people. In my opinion Kaepernick and now Rapinoe are missing the mark. Kneeling or not showing respect during the National Anthem is to turn a blind eye to those who have sacrificed everything to give you the freedom to play your sport. It doesn’t have anything to do with first responders.

Nowadays there’s a gray area between sports segments and political talk shows. The two intersect on a daily basis. Just the other day on our live sports show, Instant Replay, my co-host Dave Garner and I had an entire segment dedicated to Nike’s decision to pull the sneakers with a design of the American flag sewn by Betsy Ross on the back. This decision was made after Kaepernick insisted that the flag had a racial history. 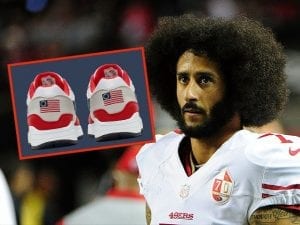 I thought Colin Kaepernick was out of the spotlight, but he found a way back in.

I suppose the whole reason this gray area exists is because of the technological advancements of the media. Celebrities who want use their status as a means to promote a certain viewpoint can do so more quickly because of how easy it is to post to Twitter. And in a society that demands news at every moment, something has to take up time in a sports show!

So back to the original question- should there be a line, and if so, where?

Here’s my opinion- sports is sports and politics is politics. Part of the reason I watch a football game or a baseball game is because I want to watch a football game or a baseball game. We are living in a time where politics are more divisive than ever before. One reasons sports are as big as they are today is because of the communities they create. Why should we mix something that causes so many problems to interfere with something that is supposed to help solve them?

When I turn on ESPN, I don’t want to listen to people debate over what is considered disrespectful to the National Anthem. And the next time I watch Fox News, I DARN sure don’t want to hear the name Colin Kaepernick.