SOCIAL CIRCLE, Ga. (March 18, 2019) – Georgia turkey hunters are ready for the season to open on Saturday, Mar. 23. The 2019 turkey hunting season should be a fair season, similar to 2018, according to the Georgia Department of Natural Resources’ Wildlife Resources Division.

“Reproduction in 2017 was lower than the four-year average, so that could mean a lower than usual supply of 2 year-old gobblers across much of the state in 2019,” explains Emily Rushton, Wildlife Resources Division wild turkey project coordinator. “However, that lower average comes between two better years, so hopefully other age classes will remain plentiful.”

With a bag limit of three gobblers per season, hunters have from Mar. 23 through May 15 – one of the longest seasons in the nation – to harvest their bird(s).

What should hunters expect this spring? The Ridge and Valley, Piedmont and Lower Coastal Plain should have the best success based on 2017 reproduction information. The Blue Ridge region had a poor 2017 reproductive season, but saw a significant jump in 2018, so there may be a lot of young birds in the woods. The Upper Coastal Plain saw reproduction below their five-year average for the past two years, so numbers in that part of the state may be down.

Cedar Creek and Cedar Creek-Little River WMA Hunters, take note! The 2019 turkey season will run April 6-May 15 on these properties. This is two weeks later than the statewide opening date. This difference is due to ongoing research between the University of Georgia and WRD, who are investigating the timing of hunting pressure and its effects on gobbler behavior and reproductive success. Through this research, biologists and others hope to gain insight to the reasons for an apparent population decline in order to help improve turkey populations and hunter success at Cedar Creek WMA and statewide.

Georgia Game Check: All turkey hunters must report their harvest using Georgia Game Check. Turkeys can be reported on the Outdoors GA app (www.georgiawildlife.com/outdoors-ga-app), which now works whether you have cell service or not, at gooutdoorsgeorgia.com, or by calling 1-800-366-2661. App users, if you have not used the app since deer season or before, make sure you have the latest version. More information at www.georgiawildlife.com/HarvestRecordGeorgiaGameCheck.

Hunters age 16 years or older (including those accompanying youth or others) will need a hunting license and a big game license, unless hunting on their own private land.  Get your license at www.gooutdoorsgeorgia.com, at a retail license vendor or by phone at 1-800-366-2661. With many pursuing wild turkeys on private land, hunters are reminded to obtain landowner permission before hunting.

Conservation of the Wild Turkey in Georgia

The restoration of the wild turkey is one of Georgia’s great conservation success stories.  Currently, the bird population hovers around 300,000 statewide, but as recently as 1973, the wild turkey population was as low as 17,000. Intensive restoration efforts, such as the restocking of wild birds and establishment of biologically sound hunting seasons facilitated the recovery of wild turkeys in every county. This successful effort resulted from cooperative partnerships between private landowners, hunters, conservation organizations like the National Wild Turkey Federation, and the Wildlife Resources Division.

The Georgia Chapter of the National Wild Turkey Federation has donated more than $4,000,000 since 1985 for projects that benefit wild turkey and other wildlife. The NWTF works in partnership with the Wildlife Resources Division and other land management agencies on habitat enhancement, hunter access, wild turkey research and education. The NWTF has a vital initiative called “Save the Habitat, Save the Hunt,” focused on habitat management, hunter access and hunter recruitment.

“Hunters should know that each time they purchase a license or equipment used to turkey hunt, such as shotguns, ammunition and others, that they are part of this greater conservation effort for wildlife in Georgia,” said Rushton.  “Through the Wildlife Restoration Program, a portion of the money spent comes back to states and is put back into on-the-ground efforts such as habitat management and species research and management.” 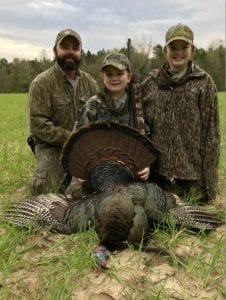 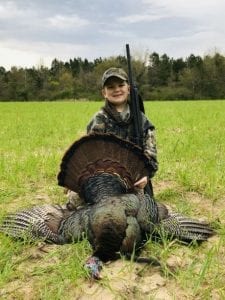