This seems far, far away from “voter suppression.” The drivers license Georgia issues to
non-citizens – including illegal aliens who have already been ordered deported – is
acceptable and “proper identification” when casting a ballot.

This, according to multiple staffers at the main office of the Cobb Board of Elections and
Registration office in Marietta when asked multiple times by this early voter last week. To
get an answer, I had to explain what a limited term license is.

For those who are not well versed in the topic, the drivers license DDS issues to foreigners
is labeled “LIMITED TERM” across the top, which is the only difference between it and a U.S.
citizen’s drivers license. 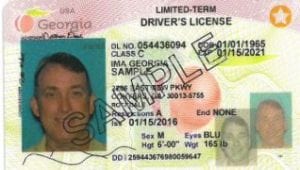 The acceptance appears to be in compliance with Georgia law (OCGA 21-2-417) which
merely says “proper identification shall consist of any one of the following: A Georgia
driver’s license which was properly issued by the appropriate state agency;…”

This brings to mind the several attempts in the last few years under the Gold Dome to
clarify the limitations of the limited term driver license, which, generally, is supposed to be
valid for the period of an alien’s visa.

In the 2017 General Assembly, House Rep Alan Powell introduced a bill to add “INELIGIBLE
VOTER” – which was a compromise to his original language, which would have added the
term “NON CITIZEN” to the non-citizens drivers license. Powell came under attack from the
anti-borders lobby and their media allies and his attempt at driver’s license/voter ID
reform died in the Republican-controlled House.

More than 20,000 aliens who have received a deferral in deportation proceedings or who
have already been ordered deported also hold the same limited term license according to
information from DDS early this year.

In 2016, the state Senate passed a bill sponsored by Senator Josh McKoon that would have
marked the limited term driver’s license held by this group with “NO LAWFUL STATUS.”

McKoon rightly contended his bill would help prevent voter fraud and terrorism. The
driving and ID credentials are also accepted as ID to enter federal buildings and to board
airliners in America’s airports.

Including the Georgia Association of Latino Elected Officials (GALEO), corporate -funded
opponents argued such reform would “stigmatize” people and represented a ‘Scarlett
Letter’ for “immigrants.” The legislation died in the House.

For this writer, the lunacy that a drivers license designed and intended for foreign nationals
is accepted as valid ID to vote in Georgia is surpassed by the fact that literally no official I
have ever spoken to at my Cobb polling place over the years – supervisors included – had
ever even heard of a “limited term” drivers license.

Editor’s note: A version of this essay recently ran on the subscription website, Insider
Advantage Georgia