Exactly What is a “S___hole” Country?

I don’t really care that Trump asked why America was taking in millions of people from third world “S___hole countries,” and less people from European nations. He said Norway but he meant all of Europe. I don’t care because he said exactly what I think, indeed what many of us think. His choice of a descriptive adjective could probably have been better said but, really, it doesn’t matter because he’s right and we know it.

We are in fact overrun with third world creatures who don’t want to be American’s, they simply want to be in America, plant their culture, demand we recognize their language and, in the case of Muslims, accept their religion while they stand back daring anybody to challenge them because that would make us Americans, of Europeans origins, the real “racists” that Nancy Pelosi tells us we are.

Wasn’t Trump’s comment made in a closed door session with other legislatures, including Democrats? Shocked, they couldn’t wait until the meeting was over to rush out and tell the world that Trump’s was a ’racist’ and therefore it was necessary to return Democrats to power, because Trump doesn’t care for the little guys. The Democrats and their media cohorts, went berserk because of Trump’s alleged gaff, to reset our thinking to the socialist agenda and the new world order, a paradise without Trump or conservatives. And that’s what’s this is all about, destroying Trump and stem the damage he is doing to them.

I remind Democrats of the existing record collected over the years by audio and video tapes of politicians, both Democrats and Republicans, expressing their personal animus towards peoples who contribute nothing but drain the taxpayer coffers. It’s a program specifically designed to keep Democrats in power, filling the voter rolls with life victims sure to vote for the hand that feeds them.

Does anyone not remember Bill Clinton, referring to Presidential candidate Barack Obama, say: “in the past that guy would have been bringing us coffee?” Didn’t Marxist Senator Dick Durbin, call American soldiers just like Nazi’s, after the Iraq war ended?

The world is full of S__t hole countries. It can’t be denied. The attacked photograph is of Haiti. I’ve lived and worked in countries like these in my career. The one thing everyone of these places had in common was they were either war torn, in the process of rebuilding, or subjugated by Progressive regimes. These are people without hope so why should they even waste their energy trying to clean up the tons of cheap plastic and rubber deritius of failed economies.

Totalitarianism is the end product of Socialism. It comes when people finally realize that socialism is not providing for them as we see happening in Venezuela, Cuba, and Zimbabwe just to name three. Capitalism is the only driving force of economic prosperity left for mankind and the Democrats want none of it. Their best advocate is the demented Durbin and the loony Nancy Pelosi who reportedly said: “The people are too stupid to understand the global plan”

My first experience abroad was South Korea ten years after the Korean War. It was an armed military camp left in place by an armistice to protect South Korea and its defenders. Then, it perfectly fit Trumps description. Now I stand back in admiration as that country has become an asian economic powerhouse, even selling excellent motor cars here and around the world. The infrastructure I experienced, dirt roads, muddy ditches, trash heaps, broken military equipment not yet cleaned up from the earlier period, are all gone now.

Trump’s poor choice of words in a closed door session with Democrats should be a lesson for all. Do not include democrats in your parlays especially when they have no power. It was taken away from them so why should they expect to have influence on America’s future?  Bipartisanship is an old meme, now championed for Republicans by John Kasich who desperately wants to become President. He’s telling us, in essence, that he’s willing to give in to the Democrats socialist agenda.

Trump’s decision to deny the DACA compromise presented to him by the bipartisan group of three Republicans and three Democrats, is a perfect example of how a weak president could easily fall in line with the Democrats socialist agenda, as Kasich surly would, by telling us it advances hope for mankind despite the rule of law saying otherwise. The end result is that America would soon be over run by the denizens of third world  S__t holes countries, quickly turning America into one too. Trump is right!. 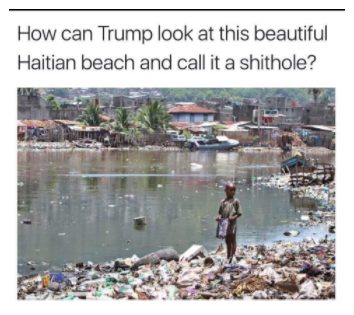