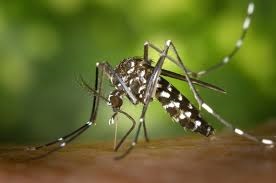 Will Zika virus come to north Georgia?  Yes.  When it will arrive and how widespread it will be is not so certain. 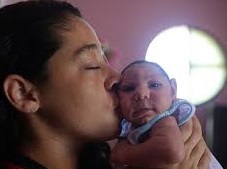 Mother and baby with microencephaly

For adults, the Zika virus means maybe a low fever, rash and achy joints for about five days.  But, only one in five adults with Zika show symptoms. It feels like a bad day for the body, but it doesn’t feel like common viral sicknesses, like the flu or a cold.  For the unborn though, the virus is devastating.  It can cause brain damage if the mother gets the Zika virus during her pregnancy.  In many case the brain damage causes microcephaly which means babies are born with smaller heads and the physical and thinking  functions of the brain can’t develop like child’s should.  Also, doctors are worried that there will be less visible results from the virus in babies that are born to mothers who got Zika during their pregnancy.  Doctors are not sure yet if brain damage will show up in children without microencephaly as the children grow older.

How will Zika come to north Georgia?  For a virus to spread well, it needs hosts, an environment that is very friendly to the hosts, a way to hide and a way to travel.

Hosts:  Zika virus is carried by the Adeas aeypti  mosquito and it is suspected that the Aedes albopictus mosquito carries the virus as well.  These mosquito lives all across the southern United States.  If an infected mosquito bites a person, the person gets Zika. The virus lives inside people for 10 days, even though symptoms, if shown at all, only last for five days.

Environment: Adeas aegypti mosquitos like hot and humid weather because humid weather keeps their favorite environment, standing water, easily available.  The mosquitoes like standing water because they must lay their eggs in standing water.  The standing water doesn’t have to be as large as a pond, just a tablespoon full of water in something like a discarded plastic cup is enough to be a nursery for the mosquitoes.    The mosquitoes particularly like trash piles because there are plenty of nooks and crannies where water hides.  Other favorite places are inside discarded tires, water bowls for dogs, piles of plastic bags where water pools of water can form, buckets that collect rainwater – anything that has water and is not covered. They also like living under dense underbrush where small, almost unseen pools of water aren’t touch by sun, so the pools can’t evaporate.

The mosquitoes’ favorite environments will help north Georgia control Zika outbreaks.  Southern cities like Savannah, New Orleans and Miami are surround by stagnant water in swaps and canals.  Also, trash piles in north Georgia are relatively spread out; the Aedes aegypti mosquitoes don’t travel too far from where they are born and where they lay their eggs.  In Savannah, for instance, the trash piles up in alleys right behind houses and close to other houses.  The trash is emptied only one time a week.  The egg to growth cycle only takes six and one-half days:  less than a day for the egg to hatch into larvae; four days to develop into a pupa; and, two days to metamorphose into an adult mosquito.  If trash pickup is only one time a week, then there is enough time for a new generation of mosquitoes between trash pickups.

How the virus hides:    Zika hides well in the body because the symptoms are not that obvious to humans since Zika does not make most people sick enough to know that they have the virus.

How the virus travels:  Viruses love to spread; it is their biological purpose. Viruses are successful where people live close to each other because a mosquito doesn’t have to travel far from one person to another to feed from a person’s blood.  So, cities in like Atlanta and Savannah, Zika can easily infect a large number of people.  Thus, the spread out population in north Georgia is an advantage for lessening the number of cases.

Since the Aedes aegypti mosquitos only travel around 1000 feet from where they are born, the Zika virus needs to hitchhike inside a person or a mosquito to travel long distances, like from Brazil, the center of the Zika outbreak or from Savannah, Georgia’s most vulnerable city, to north Georgia.

Travelers, both international and domestic are the biggest contributing factor to Zika arriving in north Georgia.  So far, most of the Zika cases in the United States are from travelers who have returned to the United States from a trip to Brazil or other Central and South American countries.  Pacific Island and some Southeast Asian nations are also reporting Zika outbreaks.  The world’s busiest airport, Hartsfield, is at most two hours away from remote areas of north Georgia.  There will be travelers who bring Zika to Georgia through Hartsfield airport.  Quarantining travelers at Hartsfield will be impossible because Zika remains in the body for 10 days and infected people, if they show symptoms, only have symptoms for five days. 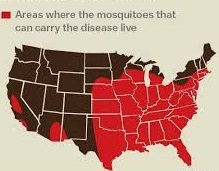 People traveling within the United States, even within their own state, will also bring Zika with them. Georgia already has one case.  Feb. 5th data from the CDC states the following states have cases of Zika:  Arkansas, California, District of Columbia, Florida, Georgia, Hawaii, Illinois, Massachusetts, Minnesota, New Jersey, Texas and Virginia.  The highest numbers are in Florida with nine cases and Texas with eight cases.

Zika will show up in north Georgia.  But, north Georgia’s spread out population and terrain will buffer us from a sizable number of cases.