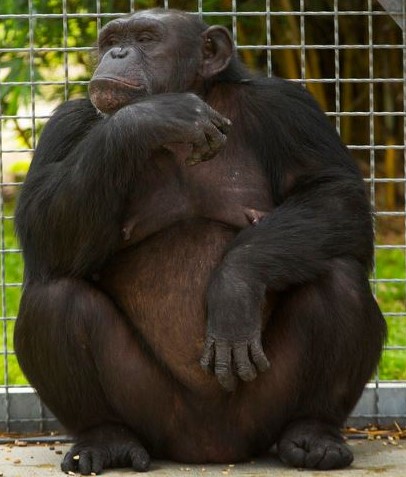 Project Chimps also invited FetchYourNews for a security tour at their facility.  On August 12th, FetchYourNews took them up on their offer.

Project Chimps is on 236 acres at the east end of Lowery Road. Right now, their operations are housed in structures left over from Dewar Land Trust’s Gorilla Haven.  Dewar Land Trust donated the facility to Project Chimps.  While open, Gorilla Haven housed up to four gorillas.  Project Chimps’ retrofitted the gorilla cages to serve the smaller-sized, less-powerful  but excellent climber chimpanzees.Along the road leading up to Project Chimps’ headquarters is a high barbed-wire electric fence. This is the secondary safety fence or the chimpanzees, or from the humans’ point of view, the first barrier in keeping people away from the chimpanzees.

Sarah Baeckler Davis, President and CEO of Project Chimps met FetchYourNews at the headquarters and from there we toured the facility.

The first stop was Cedar Tree Villa, which will house the first group of Project Chimps’ residents.  The Villa is completely ready for their arrival.  During transport to Fannin County, the chimpanzees will ride in individual steel-barred, large-sized crates.  The crates slide right up to the large cage doors.  The chimpanzees will go from crate to cage without any chance of escape and very minimal handling, if at all, from Project Chimps’ employees.  All cage doors have double locks.  Safety procedures are posted on the walls of all buildings and on the cage doors.  All safety procedures are checked again by another person.

The chimpanzees will spend the first few weeks completely inside Cedar Tree Villa becoming accustomed to their new home.  Later the chimpanzees will have access to an open-air play area.  Project Chimps’ is currently working on the concept for the open-air area and are awaiting for state agencies to give them the go ahead to build.  As the number of chimpanzees increases, Project Chimps will replicate the same features of their current facility in other compounds throughout the property.

Already an incredible amount of security features are in place around the open-air area, left over from Gorilla Haven.  The wall surrounding the area is 17 to 20 feet high of smooth concrete and has 28 miles of rebar inside it.  It is designed to withstand an F-7 tornado said Michael Reeves.  “The American Zoo Association certified the place and they don’t let anything slide.” Mr. Reeves was Head of Security for Gorilla Haven and lived on the property for two years during which they had access to the open-air area.  No gorillas escaped.

A view from Cedar Tree Villa across the open-air play area across to another villa.

Project Chimps will top off the trees inside the play area so the chimpanzees can’t scramble over the wall.  Around the outside of the wall is a gravel road.  No trees touch the outside of the wall.  Beyond the play area is the barbed-wire electric fence.  Ms. Baeckler Davis said that security will patrol the fences two times a day. Project Chimps practices for escapes.  Employees regularly train their dart gun marksmanship which requires different technical skills than handguns or rifles.

A view of the play area wall from the outside.

The facility also has its own veterinarian, Dr. Gwendy Reyes-Illg, and minor surgery and recovery room.  So, the chimpanzees can be taken care of without leaving the facility.

Ms. Baeckler Davis has a perfect safety record from her time as  Executive Director of Chimpanzee Sanctuary Northwest.

FetchYourNews contacted two other southeastern chimpanzee sanctuaries to compare Project Chimps’ security with that of other sanctuaries.  Chimp Haven in Louisiana has three multi-acre habitats.  Each habitat is surrounded on three sides by a high wall and on the fourth side by a water moat.  Chimpanzees can’t swim.   At the beginning, Chimp Haven had two escapes which occurred inside the building when moving chimpanzees into their cage said Chimp Haven’s President and CEO Cathy Willis Spraetz. The sanctuary rewrote their safety procedures and hasn’t had any other incidents. Save the Chimps in Florida is made up of several islands.  The facility doesn’t need walls because the water keeps the chimpanzees on the islands said Save the Chimps Executive Director Molly Polidoroff.

FetchYourNews asked Fannin residents if they were worried about chimpanzees escaping into the forest along Lowery Road.  One woman said, “Well, if I find a chimpanzee in my backyard, I know who to call.”

Post-Commissioner Larry Jo Sosebee stated concern about what diseases the chimpanzees could bring to Fannin County.  While it is true that some of the chimpanzees were involved in biomedical testing, New Iberia Research Center states, “The vast majority of the colony was never accessed for any research… and even fewer for biomedical research.” Before the chimpanzees can travel to Fannin County, their veterinarian in Louisiana must certify that they don’t have any diseases that are communicable to humans.

Post-Commissioner Earl Johnson asked Project Chimps if small animals could enter the open-air area and contract a disease and subsequently pass it on to humans.  FetchYourNews asked Ms. Willis Spraetz if Chimp Haven had any problems like this.  If raccoons, possums or squirrels get into the compound, the chimpanzees see them as a nuisance and hunt them, said Ms. Willis Spraetz.

FetchYourNews asked several sources associated with Project Chimps’ chimpanzee population about what the chimpanzees may have been tested for.  Some sources said hepatitis.  Beyond that, the information is property of New Iberia Research Center.

Project Chimps’ residents will have minimal contact with humans whether staff or volunteer.  Staff must undergo an extensive physical and vaccination regime. Staff will also wear protective clothing and face masks.  Currently, the closest volunteers will get to the chimpanzees is a picture window in the kitchen where they will prepare chimp smoothies and other food for the chimps.  There are plans to add an observation deck at a later date.

Mother Jade and her baby Ryker. They will retire at Project Chimps.

The Commissioners also wanted to know if the chimpanzees will breed at Project Chimps.  Sanctuaries do not breed chimpanzees.  All males have vasectomies and the females are on birth control. Sometimes the vasectomies reverse and, like with female humans, sometimes the pills fail said Ms. Willis Spraetz.  New Iberia Research Center also had an “oops” moment, hence the reason one-year old Ryker will be among the retirees.

The Commissioners will reconsider Project Chimps’ application at the Aug. 23 Board of Commissioners’ meeting at 6 pm at Fannin County Courthouse.