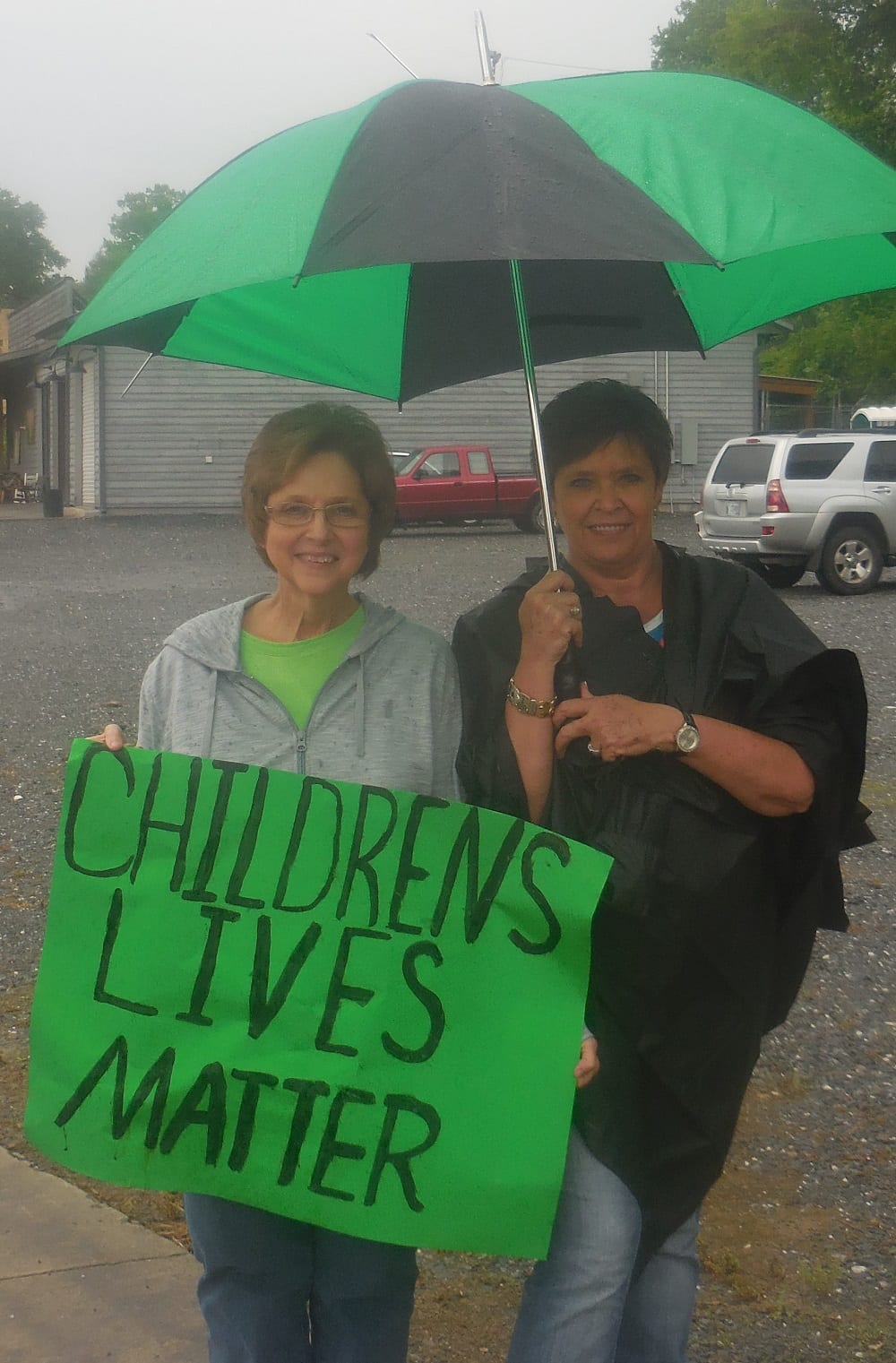 Vicki Rhodes of Morganton and Cathy Patterson of Mineral Bluff head to the Fannin Board of Education meeting.

Fannin County Board of Education held a three and one-half hour meeting on Thursday night, May 12th.  Two and a half hours were public comments about transgender bathrooms in Fannin County Schools. 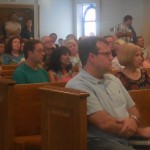 It was standing-room only in the high school cafeteria.  Even more people were in the gymnasium.  Fannin Rebel TV, the high school television station, broadcast the meeting live to the people in the gym.  Around forty people gave comments about transgender bathrooms and people who do not fit traditional male/female gender identity. Except for attorney Ken Fletcher, everyone who spoke lives in Fannin county, has children in the school system or went through the school system themselves.  By the amount of people at the School Board meeting, Fannin County sent a loud and clear message to the School Board that they don’t want transgender bathrooms in Fannin schools. There were no counter-protesters outside the School Board meeting or along the walk from the First Baptist Church to the Fannin County High School cafeteria.

The meeting opened with an invocation from the Pastor of World Harvest Church North in McCaysville.  During his prayer, he thanked the Board for being here to serve God’s will first to students’ well-being, education and protection.  Bobby Bearden, Chair of the Fannin County School Board reminded the audience that the Board will take everything you say under serious consideration.  He also said that the Board is not here tonight to vote on anything about transgender bathrooms.

Comments from the Fannin County Community – Parents, Students and Graduates

The overwhelming theme of the forty plus people who gave comments was about privacy and safety of the children.  Many parents asked the Board why the schools couldn’t have a third bathroom option for transgender students.  At least two parents said that if the school allowed transgender children to use the bathroom of their choice, they will sue the school to build a private bathroom stall for their children. Parent after parent said that they would pull their children out of the Fannin County School system if the schools have transgender bathrooms.  Some parents scolded the Board for putting federal funding ahead of their children’s well-being. If the Fannin County School System chooses to not have transgender bathrooms, the school system could lose $3.5 million in federal funding.

Almost every speaker identified him or herself as a Christian.  Most talked about how the Bible teaches two genders, male and female.  Some parents, like Deena Daughtery, said that they had moved to Fannin County because of its morals.  Many speakers said that they couldn’t believe that the fight over transgender bathrooms had come to Fannin County.

The pastor of Sugar Creek Baptist Church expressed sympathy for the School Board because they were between a rock and hard place in having to make a choice about transgender bathrooms.

Four people spoke on behalf of Fannin community members who don’t fit traditional male/female gender identity.  Xavier Eaton, a graduate of Fannin County, is transgender.  He said about his time in school, “Everything I went through here was torment.  You don’t know what it is like to be hated.”  He asked the audience to teach children to co-exist with things they don’t believe in.  Julia Pruitt, a Fannin County resident and self-stated lesbian, said that she was listening to ignorance all around her at the meeting.  As a Christian, she believes that Jesus left her with one commandment, “Love thy neighbor.” She told the audience that this (a transgender student) is somebody’s baby that we are talking about.  A therapist practicing in Fannin County told the audience that she was there to let students know that there are other children in Fannin and surrounding counties who are transgender and there are support networks students can reach out to.  She encouraged Fannin students to resist fear-based messages.

Some high school and middle school students spoke.  They indicated that students were not ready to accept transgender bathrooms at school.  Two 8th grade girls had the shortest and most simple comment about transgender bathroom.  It summed up what many parents said without a long explanations. The girls said, “I don’t want to go to the bathroom and see a boy there.” 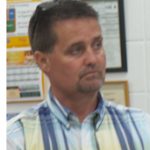 Anthony Walton, organizer of Fannin community members who disapprove of transgender bathrooms, spoke for about 15 minutes.  He had several main points.

First, was that people cannot serve God and money.  The Fannin school system needs to make a choice to follow Christian ideas and not be concerned about losing $3.5 million. People are letting the federal government control us with money.  He said that from teaching evolution to acceptance of transgender bathrooms, the US education agenda is immoral and it is time to say “enough!”.

Second, he see transgendered bathrooms as a slippery slope to allowing perversion in school.  He said that if we accept that transgender people are hard-wired to be different, then how do we know that schools won’t see pedophiles as people who are just hard-wired to be different.  Eventually the schools could end up hiring pedophiles to teach our children and there could be perverts in the bathrooms with our daughters and wives.  He gave several examples of how students participating in activities normally reserved for the opposite gender could upset school life.  He said these kind of situations make confusion for students.  What if male athletes play on female teams; what would this do to the playoffs?

He finished up his remarks by promising the School Board that your neighbors and friends in this room will stand with you until the bitter end.

Attorney Ken Fletcher, an attorney from Alliance Defending Freedom (see website) was there.  His organization is offering to assist the Fannin County School Board with developing a bathroom policy.  His idea is to have a private school clinic or faculty  bathroom that is open for transgender students.  He told the audience that people who have gender dysphoria live a life of heartache and that there is a 20% suicide rate among transgender people. Mr. Fletcher believes that forcing transgender bathrooms on people is an example of government overreach and transgender bathrooms are another example of President Obama’s executive actions that are forcing unacceptable moral changes in public schools.

Ms. Doss went on to tell the audience that if they really don’t want transgender bathrooms in the schools, they should take their fight to people who have the possibility to change this rule.   The Fannin County School System could refuse to provide transgender bathrooms, but the school system’s action has no power to change the law.  Ms. Doss encouraged everyone to write Gov. Deal and their state and national Senators and Representatives.  She thanked Georgia House Speaker David Ralston for taking a proactive stand for Fannin County.

At 8:30, two and one-half hours after public comments began, the Board was ready to move into new business.  First, everyone took a 15 minute break.  Then the School Board sat back down to do what it usually does at monthly School Board meetings: listen to and approve purchase requests, go over budget and hear about school programs. (read about the other topics on the School Board May meeting here)

Mr. Henson promised that everyone employed in the school system, from general staff to teachers to district administrators to the School Board, does everything in their power to keep students safe.  He promises that the School Board will do its best to find a workable solution over the summer.

He talked about the everyday problems that the controversy over transgender bathrooms is bringing to Fannin schools. He said, “If we let this tear us down, then it will.”  He talked about how the school system has so much going for it.  For example, this year’s test scores are in the 11% highest group in Georgia.  Fannin county schools have so much to look forward to said Mr. Henson.  Then, he  announced that the school system is purchasing the Farmer’s Market space next to Swan Drive-In for $350,000 and will build a state-of-the-art agriculture center, something Fannin’s agriculture programs have desperately needed for a long time.

Mr. Henson talked about the disruption this controversy is causing at one of the most critical times in the school year.  “We are only six days from the end of the school year… Everyone needs to calm down and back up.”

I will resign before I let this school system fall apart. – Mark Henson

Then, Mr. Henson said what he personally will do about the situation; “I will resign before I let this school system fall apart.”  This is an especially strong statement from Mr. Henson because he is a graduate of Fannin County schools, his father was high school principal here, his wife works at the school and his children attend Fannin County schools.

Mr. Henson’s comments also covered rumors floating around that Fannin County employees’ jobs are being threatened and the School Board has held secret meetings  to make decisions about transgender bathrooms.

Mr. Henson said that there had been no secret meetings of the School Board about transgender bathrooms.  Mr. Henson, the Fannin County School Board and school system employees pride themselves in how they run a very transparent school system.  Everyone they can read all documents, meeting minutes, school information and school system budget on Fannin’s School Board website. (click here to view the website) . The School Board did go into Executive Session at their workshop meeting on Tuesday.  But, it was to discuss land acquisition (the purchase of the Farmer’s Market) and personnel issues.  April and May is the time when school systems do most of their hiring.

Mr. Henson closed out his comments with thanking all the District Office employees who came out to support the School Board and the school system.

Finally, it was time for the last item on the agenda, School Board members’ comments about the meeting.

Steve Stanley promised Mr. Henson that “the cavalry  (the School Board) it going to stay right where it is at.”  Mr. Stanley is proud of the new agriculture facility coming to the school system.  He has worked closely with Future Farmers of America and seen how desperately the students need it.

Lewis DeWeese said he wished people knew about the caliber of people we have here.  “We are proud of our team.  All are top-notch God-fearing people who care about children.”

Terry Bramlett said that the people at the meeting tonight should share the same level of passion with representatives in Washington.  He encouraged everyone to write to state and national officials whose duty it is to make legislation about transgender bathrooms.  He shares Mr. Henson’s and Mr. Stanley’s enthusiasm about the new Agriculture Center and reminded the audience that agriculture remains the largest industry in Georgia.

Sandra Mercier said that when she thinks about this controversy, she looks to her personal inspirational statement which she has engraved on her bracelet:  “God grant me the serenity to change what I can, accept what I can’t and the wisdom to know the difference.”

The School Board meeting ended at 9:30.

“Fannin Board of Education: Superintendent Henson Will Follow US Law Regarding Transgender Bathrooms”

“Fannin Board of Education:  Superintended Henson Will Follow US Law Regarding Transgender Bathrooms.”

“March to Fannin County Board of Education”