BLUE RIDGE, Ga. – David Cooper will face off against Josh McCall for Georgia’s 9th congressional district seat Democratic nomination. The winner of the May General Primary will then run against Republican incumbent Congressman Doug Collins.

Collins has held the Georgia 9th Congressional District seat since 2013. 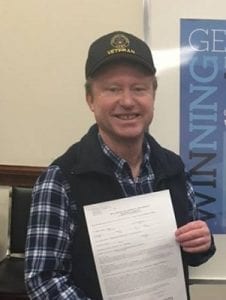 Cooper stopped by the Fannin County Democratic meeting to share with Fannin County residents why he feels that he is the best man for the job.
“I am soldier. I have served in the forces that have guarded this country and our way of life, and I am prepared to serve again,” Cooper introduced himself.

Holding a Bachelor’s degree in Political Science and a Master’s degree in Public Administration, Cooper has also had a career working various levels of government, is currently retired from the Environmental Protection Agency (EPA). During his employment with the EPA, Cooper worked in hazardous waste clean up and also worked in commercializing green options, such as, solar, wind, and geothermal.

“It is not about giving a speech. It’s not about making a list of here’s my issues, and wouldn’t it be cool if we could do these things. That is what every politician is taught to do,” Cooper said explaining he wants to see real accomplishments.

Cooper is convinced that there is no such thing as a single issue voter, and is confident that he can find common ground and common values among all residents of Georgia’s 9th District.

Cooper summarized his beliefs and his platform into three key elements, the first being a need to “save democracy”. He feels this can be accomplished by stopping fake news, ensuring clean elections, and implementing term limits.

His second stance is to “protect what we hold dear”. Cooper cited a few areas that deserve our attention and care, these being social security, medicare, women’s rights, the environment, veterans, and small businesses.

Cooper labeled his final stance as “progress for the future”. He would like to see steps made towards universal health care, common sense gun control, clean energy, fair taxes and affordable education.

Locally Cooper would like to work to support small businesses, citing that they are uniquely numerous in our area due to the tourism industry. He feels that one way to promote this would be to “energize the Small Business Administration to do more to support and provide more outreach.”

“Collins should not be making rules for anyone,” Cooper spoke of his Republican opponent, “His loyalties are not with the people.”

In the General Primary Cooper says the focus should not be about himself running against McCall but instead he advised the crowd, “You need to pick the person who can beat Doug Collins and who has a plan.”