Blue Ridge, Ga. – The proposed affordable housing project to be located on Mineral Springs Drive has come to a halt after a tie breaking vote denied the rezoning request put forward by the Beverly J. Searles Foundation.

Emotions were high in a full room as City Council listened to sides both in support and in opposition of the new project.

The crowd gathered at City Hall on May 11 showed overwhelming support of the proposed affordable housing project, where at the Planning Commission meeting held on May 4, citizens present then were mainly in opposition of.

Despite the opposition, the Planning Commission chose to move forward, recommending rezoning of the area from R2 residential to R3 high density residential, contingent upon suggestions made through the staff analysis. 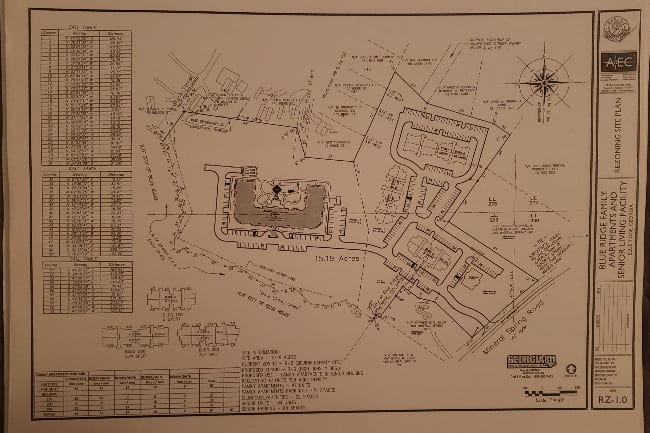 Among the supporters present at the City Council meeting were many who work directly with various charitable organizations in Fannin County.

“Without a stable place to call home, it is very difficult for working families to show up for work consistently,” Sherry Morris, Executive Director of Fannin County Family Connection, said of situations that she encounters daily, “I know it seems unbelievable but national statistics show that impoverished citizens work an average of 1.4 jobs. That’s right, it takes a great deal of working hours at service wages just to be poor. Let’s be a caring community and give a hand-up to our citizens.”

Philip Searles, President of the Beverly J. Searles Foundation, was also in attendance to give Council and the public a brief overview of the intended affordable housing units.

Searles took the time to address several of the concerns that had been brought to his attention during the Planning Commission meeting.

Of these concerns, Searles addressed specifically the danger of the intersection at Mineral Springs Drive and Aska Road stating that his foundation was willing to work with the county and offer $40,000 towards a solution to the area, such as a traffic signal.

Searles also addressed nearby residents’ concerns of increased crime once the units were occupied. According to Searles, the units would not be available for occupancy to anyone with a previous felony that is on record. Searles also stated that he had spoken with local law enforcement on the matter.

His foundation proposed that they would install a vehicle tag reader at the entrance of the complex. This reader would have a direct feed to law enforcement and police would be able to monitor whether any vehicle entering the premises is connected to an active warrant.

“I’m not expecting this to buy you all or make you all want me here, I get that, but I want to let you all know that I hear you all and I’m trying to do what I can,” Searles turned and spoke to a group of would be neighboring residents who had expressed concerns during the Planning Commission meeting.

Residents from neighboring properties still spoke in opposition and expressed concerns over the City’s infrastructure as well as decreasing property values.

Council Members discussed their concerns over the project, with Council Member Nathan Fitts stating that his main concern would be with the added traffic to the area.

Council Member Mike Panter questioned Searles over recently passed Federal legislation allowing for Federal Housing to be filled with persons outside of the general area. Searles assured Panter that this would not happen due to the need for the housing in Fannin County. 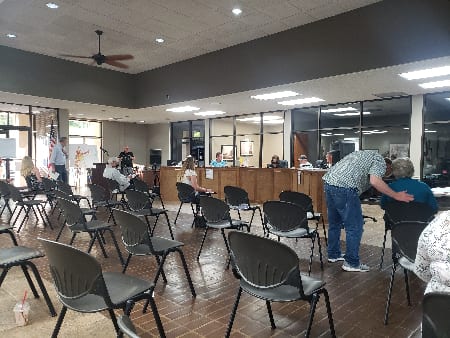 Crowd storms out of City Hall after rezoning request is denied.

Traver Aiken, Manager of the Blue Ridge Housing Authority, explained that the demand in Fannin County is great for this type of housing. All of the Housing Authority units are currently occupied and according to Aiken there is a waiting list of approximately 70 applicants.

“I’ll be honest with you. I’m not ready to make a decision,” Panter stopped Council Member Nathan Fitts before a motion was made to vote, “We just got the report from the Planning Commission today.”

Discussion began of the legalities of tabling the rezoning request.  Tabling would allow Council Members more time to research the topic.

With no clear guidance on whether delaying the vote was within the legal powers of the City Charter, Fitts motioned to accept the rezoning request with prior contingencies in place.

Council Member Rhonda Haight recused herself from the vote as she is the current owner of the property located on Mineral Springs in which the affordable housing complex would be built.

Mayor Donna Whitener cast the tie breaking vote in opposition of the rezoning request: “I don’t think anybody here is opposed to affordable housing but I just think that if we had had some more information, it would have been a little better. I would have liked to have known what this number is for sewer, so I vote no.”