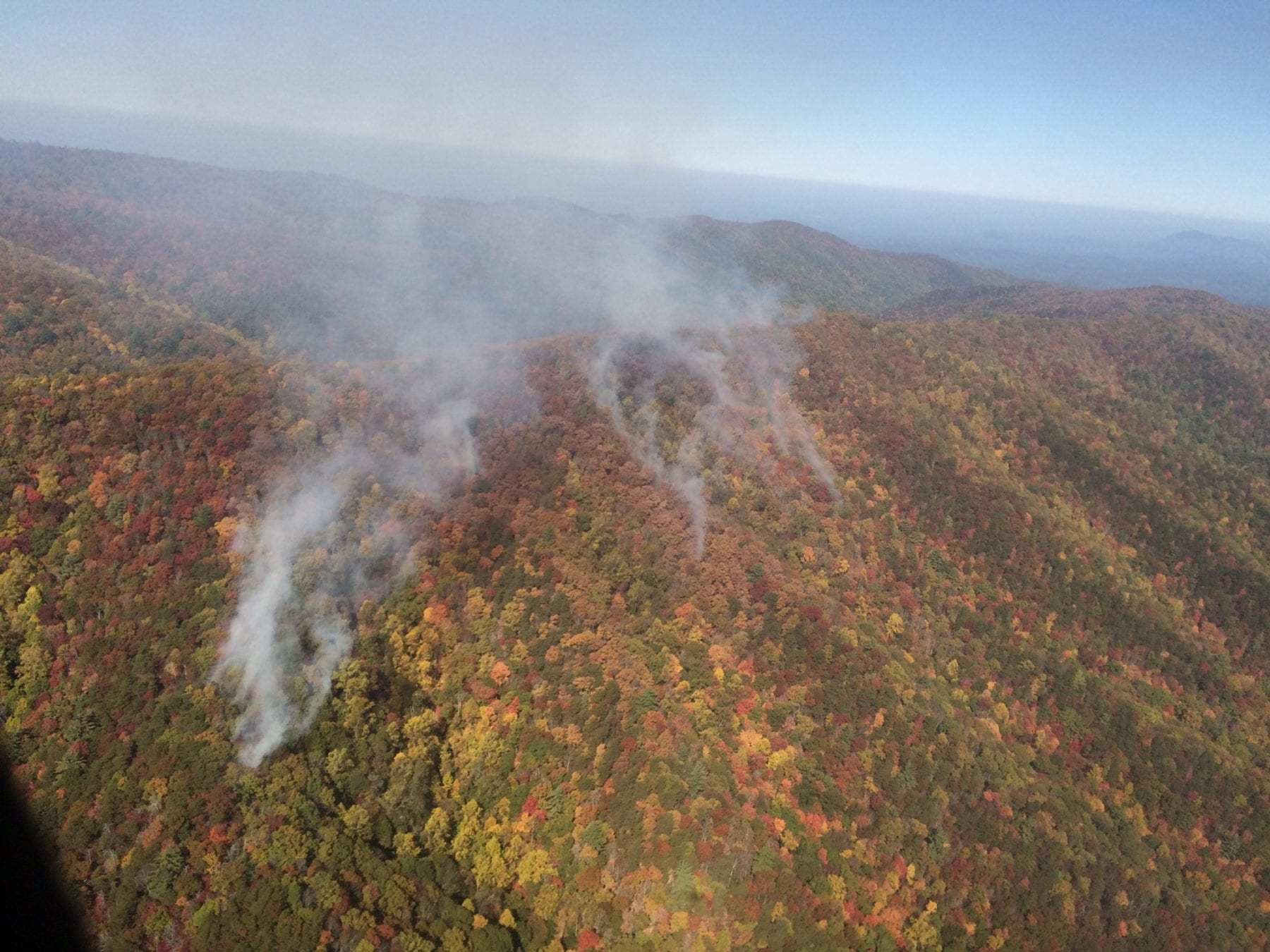 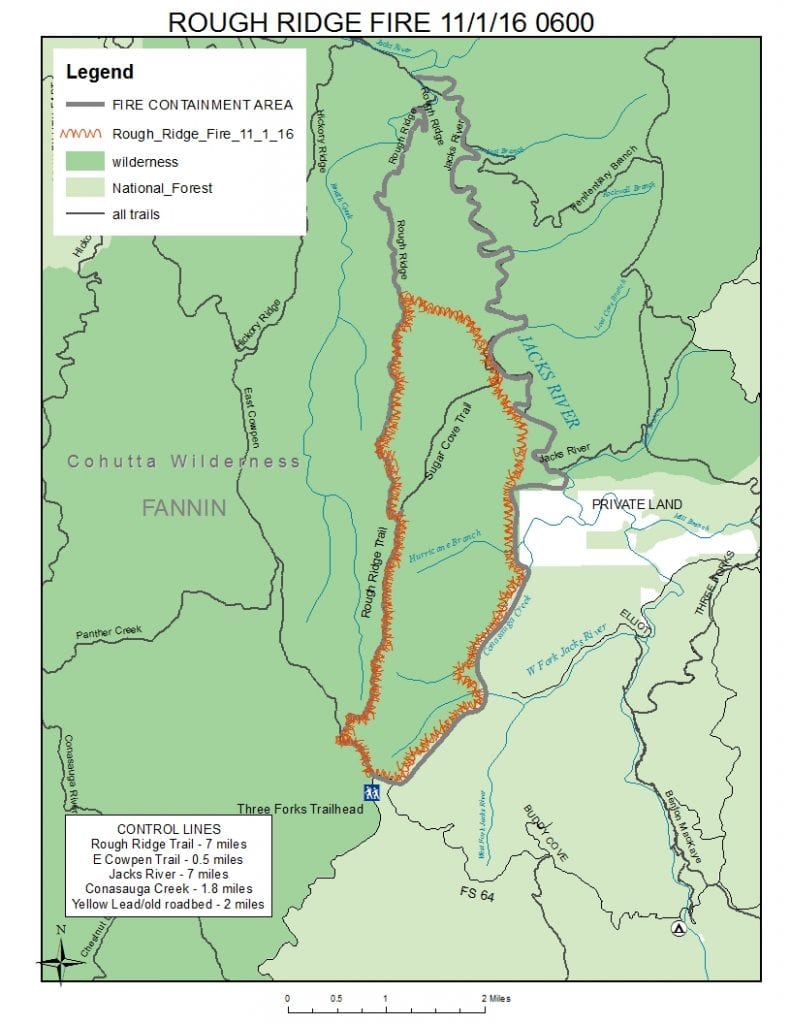 As of Tuesday evening, the Rough Ridge wildfire was at 2,771 acres. The main part of the fire is on the east side of Rough Ridge trail and is moving on a north, north-east track following the ridge line. The northern extent of the fire is near Crooked Dogwood Gap. Fire has backed down to the Jacks River all the way to Sugar Cove Branch.

Estimates from last week was that it would be about 3,000 acres in size.  Gardner now says that the fire will exceed 3,000 acres but did not provide information on how large the fire could become.

On the east side, embers from the fire crossed Conasauga Creek and ignited roughly 40 acres.  Two other spots crossed the control line west of Jones Settlement and were contained at 2 and 15 acres.  USFS used bulldozers to make a clean fire line around these areas.  Crew members camped at the control lines east of Consauga Creek so they could walk the fire lines day and night.  Fannin County EMA sent trucks to the area yesterday in case the spread outside into Jones Settlement. USFS is also conducting water drops on the western edge of Jones Settlement.

Jones Settlement contains about 25 cabins.  According to Gardner, it is the only piece of property in Fannin County that backs up to the Cohuttas.  The rest of the wilderness is surrounded by National Forest.

USFS is now conducting water drops on the fire to keep its heat down.  USFS is using two helicopters to make the drops. One has a 150 gallon capacity and draws its water from a bucket filled at Lake Ocoee.  The other has a 2,880 gallon capacity and uses a snorkel which sucks water up from the lake.  Both helicopters are using Lake Ocoee as it is five minutes by air from the fire area.  Lake Blue Ridge is much further.

Within a Wilderness Area, fire crews must use fire control methods that have minimal impact. USFS’ overall plan is to control the fire with natural barriers like Jack’s River, Conasauga Creek and Rough Creek and man-made fire breaks such as Rough Ridge and East Cowpen trails. In total, USFS has established 15 miles of control lines, which included natural and man-made fire breaks. Fire crews daily hike the natural and man-made fire breaks to clean the breaks of leaves or dead fall which fire could use to travel over the breaks.  Crews are also igniting back fires from the fire breaks with the idea that the back fires will burn up all the fuel between it and the main fire, leaving the main fire with nothing to fuel it.   USFS is also conducting a daily fly-over of the fire.  The site of the fire is an extremely remote, rugged area with limited access.  Crews must hike in all their firefighting equipment like shovels and saws.

A lightning strike ignited Rough Ridge fire in mid-October.  Gardner said that lightning strikes only start 3% of the fires in the Cohutta Wilderness Area.  The other 97% of fires are human-caused.  In fact, Conasauga District rangers are now dealing with fires in the western part of their district and have brought in a fire management crew to oversee the Rough Ridge fire in the Cohuttas.

Gardner says that Fannin County can expect Rough Ridge fire to burn for a while.  The next predicted rain is in the middle of November.  Other weather services say that north Georgia’s drought could last through winter.

The fire burns more slowly in the morning hours due to higher humidity and lower temperatures.  In the afternoon, low humidity and higher temperatures cause the fire to pick up again.  Wind directions change day to day, so different communities may experience smoke impacts on different days.

A burn ban for Fannin County started on Oct.22nd. There should be no outdoor burning of any type including fire pits, campfires and burn barrels. On Oct. 23rd  a smoldering fire pit on an outdoor deck in Gwinnett County started a fire which engulf the house, killing all five people in the house. Fannin County EMA and Fire Department remind residents one floating ember can start a fire.

Current closures associated with the Rough Ridge wildfire include: