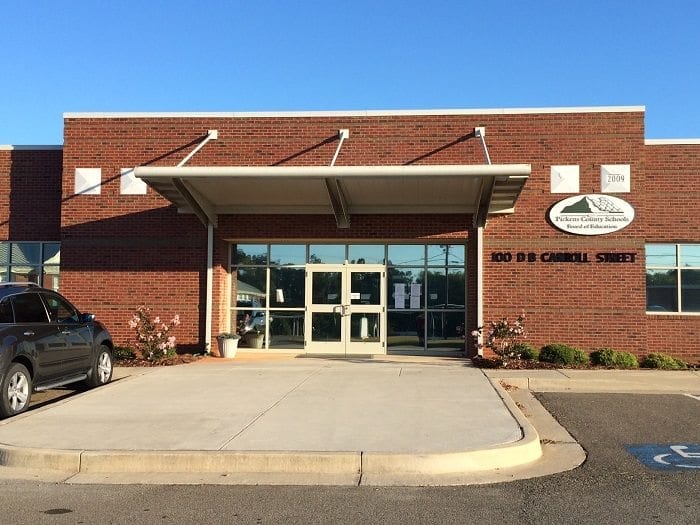 JASPER, Ga. – It took a little more than a month for the Pickens County Board of Education to release the financial fallout regarding the termination of Dr. Rick Townsend and the future contingency plan. Consequently, it leaves many hesitant to trust the board after some members reversed course from their original expectations.

In previous statements, Chairwoman Sue Finley had hoped to retain Townsend in a different capacity while trying to find a budget-neutral solution. After weeks of back and forth between both Townsend and the school board, it was clear that both parties were not going to get what they wanted.

On February 26, Phil Landrum, attorney for the Pickens County School Board, issues a Press Release that quickly went viral. In the one-page letter, Landrum starts by highlighting the reorganization of the front office. The reorganization strategy was inspired by Tony Young, the school system’s acting Superintendent. Young’s plan, pitched in a previous interview, called for eliminating the Assistant Superintendent’s position and the Chief Officer. The school system hopes to save $565,604.88 over the next couple of years between those two positions.

Landrum went on to say that the citizens should ultimately see a net benefit after a heavy loss the school system is set to take from the payout of Townsend. The school system will have to pay Townsend two years of salary at $406,014.73. After FICA payments and Workers Compensation payments are made, taxpayers can expect to pay $421,699.50 in total. For many vocal citizens that opposed this decision, this was an inevitable fear come true.

In a post made through a social media group Impact Pickens, Brian Rittenberry also acts as an administrator to said group vowed that he would proceed with a petition to recall some of the Board of Education members. In a conversation with Election Supervisor Julianne Roberts, any petition would exclude Tommy Gartrell and Steve Smith because a recall cannot be made on an elected official in their first, or last, 180 days of their term in office.

“We’ve obviously been overspending this entire time, no surprise there,” said Rittenberry. “Please y’all, discuss this with your neighbors and get folks ready! A petition is coming!”

Roberts confirms that no one has requested a petition from her office.

While opposition to the board decision made some take a proactive approach, Townsend took to his social media account to say that he’s ready to move on from the issue.

“Yes, I’m disappointed I’m not able to complete some of the goals that I had, but I’m glad I had the opportunity to lay the groundwork for future change in Pickens,” said Townsend. “There was no wrongdoing on my part and I fell victim to politics, but knew that was a possibility when I agreed to accept the position. It’s time to move on and continue to make a positive difference in the community and spend more time with my family.”