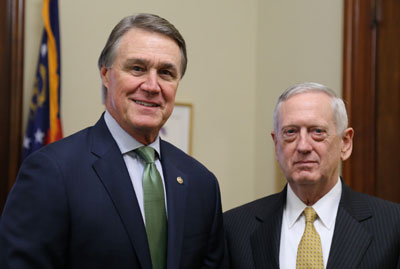 “General Mattis is a highly experienced and decorated military leader. He fully understands the principle of civilian control of the military, which is so important to our democracy. With his experience, I believe General Mattis is the right person given the challenges of our time. His decades of experience and strong leadership will be absolutely essential in helping America deal with its global security crisis. This crisis ranges from symmetric threats like Russia and China, and asymmetric threats like the global war on terrorism and ISIS. Today, we also face growing nuclear threats from rogue nations like Iran and North Korea, as well as hybrid warfare developments ranging from cybersecurity to the arms race in space.”

“Additionally, my home state of Georgia plays a strategic role in the defense of our country with nine military installations. I stand ready to work with General Mattis in making sure that we continue to fulfill our strategic requirements in Georgia and around the world. I strongly support his nomination, and I look forward to partnering with him as we deal with this global security crisis directly.”

Senator Perdue is scheduled to participate in General Mattis’ confirmation hearing on Thursday, January 12 at 9:30 AM. Watch LIVE via C-SPAN.