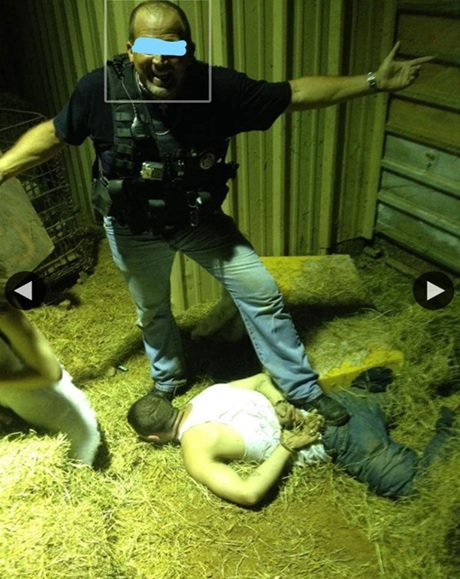 From Under Arrest to Under The Sea: One Man’s Second Chance Through Drug Court

The bounty hunter had finally found his man and was posing with his foot on the suspect’s back like he had just captured the criminal of the century.  The running was now over for Cory Chastain.

Cory never intended for his life to turn out this way. He dreamed of playing major league baseball and was a good player in his youth. Cory says, “I can remember watching the Atlanta Braves, and my mind could see my future self on third base where Chipper Jones played.” However, he also had a backup plan.  Cory was a big fan of the late Steve Irwin, known as The Crocodile Hunter.  If his baseball dream did not work out, he decided that he would study biology and work in animal conservation. However, as Cory says,“life changes people.”

Cory was raised by his father and grandparents. For a period of time Cory says they “raised him well,” teaching him about the bible and taking him to church.  However, his family also had their own demons, addictions to prescription drugs. The type of day Cory would have depended on his family having their medication. As with most addictions, things worsened, and one day while Cory was playing in an All-Star baseball game, his father passed out on one of the benches. Cory remembers, “it took every drop of energy I had to show my face again,” but he loved baseball and continued to play.

Cory’s mother spent time in prison and was not always around. When she was not incarcerated, she dragged Cory from place to place looking for drugs.  According to Cory, “I would wake up in strange houses, being very hungry, but too shy to ask for food.” Cory says this lifestyle took a toll on him and he realized he was developing feelings “he didn’t want to feel”.  When an unexpected tragedy struck, the murder of his Aunt Brenda, Cory believed “something changed inside me. Something for the worst.” At 15 years old, Cory did methamphetamine for the first time and found that all of the feelings he did not want to feel were now gone, at least temporarily.

Cory reestablished a relationship with his mother because they now had something in common-methamphetamine.  They used together regularly.  Cory says, “The fun started becoming misery, leading to arrest after arrest.” As the addiction progressed, and the arrests piled up, Cory met a man, a “connection who I thought I could make myself a name with”.  Cory tells of an offer of $10,000 he could not refuse.  Guns were involved and he knew if anything went south they would kill him.

Cory just describes the deal as “going south” and that his connection got busted in Atlanta.  Cory knew they would be coming for him, so he did what he did best. He ran. By this time, he had police detectives, bounty hunters, and now gangsters looking for him. Police were kicking in doors of his acquaintances looking for him.  Bounty hunters were doing the same.  However, the men Cory was most afraid of, the men he called the gangsters, finally found him. Cory was on a four wheeler he used to navigate back woods trails to avoid being detected.  The men he owed money to found him on a road while on the four wheeler and ran him down with a “souped up Chevrolet at 60 mph.” The vehicle ran over him but he was able to get up and run, and full of adrenaline, ran across all lanes of I-75. He says he ran so hard and long he eventually passed out and woke up during the night to the brightest moon he had ever seen. Cory says he cried out to God asking him why he let him live.  Cory said he felt God say “because I love you.”

However, Cory was not done running.  He found a man that he thought he could trust that let him hide in his barn. Cory made a trap door in the floor of the barn to hide if needed. The police eventually found the barn but could not find Cory because he was well hidden under the trap door. The police were there for two hours searching but they could not find him. Cory said “There is a scripture that says God pulled me out of the miry clay. I heard that still small voice just like I did on that full moon night. That voice that said ‘I love you.” The police walked right over my trap door and it fell through. They had me, and the whole world was lifted from my shoulders. I was done running”

Cory’s mom had been clean for the last two years and was in a program called drug court in Ellijay.  She told Cory this program had changed her life. Cory did not think Bartow County, where he was incarcerated, would allow him into drug court because he always ran when he was released from jail.  And they didn’t.  They refused to allow him to participate.

However, Cory’s mom did not give up and Cory never stopped praying. Two months later, he received the paperwork stating he was accepted into the Appalachian Judicial Circuit’s Drug Court. A week later, Cory was sentenced to twenty years with two to serve in prison with serve time suspended upon completion of drug court in the Appalachian Judicial Circuit. Cory left the Bartow County jail with a pair of blue jeans the jail had given him, a white T-shirt, and a few books, including his bible.  He was beginning a new journey that would start at the drug court’s men’s facility in Ellijay, The Depot.

Cory would live at a very structured life at The Depot for months while attending drug court treatment classes, 12 step meetings, and bi-weekly status hearings in front of Chief Superior Court Judge Brenda Weaver. He obtained a full time job at the local chicken plant. He excelled at his job and was soon promoted. After four months of living at The Depot, he was able to move in with his mother. They were both now sober. At age 27, he was finally able to obtain a driver’s license for the first time. In March of 2016, Cory passed his GED test. On November 17, 2016, Cory Chastain graduated from drug court and had been sober over two years. However, this wasn’t the end of his journey.

Cory was accepted into an underwater welding school in Jacksonville, Florida.  He was turned down for all known financial aid.  However, he did not give up, and the

school agreed to finance his classes if he could put several thousand dollars down. Cory saved the money, and with his probation officer’s permission, took off to Jacksonville to start the road to a new career as an underwater welder. Cory says that he used to be amazed watching Steve Irwin working around crocodiles.  He had forgotten the dream of one day being like Steve until a recent training dive. Cory turned around while diving only to see an alligator, about 7-8 feet long, about 25 yards from him.  Cory simply said, “All I could do was smile. I wasn’t scared. I was living a dream that I asked for many years ago. I now know that God had never forgotten my dreams.” 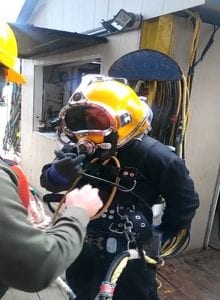 Cory gearing up for a dive 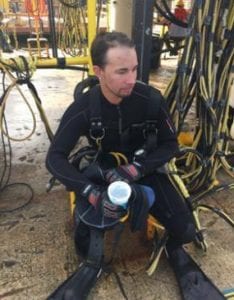 Cory Chastain during the early parts of his training 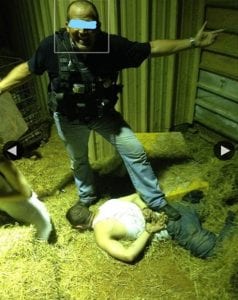 Photo of Cory taken right after his capture.  The man in photo is a bounty hunter.