ELLIJAY, Ga. – Rescheduling has completed for a spring time celebration in downtown Ellijay with the St. Petrick’s Day event. Put on in partnership with FOGAS (Friends of Gilmer Animal Shelter) and the Gilmer Chamber, the event was cancelled on its original March 12 date for 2022. 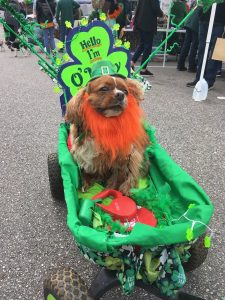 However, the event is returning in one month to make up for the cancellation. With snow and high winds forecasted, much of the event would not have been able to go on. FOGAS members were concerned for pets and citizens to hold the event on its original date.

Through continued comments and questions on social media, many asked for a reschedule instead of a full cancellation. Unfortunately, a very booked April means the reschedule won’t occur until April 30, 2022. FOGAS Vice-President Sylvia Harris stated that they did not want to interrupt or pull away from any other events in Ellijay and this weekend, as the last weekend in March, will host their Pet Vaccination Clinic and Spay/Neuter Day.

With so many events going on in the early spring, Harris said that the month will be very busy. However, she said they have been very fortunate in that the majority of the vendors and events have confirmed to be joining the rescheduled St. Petrick’s Day. Pets are also adoptable throughout the event from the Gilmer County Animal Shelter, Pickens County Animal Shelter, and Homeward Bound. Other pet rescues will also be present for the day showcasing their rescues including goats, llamas, and horses.

Additionally, they have managed to keep the celebration events the same. The event goes from 11 a.m. to 3 p.m in the parking lot behind Dalton State College, but the parade through downtown begins at the Ellijay Elementary School at noon. Registration can be done online or in-person if you arrive early before the parade. Additionally, for those looking to potentially adopt a pet, you can “test-drive” adoptable pets from animal shelters or Homeward Bound. 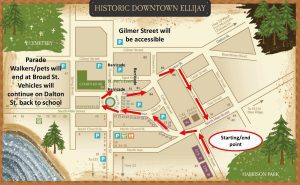 Harris also noted that the parade will go from the elementary school, to the square along North Main Street, around the square and down Dalton Street, and then returning to the school via Teem Street and North Street again. They have noted that the Parade Walkers will be exiting the parade at Broad Street but Parade vehicles & floats will continue down Dalton Street and back to McCutchen Street.

Even an off-season visit from Semper Fi Santa will be happening at the event. Despite the day, FOGAS is returning to the Irish holiday for citizens and visitors alike to join in.

While most of the vendors are returning, a few openings were left and the St. Petrick’s Day Celebration is accepting both vendor and parade participant applications. An additional food vendor offering vegetarian and/or vegan options is also desired. Vendor fees are set at $40 with electricity and $35 without electricity. Joining the parade holds a $5 walker fee and a $25 float, vehicle, or group fee.